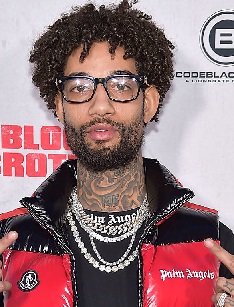 PnB Rock (real name is Rakim Hasheem Allen) is a famous American rapper, songwriter. The musician is mostly known for his top tracks «Fleek», «Changes» (feat. XXXTENTACION), «Before It All Disappear», «Come And See Me» and «Selfish.» In his career, PnB Rock has collaborated with many rap icons, such as Lil Baby, Post Malone, Lil Skies among others.

However, the musician had not always been famous and lived in wealth. His life was full of ordeals and problems he has managed to get through. Are you interested in PnB Rock’s biography now? It’s high time for us to introduce the rapper to you!

Rakim Hasheem is from Germantown, Philadelphia, Pennsylvania. He was born there on December 9, 1991, to the family of Raymond Allen and Vivian Allen. He had two older brothers, and two younger brothers, one of them is now deceased. When PnB Rock was 3, his family faced a tragedy - in order to earn a living, his father became involved in illegal activities and was killed in a gang feud. His mother was burdened with all the responsibility for the poverty-stricken family. She frequently checked into shelters with her children, and Rock spent most of his early days in these shelters.

His mother later moved him to Northeast Philadelphia. At an early age, he liked music by 2Pac and R&B group Jodeci. Interestingly, young Allen was academically good and a highly popular kid. Many students followed him around. However, this very popularity led him to score poor grades and made him drop out of school.

Besides, Allen was a difficult teenager. As a 13-year-old kid Allen was sent to a youth detention program for committing robberies and fighting in school. At the time, his uncle, who was taking care of the family, died in a gang war, and this turned Rock's life upside down. At the age of 19, he came to prison again – he was accused of drug possession and other crimes and spent 33 months in jail. Inspired by his life ordeals, Rock started writing lyrics in prison. He was determined to start a new life once he was out of prison. Having left it, the future star was alone, had neither money nor a shelter.

As soon as he found a place of living, he started uploading videos on Instagram under the hashtag #tbh, a viral trend that allows people to sing about other people's pictures.

Later Rakim Hasheem made up his nickname – it is an abbreviation for Pastorius and Baynton, a street corner near where he grew up in Philadelphia's Germantown neighborhood.

2014 is thought to be the beginning of Allen's career. So, on June 24, the celebrity released his first mixtape entitled «Real N*gga Bangaz.» Interestingly, the project was elaborated when the musician was incarcerated. The following year was successful for PnB Rock – he was signed to Atlantic Records. Together they published his third mixtape called «RnB3.» In June 2016, the musician pleased his fans by releasing single «Selfish.» The track got to the No. 51 on the US Billboard Hot 100. In October 2016, Allen was included in Rolling Stone's list of «10 New Artists You Need to Know.» Besides, that time he arranged his first career concert tour.

On January 10, 2017, PnB Rock added the second album «GTTM: Goin Thru the Motions» to the list of his projects. The collection was recorded through Atlantic Records and Empire Distribution. The collection finished 28th on the US chart. In 2017 the rapper succeeded to take part the soundtrack «The Fate of the Furious» with two singles including «Gang Up» with Young Thug, 2 Chainz and Wiz Khalifa and «Horses» with Kodak Black and A Boogie wit da Hoodie. He was featured on the annual «Freshman Class» list of 2017, released by XXL. Finally, in November 2017, after years of working on mixtapes, PnB Rock published his full-fledged debut album, titled «Catch These Vibes.»

The album's title and the cover art were released by Rock in September 2017, on his Twitter account, and the collection consisted of 18 tracks. Many of the songs were done in collaboration with other artists, and the album is still enjoying a successful run in the market.

PnB Rock took part in the recording of «Cross Me» included in Sheeran's future album «No. 6 Collaborations Project», along with Chance the Rapper.

He was arrested on January 20, 2019, following the execution of a search warrant on his home in Bensalem, Pennsylvania. Allen was charged with possession with intent to deliver, possession of narcotics, receiving stolen property, and several related offenses.

Musician’s net worth is evaluated at $2 million.

It is obvious that PnB Rock has had a difficult past, which he never shies away from talking about, in his tracks. Most of his top songs are autobiographical in nature, and he says that he is here just because of his past and he would not change a thing even if he could.

Rock prefers to keep his relationships secret, but he seems to have a girlfriend. It was once that he started a romantic relationship with a girl when he was 15 years of age. They broke up in 2009 when he was sent to jail, but he admits through his song lyrics that he has never been in love ever since.

PnB Rock has a daughter, Milan, who was born in October 2013.