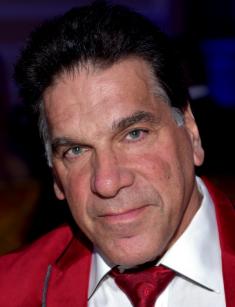 The American bodybuilder, who won such high-profile titles as " Pro Mr. America" and "IFBB Mr. Universe," Lou Ferrigno had success on the big and small screens, becoming a star of various American TV shows and blockbusters about the adventures of the superhero Hulk. The peak of his popularity fell on the eighties and nineties of the XX century. But now he continues to delight fans with new roles in the movie.

Louis Jude Ferrigno was born on November 9, 1951, in Brooklyn, New York. His parents are Victoria and Matt Ferrigno. The boy's father was from Italy originally, worked in the local police.

Lou's childhood was overshadowed by the effects of his illness at the age of 2 or 3: he lost about 80% of his hearing because of the infectious disease. As a result, the hard of hearing boy was ridiculed by the local kids.

"They called me Deaf Louie and teased otherwise," bodybuilder remembers.

However, later, becoming famous, Lou will say that hearing loss helped him to find his place in life, to focus on his capabilities. Resenting his peers, the boy found solace in reading. He reread all the superhero comics (especially Spider-Man and the Hulk), imagining himself on their place.

Soon the desire to defend himself led him to the gym. At the age of 13, the teenager started to train; he was inspired by the example of the main character of the film Hercules, which Steve Reeves played, who was the main icon of the bodybuilders at that time.

Bodybuilding for young Ferrigno was not a whim. The guy went to his goal persistently and spent all the time in hard training. In 1969, Lou won his first title, becoming "Pro Mr. America" among juniors.

Four years later, in 1973, Lou celebrated his first adult victory, the title "IFBB Mr. Universe" and was a new star of bodybuilding, known for his outstanding physical data as Big Louis (the athlete is 77 feet (196 cm) tall, he weighs 286 lbs (130 kg).

In 1974, Lou took part in the competition "Mr. Olympia" but he gave in to Arnold Schwarzenegger and took the 2nd place. Next year, the history repeated, only this time Ferrigno got the 3rd place on the podium. The documentary film Pumping Iron was released, about this confrontation between Arnold and Lou in 1975.

Despite sporting success, Ferrigno could not earn a comfortable living. He had to work in the specialty: the man was a sheet metal worker at one of the Brooklyn factories. But one day, his colleague cut off his hand with a machine in front of Lou and the bodybuilder left the factory and never returned to his profession.

The career of a defensive lineman for the Toronto Argonauts in the Canadian Football League takes place in a short episode of his biography but the athlete left the ranks of legionaries after a severe leg injury. Ferrigno briefly returned to bodybuilding in the early nineties, deciding to compete for the title "Mr. Olympia" but he left professional sports, taking the 10th and 12th places in two competitions.

In 1976, Lou Ferrigno was invited to star in the series The Incredible Hulk based on Marvel Comics. It happened with the filing of Arnold Schwarzenegger, who refused this role, as he already starred in Conan the Barbarian but offered to the producers the candidacy of Lou, his rival in the competition "Mr. Olympia."

The series was released on the screens from 1978 to 1982 and brought the new actor incredible popularity. This work made Lou and Bill Bixby friends; he played the professor David Bruce Banner, whose alter ego was the green-skinned monster Hulk. Ferrigno called Bixby, his teacher in the acting profession.

Lou's next works were Italian projects: in the film Hercules about the adventures of a mythological hero, as well as the fantasy film I sette magnifici gladiatori, where the ex-bodybuilder played the main role.

A real triumph awaited Ferrigno in the late eighties. He plays Sinbad in the adventure Italian-American film Sinbad of the Seven Seas and also plays in the criminal action movie The Cell. The hero of Lou in this tape is a former officer, who went through the war in Vietnam and joined the fight with the mafia in peace.

Since 2000, the actor played himself in the sitcom The King of Queens for seven years, this film tells about the life of a funny couple Doug and Carrie Heffernan. In 2003 and 2008, when the Hollywood films of the adventures of the Hulk were released with Eric Bana and Edward Norton in the main roles, Ferrigno was also invited for an episodic role of the guard and voiced the Hulk. Despite the appearance of other performers of this role, Lou believes his Hulk is the best.

"I was the first, who showed this superhero's muscles on the big screen and made it believable. I don't think anyone else can play the Hulk the way I did," he admitted in an interview.

Despite his advanced age, Ferrigno is still in great shape and stares a lot, although not as often as in his youth. In 2015, the role of the king Skizurra in the adventure film The Scorpion King: The Lost Throne appeared in the filmography of Lou. In 2017, fans enjoyed the episodic role of Lou in the web series Con Man and the thriller Enter the Fire in 2018.

The personal life of the actor and the bodybuilder as successful as his career. However, not on the first try. In 1978, Lou married a woman Susan Groff. However, the couple divorced a year later.

Ferrigno's second wife is a psychotherapist Karla Green, who later was the actor's manager. They have three children in this marriage: Shanna (1981), Louis, Jr. (1984) and Brent (1990). The eldest daughter is also an actress and Louis, Jr. plays football.

In 2019, Lou Ferrigno will appear in the comedy Purge of Kingdoms and the TV series Can’t Go Home. Also, the actor is busy with work in several new screen projects: Ring Ring, Cranial Sacral and Cross 3. Lou Ferrigno has a net worth of $12 million

The actor is not too active on "Instagram" because of the large employment but his fans fill the gap in his life: they organized fan pages of their favorite artist on social networks and published new photon from his life.