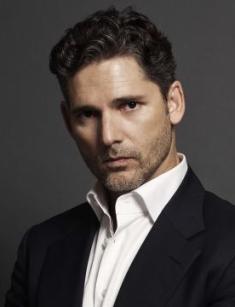 Eric Bana is an Australian actor, who became famous for the sketch comedy series Full Frontal and the thriller Chopper, and then increased his popularity thanks to the films The Time Traveler's Wife, Star Trek, Troy, Black Hawk Down.

Eric was born in Melbourne. However, the boy did not grow up in the metropolis, but in a cozy suburb of Tullamarine. Eric's father, Ivan Banadinović, was an immigrant from Croatia and served as the lead logistics manager for an agricultural machinery manufacturer. His mother Eleanor has German ancestry and worked as a hairdresser. The family also brought up the eldest son, Anthony.

Bana later recalled that he was often bullied at school because of Eastern European origin, and the young man began to hate racism and Nazism. By the way, at school, Eric studied quite well, although he paid more attention not to lessons, but jokes and tricks. The teenager was great at mimicking teachers and classmates, which entertained his friends.

After graduating from high school, Eric Banadinović did not enter college but found a job. The young man had a chance to change many professions. He washed cars, was a laborer in the port, collected trolleys in a supermarket, was a barman at a pub. While working as a bartender, the young man came on the stage for the first time. The bar held a comedy competition, and Bana performed as a stand-up comedian. After that, the young man continued his stand-up gigs, performing mostly in cheap bars and small hotels for two years.

At the pub, Eric Bana was noticed by the famous Australian showman, Steve Vizard, who offered him to perform in the late night talk show. The young man gladly accepted the invitation and made his television debut in 1993.

Later, the leaders of the sketch comedy series, Full Frontal, paid attention to the promising comedian. Eric Bana began to appear regularly in this program, and he often wrote jokes and scripts for the episodes. For three years, Bana worked in the TV project, became known in the country, launched his sketch comedy series The Eric Bana Show, and even received the first Logie Award for "Most Popular Comedy Personality."

It seems that Eric Bana’s career developed thanks to lucky circumstance. The young man did not even think that his biography would have such bright events. At first, Eric unexpectedly became a comedian; he did not try to make it into television but was invited there. His career in the film industry developed in the same way. In 2000, the director began filming the biographical thriller Chopper about the famous Australian criminal, Mark Brandon "Chopper" Read. Since it was impossible to create such a movie without the participation of the maniac, the management decided to consult him.

The man said that he would cooperate under the sole condition that comedian Eric Bana, whose show he loved, would portray him in the film. To prepare for the role, the actor had not only to shave his head but also to gain 28.66 lbs. (13 kg). The movie was successful, and Eric began to receive new proposals, including from Hollywood directors.

Soon, the actor co-starred with Josh Hartnett in the war drama Black Hawk Down. In the early 2000s, director Ang Lee invited Eric to play the leading role in the fantasy action movie Hulk, which was based on the Marvel Comics. The title character is scientist Bruce Banner, who turns into a green monster when he feels stressful. A year later, the epic war period film Troy was released, in which Eric Ban got the role of Hector, the elder brother of Paris (Orlando Bloom). The honest and courageous warrior was destined to die in the battle with Achilles (Brad Pitt).

The battle scene received the MTV Movie Award. The total production costs were approximately $170 million, which made Troy one of the most expensive films produced in modern cinema. It grossed around $500 million worldwide.

In 2005, Steven Spielberg released the drama Munich about the fight of special services against terrorist organizations. Eric Bana played the title role again. This time, the actor portrayed a Mossad agent, Avner. A year later, Bana showed his dramatic talent, paying Romulus in the Australian film Romulus, My Father.

Eric Bana starred in the melodrama Lucky You, alongside Drew Barrymore and Robert Duvall, and worked with Natalie Portman and Scarlett Johansson on the historical drama The Other Boleyn Girl. Viewers liked the characters of Eric, Saoirse Ronan, and Cate Blanchett in the action-adventure thriller film Hanna.

At the end of the 2000s, the actor's filmography included a lot of bit parts in the tragicomedy Funny People, the science fiction film Star Trek. In the fantasy film The Time Traveler's Wife produced by Brad Pitt, the actor played the leading role of librarian Henry DeTamble, who suffered from a rare genetic disease. Rachel McAdams portrayed his wife, Clare.

While working on television, Eric Bana met journalist Rebecca Gleeson, the daughter of Murray Gleeson, Chief Justice of the High Court of Australia. The young people dated for two years, and then Eric won a tour around the USA from Cleo Magazine after being named their "Bachelor of the Year." Bana asked the young woman to join him on a trip to the United States.

During this trip, the young people got even closer. In the end, Eric made a marriage proposal to Rebecca. They got married in 1997 and still live happily in their house in Melbourne. Eric Bana is satisfied with his personal life and is not going to change anything. The family raises a son, Klaus, and a daughter, Sophia. Bana’s friend is considered to be the equally popular actor, Hugh Jackman, whom Eric has known for many years.

The actor is a sports fan. Since childhood Bana has been keen on Australian rules football and supports the St Kilda Football Club. It is funny that now Eric is called "Saints Number One Ticket Holder" and the actor’s name is even mentioned in the tickets.

Bana is also a fan of motor racing, and as a teenager, he participated in motor racing competitions. For almost 30 years the actor has kept his first car which competed in Targa Tasmania, a week-long race around Tasmania.

Eric Bana pays great attention to the quality of projects in which he plays. The actor chooses only those scripts that he likes. Eric played the coast guard station's commander, Daniel Cluff, in the disaster film The Finest Hours, based on real events and released in 3D format. In 2016, Eric Bana and Rooney Mara appeared in the Irish drama The Secret Scripture. The same year, he also played in the comedy Special Correspondents, alongside with Ricky Gervais.

In 2017 the Australian actor’s credentials included roles in the film King Arthur: Legend of the Sword and the thriller The Forgiven. In 2018, it became known that Eric Bana would once again play in a war thriller, in which he would portray a Mossad agent. The film will be titled The Operative; Diane Kruger will be his partner on the site. Eric has already worked with the actress in the movie Troy.

Eric Bana has a net worth of $40 million.