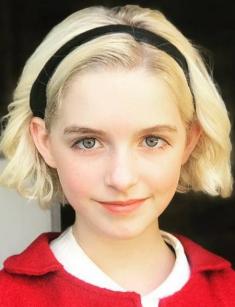 Movie and TV lovers are well familiar with Mckenna Grace. The young actress can boast an extended filmography: she has been working on various projects since six. Grace debuted in children’s movies and successfully found her place in more significant projects, such as Independence Day: Resurgence and Mr. Church. When Mckenna gained the lead part in the movie Gifted, people call Grace the little actress of big roles.

Mckenna Grace was born on June 25, 2006, in Grapevine, Texas. The girl’s parents had nothing to do with cinematography. Nothing promised that Mckenna would follow this path. However, the providence interfered: the grandmother gave Mckenna a collection of Shirley Temple’s movies for her fifth birthday.

Mesmerized, the girl spent several days in front of a screen and then said she wanted to do the same. The child started playing in her own theater; the family’s dogs and dolls used to behold those performances. As long as the parents saw that, they took Mckenna to a children’s acting studio. Soon, astonished teachers told the parents their daughter was “doing things you just can't teach”.

Following the teacher’s recommendations, the family went to an acting agency; the next week, Grace appeared in her first commercial for YMCA. Soon, the girl received the debuting role in a series. Mckenna and her mother moved to Los Angeles; the rest of the family did the same in a while.

The cute child debuted in the teen series Crash & Bernstein on Disney channel. The main character of the sitcom, twelve-years-old Wyatt Bernstein, has three sisters. He wants to have a brother and creates a talking puppet doll, Crash. Since that moment, life turns into a chain of merry adventures. Grace got the role of Wyatt’s younger sister, Jasmine. The audience enjoyed her acting for two seasons.

As the girl was working on Crash & Bernstein, she also appeared in several TV projects (The Goodwin Games and Instant Mom) and debuted in the full-length movies (Denis Hennelly’s postapocalyptic drama Goodbye World and the comedy thriller Suburban Gothic).

In 2013-2015, the actress strengthened her positions and played in the long series The Young and the Restless that has been aired since 1973. Her character, Faith Newman, participated in 50 episodes. In 2014, Mckenna worked on an episode of the iconic series CSI: Crime Scene Investigation.

Little Grace worked hard. In 2015, she appeared in 13 projects including the popular series The Vampire Diaries with Nina Dobrev and Paul Wesley; Mckenna personified young Caroline Forbes in two episodes. Besides, the artist participated in her first horror, Frankenstein by Bernard Rose, and represented Molly. The main character, Adam, who has been created by Victor Frankenstein and his wife, tries to make friends with her.

In 2015-2017, young Grace joined the cast of the series Once Upon a Time that had been successfully aired for seven seasons on ABC channel. The story is set in the fairy-tale and real worlds. Mckenna played young Emma Swan who saved Prince Charming and Snow White. The actress managed to create the magnificent atmosphere of the popular tales.

By ten, Mckenna was so famous that directors invited her to both children’s and adult projects. In 2016, the girl appeared in the touching drama Mr. Church by Bruce Beresford. She had the opportunity to collaborate with legendary Eddie Murphy.

The same year, Mckenna earned international popularity: she worked with Roland Emmerich and appeared in his Independence Day: Resurgence, the sequel of the iconic fantastic action movie. The blockbuster grossed about $400 million; the actors had many financial benefits as well as people’s recognition all over the globe.

With all that being said, it was the drama Gifted that made Mckenna Grace genuinely famous. It was her first lead part in the adult movie, and the talented girl performed with dignity. Her character, the gifted teenager Mary Adler, lives with her uncle Frank (Chris Evans). When his mother and Mary’s grandmother discovers that the girl is a math genius, the teen’s life changes for the worse.

Critics appreciated the movie; Chris Evans and Mckenna Grace were nominated for Critics' Choice Movie Awards and Teen Choice Awards correspondingly. The same year was marked with other works: the lead roles in the horror Amityville: The Awakening and the biopic I, Tonya. The latter tells the story about the famous American figure skater Tonya Harding; a part of the story is set in the past, and Mckenna personified Tonya in her childhood.

Few young actors can boast a role of a president’s child. Grace can do that: she played Penny Kirkman, the leader’s daughter, in the political drama series Designated Survivor. Kiefer Sutherland personified the US President and the girl’s father.

In 2018, Mckenna worked on little projects mostly. She appeared in an episode of the series Chilling Adventures of Sabrina starring Kiernan Shipka. The actresses bear much resemblance to each other, and many TV viewers marked that; some of them even thought that Mckenna was Shipka’s sister due to the fact they look alike. Besides, Grace began to play in The Haunting of Hill House.

The same year, the artist gained her first villain role in the thriller The Bad Seed. She played Emma, the middle-school teenager who goes through the untimely death of her mother. The father (Rob Lowe) tries to comfort his daughter but notices soon that she is somehow involved in all the mysterious deaths that happened in her school. First of all, a student who won a medal got drowned; Emma used to dream of that victory. Later on, a teacher and a former nanny die. Terrified, the man understands: his child is a cold-blooded murderer.

Today, Mckenna Grace participates the sitcom Fuller House; she had started working on it in 2016. Another popular project, Young Sheldon, was premiered in 2018. It is the prequel of the iconic series The Bing Bang Theory that shows the childhood years the physicist Sheldon Cooper, one of the main characters in the original. Grace has the recurring role of Paige.

Just like any kid, the actress likes to read, travel, and play with her pets in her free time. Mckenna loves animals and fights for their rights; she is a vegetarian.

The young star has an Instagram page; fans can see how their favorite is changing day by day. Mckenna’s height is 4.76 ft. (145 cm.) now.