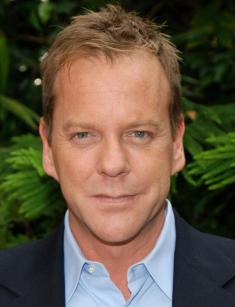 In the "treasure box" of the British-Canadian actor there are a prestigious Golden Globe award and an Emmy award. The son of famous parents, Kiefer Sutherland, managed not to be overshadowed by them and took his niche in the film industry.

In 2011, Kiefer got a star on the Hollywood Walk of Fame a week earlier than his father, Donald Sutherland. According to Forbes magazine, the actor got on the list of the most "expensive" actors, each year earning from $20 to $40 million.

His parents, Donald Sutherland and Shirley Jean Douglas in 1966 were working in Britain. The birth of twins, the son Kiefer, and the daughter Rachel in one of the hospitals of London provided the small Sutherlands with British citizenship, in addition to their Canadian one, and the right to live in England.

Kiefer Sutherland's blood is a mixture of Canadian and Scottish one. His maternal grandfather, Tommy Douglas was a native of the Scottish town of Falkirk. In Canada, everybody knows the name of Douglas: according to surveys, the former politician and Prime Minister of one of the provinces consistently ranks in the Top-10 outstanding countrymen. His parents decided to name their son Kiefer in honor of the director and writer Warren David Kiefer.

After the birth of the babies, the actors left Britain and moved to Los Angeles. However, when the children reached the age of four, the family started falling apart. And in five years, Shirley took the children and came back to Canada. The future Hollywood actor spent his childhood and youth in Toronto, Ontario. Kiefer changed seven private schools, eventually graduating from St. Clair Junior High (now Gordon A. Brown Middle School) East York.

Because of the moving from one province of Canada to another, Kiefer Sutherland learned to speak French fluently. The fact that he was born in the family of actors predetermined his future: at the age of nine, Kiefer Sutherland appeared on the theatrical stage for the first time in his life. He devoted his youth years to studying his future profession, attending Sunday acting classes. Kiefer went to conquer the "dream factory" when he was seventeen.

The cinematic biography of Kiefer Sutherland started with the role of Bill Costello in the comedy-drama Max Dugan Returns. The film is notable for the fact that the aspiring actor starred in it together with his dad, Donald Sutherland.

The successful debut opened the world of cinematography for the young man. In the following year, he was entrusted with a role in the motion picture The Bay Boy. In 1986, the actor appeared in four projects, the highest-rated of which was the drama film Stand by Me.

Kiefer Sutherland's career developed rapidly: in his fifth year of living in Los Angeles, Kiefer Sutherland was offered to play a vampire biker in the teenage hit film The Lost Boys. The movie grossed $32 million and won the Saturn Award for Best Horror Film of 1987. Later film critics wrote that the motion picture played a huge hand in the development of the goth subculture, and vampires became the idols of the younger generation for a long time.

In the same year, Sutherland Jr. got the leading part in the thriller film The Killing Time. His character, a no-name killer, was so convincing, that Kiefer was nominated for MTV Movie Awards for Best Villain.

But it was the American western film Young Guns, which came out in 1988 and its sequel, in 1990, that made this Canadian guy genuinely famous. Kiefer Sutherland starred in this action film together with Charlie Sheen, Emilio Estevez, and Lou Diamond Phillips. It was the first project where Sutherland was offered a part of a mature man: before the Young Guns, he played troubled teenagers.

The thriller film Flatliners directed by Joel Schumacher, which premiered in 1990, helped the actor to confirm his success. Kiefer Sutherland appeared on the screen together with Julia Roberts and Kevin Bacon, playing the central character, Nelson Wright.

In two years, the audience saw the prequel of the cult television series Twin Peaks, called Fire Walk with Me, where the Sutherland got the part of Agent Sam Stanley. Among the most successful works of the actor in the 1990s should be noted the projects The Three Musketeers (as Athos), neo-noir anthology television series Fallen Angels and the neo-noir science fiction film Dark City.

In the early 1990s, Kiefer Sutherland tried himself in directing. He made his debut with the thriller film Last Light, which was recognized a few years after its release. The aspiring director played the leading role in his own project. The filmography of Sutherland as a director was enriched with two more movies, of which the drama film Woman Wanted became high-rated. In the project, Kiefer gave the central part to himself.

Sutherland Junior started the 2000s with a triumph: in 2001, the long-running action drama television series 24 saw the light, in which Kiefer appeared as the main character, a member of the fictional Counter Terrorist Unit (CTU), Jack Bauer. The television series turned out to be so popular that the creators kept running it until 2016. Kiefer Sutherland starred in it until 2014. For his work in the thriller film, the star was awarded a Golden Globe, an Emmy and Screen Actors Guild Award.

In 2008, Kiefer Sutherland starred in supernatural horror film Mirrors directed by French director Alexandre Aja, a remake of the horror film Into the Mirror.

The movie Melancholia directed by the cult filmmaker Lars von Trier. The drama premiered in Cannes in May 2011. Besides Sutherland, Kirsten Dunst and Charlotte Gainsbourg starred in the movie. Melancholia brought Lars von Trier The Palme d'Or (English: Golden Palm) and to all the actors - a new wave of popularity.

An ambiguous reaction of viewers and critics accompanied the release of the American drama television series Touch (the show was closed after two seasons) and the romantic historical disaster film Pompeii. Kiefer got a mock booby prize The Golden Raspberry Awards for his work in this movie.

In 2013, the viewers saw the western drama film Forsaken, starring both Sutherlands, the father, and son. The premiere of the film took place in Toronto in the fall of 2015. The drama film appeared in the world box office in the winter of 2016.

Charismatic Kiefer Sutherland has always enjoyed the attention of the ladies, even though one wouldn't call him a tall, handsome man (Kiefer Sutherland's height is 5 feet 74 inches). However, Sutherland can still only dream of everlasting family happiness and cozy home, where his wife and children would always be there for him. One of the reasons for the problems in his love life seems to be heavy drinking.

In the late 1980s, Kiefer got married to the widow of the guitarist Terry Kath, Camelia. In 1988, the couple had a daughter Sarah Jude, but two years later the marriage fell apart.

During the filming of Flatliners in 1992, Kiefer Sutherland met actress Julia Roberts. Their passionate affair almost led to marriage: the couple announced their engagement. Julia and Kiefer publicly talked about their feelings and shared plans to invite 600 guests to their wedding. However, a few days before the wedding, Roberts caught her lover in bed with the dancer Amanda Rice.

The second official marriage of Kiefer Sutherland was registered in 1996. It was Elizabeth Kelly Winn who went down the aisle with the careless man. But the couple managed to stay together for only a year and filed for divorce in 2008.

In late 2008, Sutherland Junior was arrested for drunk-driving. It wasn't the first time for the star actor to drive after having "a couple" of drinks. This time he was sentenced to 48 days in prison. The Hollywood actor spent his Birthday and Christmas behind bars.

Sutherland does not give up the dream to find his soul mate. He hopes that his third marriage will be happy and he will have a healthy family. The rumor has it that Kiefer is going out with former model and the editor of a glossy fashion magazine Siobhan Bonnouvrier.

Kiefer Sutherland is a fan of the cult band Queen. He collected an impressive collection (fifty) of vintage guitars. Also, the star loves the Rodeo, for which he purchased a ranch in the state of Montana.

Kiefer Sutherland has a net worth of $75 million. In 2016, the ABC channel released the political thriller drama television series Designated Survivor, in which Kiefer appeared in the leading role of President Thomas Kirkman. In the spring of 2017, ABC channel announced its decision to shoot the second season of the project.

The science fiction psychological horror drama film Flatliners, a remake of the 1990 film of the same name, was released in 2017. The shooting of the movie lasted from July to September 2016 in Sutherland's hometown, Toronto.