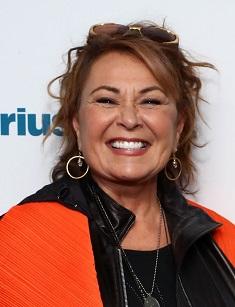 Roseanne Barr is an American comedian and TV producer, both famous for a super-successful sitcom Roseanne, which is available on Netflix, and notorious for several controversial things. One might say that Barr’s way to fame isn’t right, but everyone has a choice in the beginning. Let’s discover the details of her career path and take a look at the most remarkable facts.

Roseanne Barr was born on the 3rd of November, 1952, in Salt Lake City, the capital of Utah, U.S. She had three younger siblings.

Her ancestors were Jewish immigrants from Russia and Austria-Hungary. Initially, paternal grandfather’s name was Borisofsky, but he changed it to a more fitting one — Barr.

While growing up in a Mormon Utah, Roseanne was a strict Orthodox Jewish due to her maternal grandmother’s rules. However, the whole family officially referred to The Church of Jesus Christ of Latter-day Saints, which had a headquarter in Salt Lake City. The start of Roseanne’s career is also connected with the Church - at the age of 6, she began giving lectures around the state and was assigned as a head of a Mormon youth union.

Several incidents occurred during Barr’s childhood. Firstly, in 1955 Bell’s palsy was discovered. The Barrs tried calling a rabbi to pray for her, but it didn’t work. Then they asked a Mormon preacher to come, and the time of his arrival coincided with a remission, so they paralleled it and considered a wonderful cure.

When Roseanne was 18, which wasn’t even the legal age, she flew the coop without any decent notice and just told her parents that she was going on a vacation to her friend in Colorado.

Barr started with her own little stand-up shows in Colorado. Later on, she moved to the West and tried doing her best in The Comedy Store, a club in Los Angeles where a lot of young comedians originated and performed. In 1985 she appeared on The Tonight Show, which has been on air since 1954 and still is very popular. To sum up, it was quite a long start since more than 15 years passed before Barr achieved something significant.

However, it was clear sailing from those times, and the next year Roseanne made an appearance on another late-night talk show Late Night with David Letterman and featured a Rodney Dangerfield special episode. In 1987, HBO signed her as a host to The Roseanne Barr Show, her first independent work, which was supposed to be a draft for the following Roseanne (sitcom). Roseanne was accoladed with an American Comedy Award as the best female comedian on TV.

From back on, Barr started to be selective and refused to portray Peg Bundy, a lazy wife from the Fox TV series Married... with Children. She wanted to play complex or just more relatable characters and fulfilled her wish in 1988 with a film debut in She-Devil. A newly introduced actress received a very warm response that approved her actions. With Barr’s popularity, she could join any plain, dumb entertaining project, but she decided to join a black comedy featuring Meryl Streep and demonstrate her other side of acting talent.

During her maturation, Barr witnessed different positions of wives (and also housewives) and the public’s attitude towards their deeds. She started idealizing and popularising a concept of a «domestic goddess», a woman capable of both working and looking after her family.

In 1987, the executive producers of The Cosby Show, a highly rated sitcom on NBC, decided to put on air an idealistic comedy about middle-class workers. Barr was asked to play Roseanne Conner, the heart and the lead of the family, and the screenplay was appointed to Matt Williams, who had also worked on The Cosby Show.

The ABC show was entitled simply — Roseanne, and was based on Barr’s life. At once the sitcom turned to be an enormous success since 21.4 million households saw the premier.

However, there was an accident with the credits. It is usually believed that the screenwriter is also a creator, but in this case, Barr gave the idea and its specific interpretation. She was genuinely angered after discovering that Williams was listed as a principal author and demanded his dismissal. Roseanne started a kind of rebel refusing to obey Williams’ guidance and even implied her withdrawal from the show unless the so-called creator was fired.

The audience was enjoying Roseanne for nine seasons, and its star won several awards including an Emmy, a Golden Globe and American Comedy Awards. By the end of the air, Barr was the second-highest-paid woman on TV with $40 million, yielding only to Oprah Winfrey.

In 1994 Barr was chosen to host the MTV Video Music Awards which made her the first female to do so.

Until 2005 she worked on the other projects besides comedy, such as giving voice to animated characters, releasing two books, making Saturday Night Live guest appearances, hosting a cooking show. Barr went on with live stand-up shows, touring the world and Europe in particular. She also returned on HBO and hosted some radio programs, including a politically themed one.

Barr’s career was full of projects; some of them were canceled no more than a week after the release, some of them didn’t actually come to light. But the one that made her famous — Roseanne — had a chance for revival. In April 2017 new details appeared that Barr and her crew were shooting new episodes of the show and trying to sell them to any channel. Eventually, ABC picked it up, and the show featured another season with pretty high ratings. All in a sudden the 11th season was shot down.

The channel canceled Roseanne due to Barr’s racist tweet on Valerie Jarrett which was later deleted. Of course, not everyone agreed with such decision and the actress was backed up with a comment from Jimmy Kimmel, a TV host, and a supporting post from her co-star in Roseanne, John Goodman. A similar accident took place featuring Samantha Bee, also a TV star, and her rudeness towards President Trump’s daughter, but it ended up differently — she wasn’t fired.

Roseanne has $80 million net worth.

One might consider Barr’s personal life a little scandalous.

Roseanne had a child when she was 17 and labored it during her stay at a hospital, where she was getting treatment after a severe brain injury. She was kept there for no less than eight months. Although back then she put her baby up for adoption, mother and daughter reunited later.

Barr’s first spouse was a simple worker, Bill Pentland, with whom she spent 16 years and had three children.

Moreover, Barr tended to mix up her work and personal life. Her second husband, Tom Arnold, also a comedian, was taking part in creating Roseanne (by the way, the couple couldn’t have kids and got a divorce in 1994). Her sister Geraldine, an open lesbian, assisted Roseanne in the real beginning, managing club performances, arranging meetings, etc. Afterward, Geraldine sought after getting a tremendous amount of money due to the so-called agreement they had with her sister but eventually lost.

In 1995 she married Ben Thomas, a security guard she met once, and they had a son, Buck Thomas, delivered thanks to IVF.

Barr underwent numerous surgical procedures, all aimed at reducing the consequences of her obesity. She also made unproved statements about her health on Twitter, and quite a lot of data on her body can now be found on social media. It also might explain why there are no nude photos on the Internet.

There were some controversial situations with Barr involved. Every accident has always been followed by somewhat farfetched excuses. For instance, she became gaining notoriety with a bad singing of the National Anthem and explained her screechy sounds with an attempt of singing as loudly as possible. Roseanne also featured a Hitler photoshoot, that implied such black and radical humor, so no one considered it funny.

Barr tried herself on the 2012 United States presidential election firstly on behalf of the Green Party and then on the Peace and Freedom Party ticket. She wasn’t really bothered by the change of political parties.

The comedian didn’t make any significant achievements in politics but asked to draw attention to economics and personal health. Barr ended up supporting Barack Obama. However, during her campaign, Roseanne faced many disagreements and misunderstanding from the colleagues.

In 2016 she was referred to as a Trump supporter, while she only stated that she didn’t want Hillary Clinton to be her president.

Barr released an album I Enjoy Being A Girl (1990) on a record label Hollywood Records. Another CD titled by her name was an audiobook Roseannearchy: Dispatches from the Nut Farm which came out in 2011.