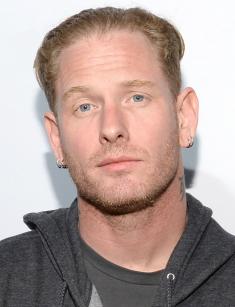 Corey Taylor is the lead singer of the cult band Slipknot. Now it is difficult to imagine the work of this team without his voice but few people know that the history of the team could be different. The fact is that Taylor had to go through a lot of difficulties, overcome alcohol addiction and even be one step away from death. Fortunately, the musician coped with the tests and continues to perform and record new songs.

The future rock idol was born in the town Des Moines, Iowa, on December 8, 1973. The boy's parents did not live together and Corey spent with his mother and grandmother most of the time. Later, the musician admitted in an interview that "a part of Slipknot" was in his soul when he was a child: at the age of 6, Taylor watched the series Buck Rogers in the 25th Century, which impressed the boy with special effects.

The craving for reincarnation and love for scary masks also came from childhood: Taylor's favorite holiday was Halloween with his costumes and fascinating horror stories. Then Corey was interested in music. His grandmother had a collection of albums of Elvis Presley. As a teenager, Taylor chose shitty music. He was a fan of Black Sabbath.

Unfortunately, Corey's childhood was filled not only with happy moments. At the age of 10, the boy was addicted to cigarettes and alcohol and he tried drugs for the first time two years later. The addictions were not unnoticed: Taylor was in a hospital bed twice because of an overdose of cocaine and then he could not get rid of alcohol dependence for a long time.

The situation was saved by the grandmother of the young man, who achieved official custody of her grandson, helped him to return to school and normal life and she even insisted on music lessons. At the age of 18, Taylor left home and began an independent life.

At the new place, Taylor met with musicians Shawn Economaki, Joel Ekman, Jim Root. Young people created their group Stone Sour and even recorded two albums. However, their popularity was not achieved. And in 1997, Corey received an invitation, which was a turning point in his biography: the musician was invited to join the young team Slipknot. Taylor agreed and left the band Stone Sour.

Corey Taylor should support the new team only during the tour but eventually was the vocalist of Slipknot. In addition to him, the group at that time included Shawn Crahan, Mick Thomson and Joey Jordison. Later, the team was joined by several musicians.

It`s hard to believe now but the first performance of Corey in "Slipknot" was, according to the rest of the team, unsuccessful. It is noteworthy that Taylor performed without a mask. And the second concert as a part of the team was much better: the musician "joined" the team and his voice suited the entire repertoire of the rock band.

Then all members of the group had the same mask, which covered the face of the singer with similar attributes. The style of the performers looked quite intimidating but it was soon the visiting card of Slipknot.

In the summer of 1999, the band released a debut album. According to the musicians, no one expected such success: the album took the first place of all kinds of charts for a couple of weeks and was twice platinum in the number of sales in the United States. Two years later, the group released the next album "Iowa," which gained the same popularity.

The next album of Slipknot or rather its long absence made fans of the group pretty nervous: there were rumors about the collapse of the group. However, in 2004, the team presented the long-awaited album, remembered by music lovers with songs "Before I Forget," "Vermilion," "Duality." Traditionally the release of the album launched a tour of the United States and other countries.

The album "All Hope Is Gone" continued the discography of Corey Taylor and the band Slipknot, which caused a lot of controversies. According to some music lovers, this disc, which was released in 2008, was a failure. Others called the album the best in the work of the group. Anyway, but the songs "Snuff", "Psychosocial", "Sulfur" are still popular.

During his musical career, Corey Taylor also managed to participate in other projects: the vocalist has joint tracks with the teams "Apocalyptica", "Damageplan", "Steel Panther" and others. Besides, Corey performed many solo songs and returned to participate in the project Stone Sour, with whom he recorded many joint albums.

The first serious affair of Corey Taylor was a relationship with Scarlett Stone. In 2002, the girl gave birth to a son Griffin Parker. It is also known that Corey already had a daughter, who was born in 1992. In 2004, Taylor proposed to Scarlett and the couple got married. This relationship lasted three years after the wedding, after which the young people finally broke up. The second wife of the singer was a girl Stephanie Luby.

The musician prefers not to advertise the details of the personal life and relationship but he does not hide the difficulties he had to go. Corey shared with fans some details of his childhood, as well as alcohol addiction in his autobiographical book Sickness. He even talked about the suicide attempt, which he was pushed by despair and the impact of alcohol.

The musician released 2 other books, in which he told about his way to success and what is happening behind the rock scene.

Now Corey Taylor together with the band Slipknot works on recording of the next album. Corey Taylor has a net worth of $10 million.

The singer said in an interview that the album would be released in 2019 and the team presented the single "All Out Life" in the fall of 2018, which will be included in the new album. A video for this song was shot at the same time, which gained a huge number of views on social networks.

Fans can follow Instagram of Corey Taylor, while waiting for the album. He shares personal photos and some details of concerts and tour life on "Instagram".

As a part of «Stone Sour»

As a part of "Slipknot»