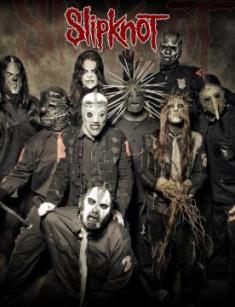 Slipknot is an American nu-metal group whose albums often became platinum in the United States and abroad. Even those who did not speak English sang their hits: “Duality”, “Wait and Bleed”, “Psychosocial”, and “Snuff”. Although the peak of the band’s popularity has passed, the American musicians might top charts again in the future.

Everything began in 1992 when two friends, Shawn Crahan and Anders Colsefni, were talking about their music tastes and decided to organize a group together. The young people believed that lots of percussions made music important. Shawn was a splendid drummer, and Anders became the vocalist and percussionist.

Soon, the bass guitar player, Paul Gray, was found among friends. The “preliminary” group was named Heads On The Wall. The artists even had several rehearsals, but Crahan had some problems and had to postpone music practices.

In 1995, the friends came back to their dreams about fame and fans and revived the group. Several new members joined them: the drummer Joey Jordison, the solo-guitarist Donnie Steele, and the rhythm-guitarist Kun Nong. The latter two left the group the next year, and Craig Jones and Josh Brainard replaced them. After Mick Thomson joined the band, the musicians began to work on the debuting album.

This is when the present-day name, Slipknot, appeared. Besides, the musicians developed their unique visual style: performing in frightening masks. Anders Colsefni used to cover his face with tapes. The next year, Corey Taylor conquered the artists’ hearts with his pure vocal and joined the group. Besides, Chris Fehn and DJ Sid Wilson, who was wearing a respirator rather than an ordinary mask, became the members of Slipknot.

The debuting album Mate. Feed. Kill. Repeat was released in 1996. Following their image, the group presented it on October 31, on Halloween. The first edition was only a thousand disks, and not all of them were sold: the musicians distributed most of them among friends. It was evident: going to the stage was difficult without a sensible producer.

Ross Robinson became such a person: he realized the young artists were promising after the first audition. The next year, in 1998, Slipknot (with the new guitarist James Root) signed the cherished contract with a studio.

1999 brought the second album, Slipknot, that actually introduced the band to the audience. The producer’s hard work was rewarded, and many copies were sold within a short time.

The group immediately started giving concerts. By that time, they had revised their image: the masks became more horrible and high-quality; the team was also wearing jumpsuits of the same color and different shapes. It looked impressive, and the good music added the effect of a professional show. There is no wonder that the number of Slipknot’s fans was increasing rapidly after each show.

The early 2000s were ambiguous: it was the time of triumph and new conflicts. As the band earned much fame, it was necessary to give many concerts, record new albums, and keep rehearsing. The musicians were not ready for this stress and began to quarrel because of tiredness. Fortunately, Slipknot passed the first severe test without losses and presented the album Iowa notable for the hits “The Heretic Anthem”, “Left Behind”, and “My Plague”. The latter song became the soundtrack for Paul W.S. Anderson’s Resident Evil starring Milla Jovovich, Michelle Rodriguez, and Eric Mabius.

The rockers went to a new tour and then disappeared from the media for a while; rumors had it the band split up. Corey Taylor mentioned in his interview he hated the day he met other members, and these words added fuel to the fire.

In fact, the musicians had a time-out to have rest from each other and devote some time to their own projects. In 2004, fans welcomed the new album that proved the vacation was only useful for Slipknot: the songs “Vermilion”, “Duality”, and “Before I Forget” turned into metal classics. The latter hit brought the artists the Grammy Awards.

The next album, All Hope Is Gone, came out in 2008 and immediately topped music charts and sales. The traditional supporting tour lasted for a year and became the longest tour in the group’s history.

In spring 2010, everybody was shocked by the news about the bassist Paul Gray’s death; the man died of an overdose. In 2013, the number of the band members decreased again.

The drummer Joey Jordison left the group; the reasons were kept secret for a long time. Finally, it was revealed that a severe disease, transverse myelitis, made the musician quit.

Despite these dark events, Slipknot continued to collect the materials for the new disc. .5: The Gray Chapter was presented in 2014; it was recorded with new members, the bassist Alessandro Venturella and the drummer Jay Weinberg. The music video “The Negative One” was premiered and received a nomination for the Grammy Awards.

The traditional post-album tour finished the announcement about a new artistic vacation until 2017.

The promise about a new album was not kept in time: the release was rescheduled several times. According to the group’s vocalist, the new songs would be dark and autobiographic.

The premiere of the new disc, We Are Not Your Kind, took place on August 9, 2019. Fans can learn the latest news about Slipknot on Instagram and other social networks.