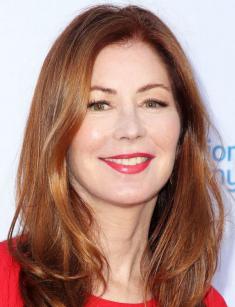 Dana Delaney is an American actress, famous for her roles in the TV series Desperate Housewives and Body of Proof, producer, and activist. The charming woman was twice included in the100 Most Beautiful list according to People magazine and had a lot of fans. Having preferred career to personal happiness, the actress remained faithful to the profession and continues to delight the audience with new roles in movies and tv shows.

Dana Welles Delany was born on March 13, 1956, in New York, to a family of Irish-English Catholics. Her mother's name is Mary, and her father is Jack Delany. She also has a sister, Corey, and a brother, Sean. Since childhood, visiting numerous Broadway shows, the baby dreamed of making an acting career.

Dana enrolled in a private school in the town of Andover, where her classmates were jazz composer Bill Cunliffe, artist Julian Hatton, and sculptor Gar Waterman. Delany considered studying with interesting, creative people the best time in her life. In 1974, she wrote an article with memories of the most exciting moments of her early years, where she mentioned her friends with warmth and love.

Dana of natural beauty and charm attracted the attention of the heads of the school theater club and soon appeared on the stage in a play called South Pacific. The image of a hesitant and indecisive heroine was difficult at first, but the woman showed perseverance and creativity and eventually brilliantly played the proposed role.

In 1978, Delaney graduated from Wesleyan University with a major in theater and made her debut in the student project directed by Jonathan Meath.

After graduating as a theater actress, Dana settled in New York and for a while starred in episodes of soap operas Love of Life and As the World Turns, as well as acted in commercials such as for Wisk laundry detergent.

In 1983, she played in Nicholas Kazan's off-Broadway Blood Moon and after flattering reviews of journalists published in The New York Times, she moved to Hollywood and worked for several years in the TV shows Moonlighting, Magnum, Thirtysomething, and others.

But Dana's the real acting career began after she received the lead role of nurse Colleen McMurphy in the series China Beach aired weekly on ABC. The media started talking about Delany who received 2 Primetime Emmy Awards and several nominations for the Golden Globe Award. People magazine included Dana in the 50 Most Beautiful list and made her popular and famous.

After China Beach, the actress worked a lot in theater, cinema and television, receiving leading roles in such movies as A Promise to Keep, Light Sleeper, HouseSitter and Fly Away Home. In addition to filming, Delany began teaching at the Phillips Academy and passed on to students the experience gained during the electives on acting and dramatic speech techniques.

In 1998, Dana turned down the role of Carrie Bradshaw in the hit TV show Sex and the City. And the role went to Sarah Jessica Parker. She explained her decision with the negative audience reaction she received with a similar so-called women's film, Exit to Eden, at the beginning of her career. In the early 2000s, the actress became interested in voicing cartoon characters. Her voice sounded in the series based on the DC comics such as Superman: The Last Son of Krypton, The Batman/Superman Movie, and Justice League.

Back at the theater, Delany portrayed a pretentious heroine in Donald Margulies's play Dinner With Friends and was praised by critics, and then embodied the image of Beatrice in Shakespeare's comedy Much Ado About Nothing and pleased the audience with verbal sparring with stage partner Billy Campbell.

From 2004 to 2006, Dana appeared as a guest star in episodes of the criminal series Law & Order: Special Victims Unit, Kojak, Castle, as well as the fantastic show Battlestar Galactica. Besides, the actress participated in A Beautiful Life, Camp Hell and Multiple Sarcasms.

At the same time, the producers of the project Desperate Housewives wanted to get Delany in the role of Bree Van De Kamp, but the actress declined the offer, saying that the heroine was too similar to the women she had already played. However, three years after the series was launched and got recognition, Dana agreed to play a major role in the 4th season and earned rave reviews from critics for depicting the conflict and emotionally frigid housewife named Katherine Mayfair.

In 2010, Delany left the show for the ABC project called Body of Proof. Dana played a former neurosurgeon who turned into a medical examiner after a car accident caused her to lose finger sensitivity.

Fragile and ironic Dr. Megan Hunt, treading colleagues and partners, played by Nicholas Bishop and Mark Valley, perfectly suited the actress in character. Friends and acquaintances said that sometimes they could not separate the screen image from the real person.

In April 2011, Delany came 9th in People magazine's annual 100 Most Beautiful list and became the host of the fourth annual Television Academy Honors.

Beautiful Dana Delany is the owner of a chic hairstyle, a stunning smile and almost perfect figure with the height of 5'6'' (168 cm), weight 136 lbs (62 kg), and measurements 94 – 66 – 89 cm. The images of women, periodically appearing on the covers of magazines in evening dresses and bikini, turned the head of many men.

The young actress caught the interest of arising comedian Steve Martin, and after the joint work in HouseSitter, their relationship turned into a long and passionate affair, which most likely would end in a wedding. But Dana, who valued personal freedom and independence, left her admirer without regret and plunged into her work.

In 1996, a new man appeared in the life of the actress. It was film director Bob Saget, who introduced Dana to his parents but did not bind the beloved with any obligations, leaving behind the right to dispose of her own life. They broke up when Delany had got a role in the series Body of Proof and had no time for romance.

Besides, there were rumors about the affair of the actress with James Belushi, but they were not confirmed, and the truth remained a mystery.

During the filming of the series Body of Proof, Dana became interested in young partners and some time dated Jamie Bamber and Mark Valley. And before that, the actress had stormy, but a short relationship with the actor of Broadway theater, Billy Campbell.

As a rule, Delany does not like to demonstrate personal life. She did not become an active user of Instagram, and on her Twitter page, she mainly shares not the pictures but the impressions of the books read and the movies seen, as well as reflections on social and political topics.

When the actress turned 50, she said in an interview that now she was ready to get married and have children, but Dana didn't have the man she would call husband.

Currently, the actress leads an active social life, dealing with the problems of finding a cure for scleroderma and supports the program Planned Parenthood. She is not married.

Dana participates in activities sponsored by the Gay and Lesbian Alliance Against Defamation.

Delany continues to appear on television, and in 2019 the audience can see her in the series The Code and The American Guest.

At present, Dana's net worth is estimated at $10 million.