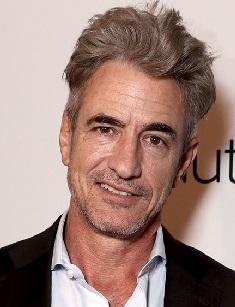 Dermot Mulroney is an American actor who has been working in this field since the 1980s. He is mostly known for his roles in TV shows, for instance, Friends (2003), Shameless (2015–2017), American Horror Story: Cult (2017), films like Young Guns (1988), My Best Friend's Wedding (1997), Where the Money Is (2000) and other movies of various genres such as romantic comedy, western, and drama. Mulroney has also won four awards for his work.

Dermot was born in 1963 in Virginia, U. S. His father was Michael Mulroney, a professor at Villanova University School of Law and his mother, Ellen, was a theater actress. Mulroney’s had a lot of kids, so Dermot has four siblings: two older brothers, Sean and Conor, a younger brother, Kieran who is also an actor and a younger sister, Moira.

During his education, Dermot has changed schools. He went to the Matthew Maury Elementary School, where he attended the children’s theater and started playing cello firstly in school and then in city orchestras. His next schools were George Washington High School and T. C. Williams High School, from which he graduated in 1981. The next step of education Mulroney got at the Northwestern University in Evanston, where his primary subject was communications. What’s interesting is that even in college Dermont still did not realize that he wanted to become an actor, he was more interested in learning behind-the-camera skills.

Since childhood, Dermot has a lip scar that is rather noticeable in his career. He got it from an accident when he fell on the broken dish.

When Dermot was in college, he went on the audition where was Barbara Gale, the agent of William Morris Agency, who offered the young actor a contract with the condition that he would move to Hollywood. There he went on another audition and got the lead role in Sin of Innocence (1986), which was his debut film. Then, he has been playing some challenging parts in drama movies a lot. For instance, he was a boy who fell in love with his stepsister (his debut role, as we said before), a man who died because of AIDS (Longtime Companion, 1989; it was the first widely-released movie on this subject), a guy who has been raising his child with autism (Family Pictures, 1993), etc.

In 1989, Mulroney starred in Survival Quest, where he met Catherine Keener, who would be his wife in one year. They also appeared together in other films such as Heroine of Hell (1996) and Lovely & Amazing (2001).

In 2003, Mulroney played the role of Gavin Mitchell, the boyfriend of one of the main characters, Rachel Green, on the famous TV series Friends. That was Dermot's last appearance on television for a couple of years. In one of his interviews, the actor said that he wanted to put films in priority. Mulroney’s next television project was The Memory Keeper's Daughter in 2007, where he played the role of Dr. David Henry.

Mulroney has been nominated for ten awards and has won four of them:

Mulroney has a net worth of $11 million which he earns from his great acting career. Besides that, sometimes he reads stories on the WBEZ Chicago Public Radio, and he is a musician who plays violoncello and writes songs by himself. Dermot is an experienced cellist who has been performing since childhood. He used to be a part of the band named the Low and Sweet Orchestra who even released an album “Goodbye to All That” in 1996. In 2005, Mulroney performed together with another musician, Boyd Tinsley, at the Alanis Morissette's show at the House of Blues in Los Angeles.

In 1986, Mulroney met Catherine Keener, his first wife, who has been starring in the film Survival Quest with him. They got married in 1990, and in 1999 Clyde Keener Mulroney, their son, was born. Currently, he is a singer. Dermot and Catherine split in 2005 and got an official divorce in 2007 which was filed by Mulroney’s initiative. The reason for their break-up remains unknown; the thing was about their “irreconcilable differences." In 2008, he married an Italian cinematography agent, Tharita Catulle. The pair has two children together: their first daughter, Mabel Ray, was born in 2008, and in 2009 they had one more kid, Sally June.

By the way, Mulroney was included in the list of People's Sexiest Men of the Year publication in 2005 as its "Sexiest Jack of Arts." And that's not surprising at all; no matter if we look at the young Dermot or him at his age now, he is still very good-looking! If you don't believe us, go check his shirtless photographs, or maybe you will be able to find him naked.

At present, Dermot has a net worth of of $11 million.