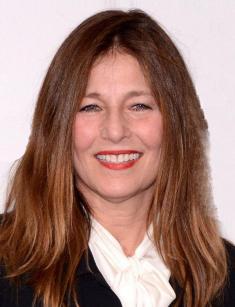 Catherine Keener managed to take part in dozens of film projects for her creative career and received an Oscar nomination twice. The woman continues to radiate optimism and excellent energy and she has her creative plans for the next couple of years.

The biography of the future actress Catherine Ann Keener began on March 23, 1959, in a hot city near the Atlantic Ocean Miami, Florida, USA. The girl grew up in a large family. She has four brothers and sisters, one of whom is Elizabeth, who also found herself in an acting career and worked as a real estate agent in Los Angeles. Catherine's father, Jim, was a simple manager in a mattress store and Evelyn's mother raised children.

The actress has Irish roots on her father's side and Lebanese on her mother`s. The family Keener moved to the city Hialeah because of work, where Catherine spent her youth and received her secondary education in Monsignor Edward Pace High School. In 1983, she moved to her aunt's home in Norton, Massachusetts, where she Monsignor Edward Pace High School.

In her youth, Keener enrolled in theater courses after she failed to take place in the classroom for photography. Perhaps this minor event in the student life of Catherine influenced her further successful acting career. Her first theatrical production was the Wendy Wasserstein play Uncommon Women and Others.

After graduation, Keener moved to New York, where she found work as an assistant in a local acting agency. Later, she decided to move to Los Angeles, where she was able to take her first steps in the direction of an artistic career.

Catherine Keener performed her first episodic role in 1986. She played a young waitress with a single line in the romantic comedy About Last Night... directed by Édward Zwick. The main characters were played by Hollywood actors Rob Lowe, Demi Moore, Jim Belushi.

After five years, she took part in a musical melodrama called Johnny Suede. The film was the debut of the director Tom DiCillo. The main role of the hipster musician named Johnny was played by the unknown actor Brad Pitt at the time. Since 1991, he and Keener have friendly relations.

Another important project film in the filmography of the actress was another movie Living in Oblivion of Tom DiCillo in 1995. Her husband Dermot Mulroney and the famous American actor Steve Buscemi starred in the comedy-drama together with Catherine. Keener turned into Nicole, the actress, who agreed to play in the movie of a loser-producer just because she felt feelings for him secretly.

A year later, Catherine was once again nominated for an Independent Spirit Award for her performance in Walking and Talking of the talented independent director Nicole Holofcener. Critics noted her ability to look harmonious on the screen. She starred in 3 movies of this director in the melodrama Friends with Money together with her friend and Hollywood beautiful Jennifer Aniston and such comedies as Please Give and Charming and attractive.

In the following years, Keener expanded her creative career with a variety of projects, starting from the action-thriller 8mm directed by Joel Schumacher's and the crime drama Out of Sight of Steven Soderbergh's and ending with the romantic comedy The Real Blonde and Box of Moonlight. In 1997, the actress was invited to act as a jury at the Sundance Film Festival.

1999 brought to Catherine one of the most important roles - Maxine Lund in the absurdist dramatic comedy Being John Malkovich directed by Spike Jonze and the screenwriter Charlie Kaufman. Keener earned for her talented play her first Oscar and Golden Globe nominations for Best Supporting Actress.

In 2005, Keener appeared in several film projects such as the drama Arthouse The Ballad of Jack and Rose, the crime thriller The Interpreter, the comedy melodrama The 40-Year-Old Virgin and the biographical drama Capote, which was met with admiration by critics and viewers.

The actress turned into a famous American writer Harper Lee, who wrote To Kill a Mockingbird in the movie Capote. The woman received Oscar and BAFTA nominations as Best Supporting Actress for this role.

After two years, Catherine was invited to play in another important project, she tried on the role of Jan in the dramatic road movie Into the Wild, based on the novel of the same name by Jon Krakauer. The actress appeared in the drama New York, New York, the comedy Once Upon a Time in Hollywood, a musical biographical film The Soloist and others.

Bright movies of the 2010s, where Keener starred were the movies Trust about the cybercrime directed by David Schwimmer, a musical melodrama Begin Again with Keira Knightley, Mark Ruffalo in the main roles, Elephant Song with Canadian Xavier Dolan-Tadros and Get Out, which won the Oscar for Best Original Screenplay.

Catherine met with her husband, producer and director Dermot Mulroney on the set of the adventure thriller Survival Quest in 1988. On November 17, 1990, the couple got married. They had a long-awaited son, whose parents gave the name Clyde Survival Quest. By 2007, the relationship between the spouses led to divorce.

The woman does not have a personal microblog on "Instagram" but her fans cope with it on their own, they created several pages, where they post photos from the professional and personal life of the actress, rare images of Catherine in a swimsuit or underwear, as well as all the latest news about the activities of the star.

Now the actress continues shooting in the series Kidding with Jim Carrey in the main role. Catherine Keener has a net worth of $8 million.

Also, in 2019, the premiere of the thriller Deadfall, comedy Captain Marvel and melodrama Modern Love with Keener will be held.