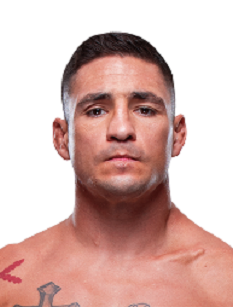 Born and raised in New Mexico, Diego Sanchez became a mixed style fighter in 2002, debuted in MMA. Diego received wide-recognition in 2005 when he won the debut season of TV-reality The Ultimate Fighter. He participated in four various weight classes in the UFC tournaments. In 2019 Sanchez was included into UFC Hall of Fame. Diego is a happy family man. He has a wife and two children. Diego has a net worth of $5 million, accumulated through his career earnings.

Diego’s birthplace is Duke City. He was born there on December 31, 1981, and spent there all of his childhood. Very few is known about his family. From an early age, he loved to watch wrestling and boxing on TV. That’s why he wanted to do wrestling.

Studying at the local high school, he became the wrestling state champion. Diego started earning money early. He found a job in the United Parcel Service. At the same time, the young fighter joined a local MMA club.

Diego appeared in a professional sport in 2002, as a participant of MMA. He was unstoppable. He didn’t lose and could win 11 fights. He even won several battles being injured. In 2004 he won the KOTC Welterweight Championship. Soon Fox Sports 1 invited the fighter to take part in a reality TV series and MMA competition, The Ultimate Fighter. Diego agreed, hoping to get into UFC. On April 9, 2005, he won the final of the show and signed with UFC.

The debut appearance of Sanchez in UFC was in August 2005. He won Brian Gassaway. Also, he won the next four fights. He had an undefeated 17-0 record before his first loss, which happened on April 7, 2007. Diego was bitten by Josh Koscheck. In two weeks after the fight, it became known that Diego was ill on the eve of the fight.

He even was going to announce his retirement because of medical tests, which diagnosed Hepatitis C. However, the doctors questioned the test’s results, so Diego spent the fight and was defeated. On June 20, 2009, Sanchez vs. Guida served as the main event for the Ultimate Fighter Season 9 Finale. Sanchez came out with the split decision victory, but it was one of those fights where the true winners were the fans.

The fight was so entertaining that Sanchez was awarded a shot at the lightweight title soon after. In December, Diego lost to then-champion BJ Penn, but the memory of his best fight against Guida still lived. It was recognized as the fight of the year for 2009.

On March 3, 2013, Diego returned from a yearlong layoff to defeat Takanori Gomi. Following a controversial split-decision win Sanchez laid out his plan:

“The fight I want right now, and he has a fight lined up, but I want Nate Diaz. I want to be the first one to say I beat both the Diaz brothers. I’ve got the bigger brother on my resume already, so I want to get in there and get the younger brother.”

Next fight Diego spent in October 2013. He met Gilbert Melendez, who returned to the octagon after suffering a split-decision loss to Benson Henderson in a failed bid for the UFC lightweight title. Gilbert had long been considered one of the best 155-pounders in the world, and the narrow loss was his first defeat in almost five years. Sanchez lost the fight via unanimous decision.

Diego could win only five of ten battles during 2014 – 2019. In 2018 he got into an argument with Donald Cerrone, who blasted Jackson-Wink owners for how they handled the recent booking of his fight with teammate Mike Perry. Having checked out Cerrone's vitriol, longtime teammate Diego responded with his own venom, even offering to step in and fight Cerrone.

On June 9, 2019, the UFC released the announcement via their Twitter account that Diego Sanchez vs. Clay Guida fight, which took place on in 2009, would enter the UFC Hall of Fame. On July 5 it was placed in the Fight Wing section. Two days later Diego Sanchez spent a fight with Michael Chiesa on the main card of UFC 239 at T-Mobile Arena.

For several weeks he attracted the interest of viewers thanks to his quirky personality, unconventional approach and by talking up a new coach who had unlocked secrets he hadn’t known before.

Sanchez never took his eyes off Chiesa and sneered at him the entire time as Bruce Buffer was introducing the fighters, and referee Mark Smith was preparing to start the bout. But when the bell rang, the fun times ended for Sanchez, as did his modest two-fight winning streak.

Chiesa held a 119-3 advantage in significant strikes land and had five takedowns to just one for Sanchez. All three judges scored it 30-26 for Chiesa, who had then won two in a row and made himself a factor in the welterweight division. The battle between the former “The Ultimate Fighter” winners drew a lot of interest because of Sanchez’s oddball way of promoting it.

Speaking to Ariel Helwani in an interview during the event’s media day, Diego was given free-reign by the ESPN reporter to speak his mind. Some of the words, which he said:

“I’m not this old guy; I’m the Jedi. You’re going to see a change. You don’t get the old man; you get the real man, the man, the wise man. I am a Jedi. I’m anti-aging, and I proclaim that I am coming for my destiny right now. I’m coming to kill Chiesa.”

Sanchez showed his trademark resiliency in battling off several submission attempts, but he had next-to-nothing to offer Chiesa. It’s unlikely the loss will spell the end of the road for Sanchez, but it should propel Chiesa into a fight with significance in his division. In August 2019, the Nightmare will be taking his place in Combat Jiu-Jitsu Worlds tournament, which will feature a welterweight bracket.

Diego prefers to keep his personal life in secret and never answered the questions about his family. And it is not surprising given the behavior of UFC fighters during trash talking. However, Diego likes pouring all his feelings of love for his beautiful wife on Instagram.

The love story of Diego and Bernadette has evolved rapidly. They became engaged in three weeks after they started dating. And in three months the pair tied the knot. It was in December 2017. Although they decided to marry very soon, they are still together, leading a happy married life.

The spouses have two children, a son and a daughter. They are great parents to their kids and love them a lot. They often take them out and share their sweetest moment with their children on Instagram.

On April 13, 2019, it was a chat between Diego Sanchez and his friends. That day they decided to launch “Diego Sanchez Products” apparel. The friends created the perfect logo and designed shirts for the baseline foundation of the company. Currently, the shop is working, and everyone can make an order.