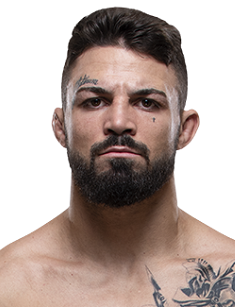 The Flint native, Mike Perry is widely known as the UFC fighter. As of summer 2019, he held a record of 13-5. He started as a boxer but held only one fight on the boxing ring. Mike is famous for numerous conflicts with another UFC representative, Colby Covington. He married in 2019 and hasn’t got sons or daughters yet. His net worth is roughly estimated at $500,000, including all of his properties and earnings.

Michael’s birthplace was Flint, a city about an hour north of Detroit that has struggled since General Motors closed some operations there in the 1980s. He was born to his parents on September 15, 1991. Mike spent most of his childhood in his native city. He barely went to the school when his parents divorced. His mom moved to Florida, while his father stayed in Flint. The little boy was forced to travel between cities.

That’s why Mike attended multiple schools, including several in both Michigan and Florida. He was athletic, but he didn’t have the opportunity to play for the school’s basketball, baseball, or football teams because of the low academic rating. Mike was bullied a lot at schools, as he was one of only a dozen white boys there. That prompted him to get into fighting.

Mike found himself in that sport and decided to develop his career by dropping out the school at his senior year. However, he wasn’t serious about the decision and started doing things on the wrong side of the law. He and his friends played GTA and wanted to be like that. Mike started smoking drugs, carrying guns, considering himself a gangster.

Despite all the mentioned, Perry found some time for fighting. At the age of 18, he had his first amateur fight. He was training and coaching at the American Top Team facility. But Mike was arrested for burglary and sentenced to two years of community control. He had to spend much of his time at his house, so he got out of the routine of training and fighting.

At the end of his community control, Mike failed a drug test and went to jail for several months. That helped him realize how much he was missing by not training and fighting, and he vowed to get on the right path.

Before MMA debut, Perry competed on the amateur level. He failed to come invincible, losing three of his 11 fights. On the professional stage, he won all of his early matches. He participated in various promotions all over the country in 2014 – 2016. And in 2016 he signed to UFC and debuted in UFC 202 event in Las Vegas.

Perry’s first opponent was Lim Hyun-gyu. He won without problems in the first round. However, Perry’s debut was connected to the racist scandal because of his coach’s words about Lim. In October 2016, Perry won his second UFC fight. Already impressive with two first-round knockouts in his first two wins, Perry also fought as an amateur in boxing and kickboxing.

Perry’s octagon career quickly overshadowed, as he lost in the third battle. In his bizarre show of gamesmanship, the Flint-native snapped a Polaroid of Alan Jouban when the pair faced off at ceremonial weigh-ins. Jouban didn't take the bait, though, swatting the photo away when Perry offered it to him, to which "Platinum" briefly responded with some parting words.

The sluggers had engaged in a war of words on Twitter before the ink of their contracts was dry, and they could settle it with their fists when they opened the event's main card in December 2016. Alan Jouban resisted the urge to brawl with Mike Perry, but it didn’t stop him from scoring a couple of key knockdowns in a victorious effort. Alan won Mike by decision.

Perry regained his reputation by victories in the next two battles and was preparing to fight against Santiago Ponzinibbio in December 2017, when Darren Till called out Mike Perry after his win over Donald Cerrone. Mike was sitting cageside for the contest, and jumped onto the octagon apron and got into a heated verbal exchange with Till through the fence. Both fighters were restrained, and immediate interest was generated to a fight.

It went a step further just before the conclusion of the broadcast when Perry conducted an interview with commentators John Gooden and Dan Hardy. He said Till was on his hit list next after Santiago, and he was willing to go to the Brit’s hometown of Liverpool to do it. But Mike lost his next fights, and the battle against undefeated Till became impossible.

In summer 2018 the two sparred with each other. In November 2018, Perry fought against Donald Cerrone and was defeated by submission. It became his fourth career loss. After defeating Alex Oliveira in April 2019, Perry was scheduled to fight in Montevideo, Uruguay on August 10. Vicente Luque became his welterweight opponent. The UFC Night was headlined by a women’s flyweight title bout between Valentina Shevchenko and Liz Carmouche.

The Uruguayan approached the event with five UFC wins in a row, finished all of his opponents by knockout, technical knockout or submission. Perry moved forward and looked to land power shots from the opening bell. Luque stuck with a more technical, counter-heavy gameplan than "Platinum".

Shots from Luque late in the round opened a gash on the left side of Perry's face. A sneaky flying knee from Luque caught Perry's nose and opened up the flood gates at the beginning of the third round. It seemed a serious injury.

Later in that round, Luque squeezed the neck of Perry in a guillotine chokehold, expediting the loss of blood from his nose which poured over Vincente's chest and onto the octagon floor. Perry continued to fight with a fractured nose until the final bell, and some members of his team even believed he should have won. However, Luque was awarded the victory via split decision.

Meanwhile, Mike Perry was taken to the hospital with breathing troubles that required surgery after suffering a gruesome nose injury. Both fighters won an extra $50,000 for the Fight of the Night award, which was given to their fight. Perry suffered his first loss since November 10, 2018, while Luque was riding a six-bout winning streak and was undefeated since the spring of 2017.

Mike is married to his longtime girlfriend, professional athlete, Danielle Nickerson. The pair tied the knot in 2019. Danielle went from girlfriend to a woman playing the roles of Mike’s personal assistant. She is always there at his training, corners him for his fights and even knows his opponents.

In 2018 the two announced their breakup. It happened soon after Perry lost a fight, on which Danielle was his head coach. However, it was not the reason for the end of their relationship. It turned out that Danielle could not stand ruthless comments about her relationship and looks, which were posted by Colby Covington, Perry’s longtime rival.

Colby wrote on her Instagram: “Hey, maybe having your ratchet horse faced girlfriend as your head trainer isn’t the smartest idea on planet earth. But hey, when you’re the product of cousins fucking in Ocala FL how strong can your decision-making skills be?”

At the beginning of 2019, the couple got back together after some time apart and in February Mike announced their fast wedding. Plenty of fighters reached out with supporting messages coagulating Perry on that special day, but there was one ruthless comment that reached the top and that every other comment mentioned ruining the engagement post.

It was Colby Covington again. He has had plenty to say about Mike and his wife Danielle over the years, and in August 2019 the pair returned fire from a swimming pool in Montevideo, Uruguay. Mike tried himself as an “actor”. In a video posted to Instagram, Perry and his wife “reenacted” Covington’s last victory over Robbie Lawler, accusing the former interim champion of having “pool noodle punches.”