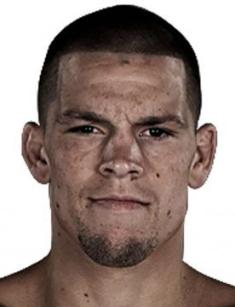 Nathan Donald Diaz is an American fighter who performs in the single mixed combats in the lightweight category.

Nate was born on the 16th of April in 1985, in Stockton, California in the family of the Mexican and ethnic Englishwoman. His father Robert Diaz left his family when Nate began to attend school. Melissa Brown brought up and took care of her three children - brothers Nick, Nate and sister Nina. The woman had to find a job in a couple of places to provide her children.

Nate Diaz tried to be like his elder brother Nick in everything. In his early age, Nick began to go in for martial arts. Since childhood, the boy was aware of the fact that he wanted to connect his biography with the sports. The Brazilian jiu-jitsu was his favorite type of fight. His everyday workouts with the coaches Nicolas Lipari and later with Cesar Gracie as a member of Cesar Gracie Jiu-Jitsu team have resulted in the fact that already being a teenager Nate had a brown belt.

At the age of fourteen, Diaz followed his brother and transferred to the fight section of Lodi, where he already received education at Tokai High School. At this new place, kids began to train at the boxer Richard Perez. Under the influence of the eastern philosophy in 2003, Nate stopped eating meat and animal food entirely in 2003.

Nate Diaz had his debut in the professional sports in 2004, when he defeated Alex Garcia with the help of chokehold. Nate took part in the second fight in 2005. That time the jury awarded Nate’s rival Koji Oishi with the victory. The opponent was ahead of the American fighter on a couple of points. In 2006 Diaz achieved four victories over Tony Juarez, Gilbert Rael, Joe Hurley, Dennis Davis and one defeat in the tournament with Hermes Franca.

In 2007, Nate Diaz appeared in the third season of the sports show under the title The Ultimate Fighter 5, which took place in Las Vegas led by UFC. Nate got into the team to the coach Jens Pulver. The training resulted in the inter-team fights. Diaz successfully performed in all tournaments and the final he fought with Manvel Gamburyan. The competition was very tiring for both fighters, but at the end of the round Manvel got a shoulder injury, and Diaz became the winner. The UFC company (Ultimate Fighting Championship) concluded the long –term contract with Nate.

Victories followed two years in a row. The triangle choke was the main reception of the fighter with which he defeated his rivals (Junior Assuncao, Elvin Robinson, Kurt Pellegrino). In 2009 Nate lost in the fights with Clay Guida and Joe Stevenson and both times the decision of the judges defeated him

In 2010, there took place three competitions with the participation of Nate Diaz. Nate lost his first fight with Gray Maynard Nate by the decision of judges. After that, he transferred to the welterweight category, and he won next two tournaments with Rory Markham and Marcus Davis. Diaz got permission to perform at once in two weight categories - light and welterweight.

The first fight in 2011 turned out to be a failure: Diaz lost to Dong Hyun Kim, and in spring there was held the tournament with Rory MacDonald. The fighters reached the third round, during which the rival hit Nate down the floor with the three blows. The fall resulted in indecisively in the competition: MacDonald became the winner. Diaz’s coach advised the fighter to return to the lightweight category, wrestling in the welterweight class became dangerous.

Nate had his next three competitions with Takanori Gomi, Donald Cerrone, and Jim Miller Diaz and again became a winner. The judges note the development of Nate's wrestling skills, the variety of attack methods. In 2013 there took place the tournament with the ex-champion of Strikeforce in lightweight Josh Thomson. He almost at once knocked out Nate and began to hit him in the head with his feet. The wrestler’s brother Nick Diaz who was watching the fight demanded from the judges to stop the fight.

Nate broke the contract with UFC for three months. After the victory over Gray Maynard in November of 2013, Nate left the sport for a year as he needed rest. When Diaz came back to the ring in December of 2014, he stood off the fight in a mechanical part with Rafael Dos Anjos but lost it on the points.

The next competition was set for July of 2015, but the representatives of the rival Matt Brown rejected the contract which was suggested by UFC. Nate had to take part in the tournament against Michael Johnson in December of 2015. The judges have chosen Diaz as the winner, and both wrestlers received an additional prize from UFC for the Fight of the Night.

In 2012 Nate Diaz found his happiness in his own experience with Misty Brown, the peer of the wrestler. The girl was born on the Californian coast. Since childhood she was engaged in the sports: she practiced softball and running. Misty supports her boyfriend during his competitions.

Young couple hasn’t got married yet, but they live together. The wrestler doesn't have children. Except for work and family photos, you can see the pictures of his beloved on Nate's Instagram page, where he has 1.7 million subscribers.

In March of 2016, there took part the tournament of Nate Diaz and Conor McGregor. The Irish wrestler wasn’t planning to fight with the American wrestler, but his rival Rafael Dos Anjos got injured, and UFC replaced him with the fighter from Stockton. During the second round, Conor was defeated by the chokehold after a couple of traumatic blows to the rival’s face. As a result, the pictures of the bloodied Diaz and Conor lying on the mat were shown to the whole world. After the tournament, Nate received the fee of $500,000. Conor received $1 million for the loss according to the contract.

According to the requests of both wrestlers, the revenge fight took part on the 20th of August of 2016. By the judges' decision, Conor McGregor became the winner. Diaz received $2 million. The wrestlers were noted with The Fight of The Night awards. Now the negotiations are held with Nate Diaz on the matter of the fight with Tony Ferguson and ex-champion Eddie Alvarez. But the American refused from the tournaments. The wrestler explained his actions by the fact that he had already broken the contract with UFC.