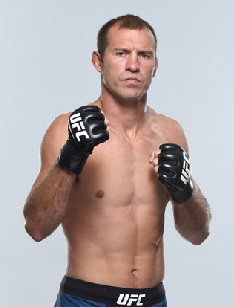 Donald Anthony Cerrone (mostly known under the nickname "Cowboy") is a famous American mixed martial artist, in the past – kickboxer. Currently, the sportsman is signed with the Ultimate Fighting Championship (UFC) and competes in their lightweight division.

Besides fighting, Cerrone has been involved in show-business. So, he shared with journalists he has been cast as part of the new Netflix limited series Godless from Scott Frank and Steven Soderbergh.

Donald Cerrone's birthplace is Denver, Colorado – he was born there on March 29, 1983. At birth, Cerrone had a cleft lip, which was repaired when he was a child. Besides, doctors stated he had an attention deficit disorder. Although the parents knew about the disease, Cerrone has never received treatment. As a kid, he often mixed up with fights.

Speaking about Cerrone's education, he studied at Air Academy High School. At an early age, he became interested in bull riding. Young Donald had to get through his parents' divorce and lived at his grandparents'.

20-year-old Donald Cerrone started dedicating himself to kickboxing and then later to Muay Thai. After several successful kickboxing competitions, the sportsman decided to focus on mixed martial arts (MMA).

He appeared on the Versus television series TapouT – the viewers could witness his fight against Anthony Njokuani. Donald knocked out the opposer in the first round with a triangle choke.

Once Cerrone was offered to fight against a purple belt in Brazilian jiu-jitsu. Then his grandfather purchased him home from Vail, Colorado and hired Brazilian jiu-jitsu black belt Carlos Carvalho – Donald had training three times a day with him. Carvalho was also a coach at Inyodo Martial Arts Club, where Cerrone kept on training for years in his early MMA career.

Cerrone was signed to fight in the WEC. His first opposer was Kenneth Alexander. Initially, the judges intended to call him a winner. However, they changed their opinion to a no contest when Cerrone tested positive hydrochlorothiazide, a banned diuretic.

On January 25, 2009, WEC Lightweight Champion, Jamie Varner became Cerrone's opposer. It was a spectacular fight which was stopped because of Donald – he hit Varner's temple with an illegal knee while Varner was still on the ground. Varner was given time to recover, but he was unable to continue - he had double vision and a broken hand.

On December 19, 2009, Cerrone fought against Ed Ratcliff. Donald beat him via third-round submission.

The next big fight brought a failure for Cerrone. So, on April 24, 2010, fighting against Benson Henderson, he was defeated.

September 30, 2010, was marked by a highly anticipated rematch between Jamie Varner and Donald Cerrone. Cerrone was named a unanimous winner after dominating in all three rounds. In the gaps between the round, two opposers pushed and insulted each other – they were real enemies. After the match, Cerrone said he was ready to face the opposer again in Arizona, Varner's home state, to settle their score once and for all.

However, instead, he fought against Chris Horodecki on December 16, 2010, and won the match via submission.

Besides, his fans expect his fight against Conor McGregor. The two called each other out on Twitter. However, the date has not been set yet. UFC commentator Joe Rogan said their meeting was close to happening.

Donald Cerrone’s net worth is evaluated at $5 million. Donald’s pay per fight is a powerful income stream but he has also bonuses and various endorsement deals.

Donald Cerrone was once in a relationship with Brittney Palmer, an American ring girl and model. The love between them began when both of them worked for the WEC promotion. However, the two ended their relationship by the time they entered UFC.

Later Donald got linked with Lindsay Sheffield, and fans even speculated her to be his girlfriend. The two were rumored to be dating each other as the fans who follow them over on social media saw the posts of them together on numerous occasions.

Donald and Lindsay Sheffield have been an engaged duo since 2014. The pair maintain their romance under the radar of the media despite their fame.

Although Lindsay is not Cerrone’s wife, she gave birth to their son on June 29, 2018. They have named him DACson Danger Cerrone. Kid’s middle name might be a quirky reference to how Donald is inside the ring.