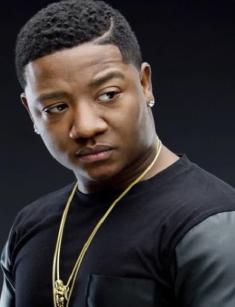 Yung Joc, a 36-year-old successful musician, is nowadays one of the wealthiest rap representatives worldwide. In his career, he has collaborated with numerous music idols, such as Eminem, 3Lw (on the song ‘Bout It’), Cherish (on the track ‘Killa’), Rick Ross (recording the single ‘Ugh’) among others. What makes Joc so special and help him reach high results? The answer is in the article!

Robinson's birthplace is Georgia, the United States. He was raised in the family of Stanley Tucker, an owner of a hair-care production firm. The man introduced Robinson to the world of show-business. Due to his dad's help, the rapper made his first significant project – created a jingle for Revlon brand. Also, being admired by his father's success, Yung Joc created a music label.

In his future admissions, Joc shared he had been a subject of bullying at school – his mates humiliated the rapper for his ethnicity and black skin.

Yung Joc's music career got started in 2005 when he got acquainted with a famous producer and released the track entitled ‘It's Goin Down’ under his guidance. It advanced to the top of various American music charts. Several months later, the musician concluded a contract with a label founded by Sean Comb. Together, they presented Joc's first collection under the name ‘New Joc City.’ Also, Joc pleased his fans by publishing the track ‘I Know U See It’ which happened to be a real hit.

To promote the album, the musician embarked on a concert tour staring in Chicago.

Around that time, Yung Joc contributed to other artists' projects, such as Danity Kane's single ‘Show Stopper.’ In 2006 the musician was included in the list of the wealthiest rap singer – he held 20th place.

2007 brought the artist a new collection entitled ‘Hustlenomics.’ Fans especially liked its best songs ‘Bottle Poppin’ and ‘Coffee Shop.’ As for its sells' level, it was evaluated at 70,000 copies in the first seven days after its presentation. In two following years, the number increased to 200,000 copies.

Additionally, in 2007 he took part in the recording of ‘Lookin Boy’ by Hotstylz. The following year, he contributed to such tracks as ‘So Fly’ and ‘Get Like Me.’ 2009 was marked by Joc's appearance on the song ‘Imma Put It on Her’ by Day26. In the summer of the same year, fans could listen to Yung Joc's new project – a mixtape named ‘Grind Flu.’

Shortly after he dropped his song ‘Yeah Boy’ and its video clip. That time Joc admitted he had a dream of collaborating with musician DJ Premier. Later Yung Joc pleased his listeners by presenting ‘I Know What She Like’ recorded alongside Yo Gotti.

In fall 2012, Yung Joc parted ways with a recording company he had been working with for several years.

Two years later, the musician added ‘I Got Bitches’ and ‘Features’ to the list of his song.

Yung Joc’s net worth is evaluated at $8 million.

In 2010 the artist launched a record music label entitled Swagg Team Entertainment. Nowadays, it consists of 5 members, apart from Joc.

In 2014 Yung Joc began starring on the TV series named Love & Hip Hop: Atlanta. As for his other TV projects, the musician appeared on Scared Famous in 2017.

The rapper is a father for eight kids (3 daughters and 5 sons) by four different girlfriends (none of them has been his official wife). Sina Bina is mother of one of his babies.

Speaking about his affairs, he has dated Kadiyah and Karlie Redd. In spring 2019 the musician got engaged with Kendra Robinson – the two don’t have children together.

Yung Joc is named a ‘king of hair’ – he has published a series of videos on YouTube showing how he cared about his hair and what hairdresses he preferred.

Yung Joc was mixed up with a scandal with Gucci Mane. So, the latter released the track entitled ‘Fuck The World’ where he reportedly humiliated Joc. As a response, Yung publicly named the rapper ‘a master in asserting himself at the expense of others.’

In 2009 he gained public attention again after an announcement he would refer to judge blaming several record companies of not paying royalties.

In 2011 Yung Joc had to get through a robbery of his recording studio. Police succeeded to determine one of the criminals.