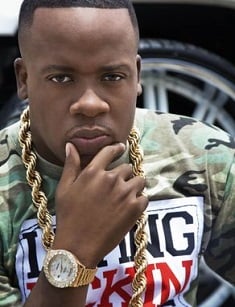 Yo Gotti (official name is Mario Mims) is one of the brightest and the most famous representatives of a Memphis rap. He started rapping at the age of 14 under the pseudonym Lil Yo and released his first album when he was 15. Today his lyrics have several millions of fans worldwide. The singer has more than 1.3 million followers on Facebook, 4 million on Instagram and about 400,000 on his Twitter profile.

So, why is this musician so famous? Let's know!

The future rapper was born on May 19, 1981, in Memphis, Tennessee, United States to the middle-class family. The city he was born in had a population of nearly 50,000 people (75% of them were black)

His father was a gym instructor from Zimbabwe, while the mother had South-African descendants.

Both Mario’s parents and other family members were hustlers. When he studied in the 2nd grade, all his family was arrested, and he had to survive.

Initially, little Mario followed-in their way: stole, smoked, drank a lot. However, one day he understood that it is dangerous to carry on living this way. Yo Gotti said: ‘Either you hustle till you go to jail or you transition out.’

However, it should be noted that Gotti’s family was a religious one. They often attended Church.

Yo Gotti has a brother Anthony.

The first musician’s moniker was “Lil Yo.”

The first Yo Gotti’s album was released in 1996. This collection became the hit at once, the rapper got his first fans and became one of the most popular musicians in the district. According to his future admissions, rap icons like Master P, Dr. Dre and Tupac Shakur influenced him and inspired for the music.

After such a brilliant start, Yo Gotti began improving his music and managed to become an American hip-hop star in the early 2000s. He released his next albums between 2000 and 2006; they were called “From Da Dope Game 2 Da Rap Game”, “Self Explanatory”; “Life”; and “Back 2 Da Basics.”

In 2010 Yo Gotti released new singles 5 Star, Women Lie, Men Lie, and I Got Them. The songs attracted the attention of the major label Polo Ground, RCA. Under the leadership of the label, the musician released the album ''Live From the Kitchen'' in 2012. Many famous stars took part in its record: Rick Ross, 2 Chainz, Wiz Khalifa, Big Sean, Nicki Minaj, and others. The album brought Yo Gotti an enormous commercial and critical success. The album peaked at No. 12 on Billboard 200. In the first week after its release, the level of its selling reached 16,000 copies.

The following year happened to be successful for the young rapper. He released the new album titled “I Am” on the Epic Records label. It battled to No. 7 on Billboard 200.

The level of its selling reached 150,000 copies. It was even nominated for the 2014 BET Hip-Hop Awards, the category “The album of the year.” Its song I Know played at every party.

In the same year, Yo Gotti founded his own label CMG (Collective Music Group). The series of his next mixtapes were released through this label.

At the beginning of 2013, Gotti announced that his label CMG had signed with Epic Records. On 28 May 2013, the musician claimed that his 6th studio album would be named “I’m.” Its first single got the name Act Right and peaked at No. 5 on Bubbling Under Hot 100 Singles and No. 39 on Hot R & B and Hip-Hop Songs

On August 22, 2013, Yo Gotti announced his future which would later take place from the 14th of September until the 19th of November, 2013. He gave the concerts in more than 40 cities.

Gotti went on releasing the mixtapes through the CMG label: Chapter One, The Return, Cocaine Muzik.

2016 was marked by Yo Gotti’s new album “The Art of Hustle” which arrived via Epic Records and CMG. It peaked at No. 4 on Billboard 200. More than 45,000 copies were sold in its first week. Also, its single Down in the DM became a real hit and reached No. 13 on the Billboard Hot 100.

In the same year, Meghan Trainor, an America singer, suggested Gotti participate in her project - “Thank You” album. In late 2016, the rapper dealt with Jay-Z and Roc Nation label in partnership with his CMG imprint.

On June 1, 2017, the rappers Yo Gotti and Mike WiLL released the joint mixtape Gotti Made-It. Its hot single ''Rake It Up'' with Nicki Minaj reached No. 1 on Billboard Hot 100.

In 2017, Gotti released the next album “I Still Am.” Its song Juice was on top of the charts. In the same year, Gotti started working with the rapper Moneybagg Yo: they released the joint songs ''Doing Too Much'' and ''Reflection'' which brought them a commercial success.

Yo Gotti has been in trouble with the law. So, in September the rapper was accused of taking part in the rapper Young Dolph's shooting. According to the FBI, the disagreements between the musicians led to the crime.

However, later Gotti was cleared of the accusations, but his colleague Corey McClendon was arrested for attempted murder.

The Young Dolph shooting occurred in broad daylight in the valet parking area of the Loews Hollywood Hotel at the intersection of Hollywood and Highland, according to KTLA. Rapper Young Dolph had been staying at the hotel, along with some others, including Yo Gotti, who has been named a “person of interest” by the LAPD.

The USA Today said: “McClendon, 43, is a known associate of Gotti (real name Mario Mims), who was charged with nine other men with aggravated riot in a melee that led to the shooting of six people in the parking lot of nightclub in Memphis in November 2010. Local media reports at the time said McClendon, then 36, was one of the men charged after he and Yo Gotti got into an argument with another rapper, OG Boo Dirty. But a few months later, all charges were dropped by the Shelby County District Attorney’s Office because there weren’t enough witnesses to the fight.”

Gotti has a net worth $5 million.

Collective Music Group also is known as CMG, formerly known as Cocaine Muzik Group, is a record label founded by Yo Gotti. Earlier, the rapper was its President and CEO.

The first official release of the label was the 6th Gotti studio album called “I Am.” The label released a collective project featuring the whole roster titled Chapter One in 2014. At present, the label’s President is Brandon Mims, Gotti's relative

Yo Gotti married Lakeisha Mims in 1999. The woman gave Gotti three beautiful children: 2 daughters and a son. However, in several years they divorced. The court concluded children to live with their father.

However, according to some rumors, Gotti has more kids. So, some sources inform that he has had affairs with Jamie Moses and they have three children together. There is a gossip that the famous YouTuber De'arra Taylor is Gotti's daughter.

Today Gotti lives with the children in a luxurious house in Memphis. Also, he has a villa with a pool and parking in Hollywood Hills.

Gotti is interested in cars and has a vast collection of them. So, the rich rapper owns expensive cars: Wrangler, Porsche Panamera, Porsche 911, Rolls-Royce Ghost, Cutlass, Lamborghini Aventador and White Bentley. He seems to like white cause the majority of his vehicles are white. Gotti also owns a big jewelry collection, which is worth approximately between $0.75 million to $1.25 million.

In general, Yo Gotti has released six studio albums, such as:

The new album “Trapped” will be available to download soon.