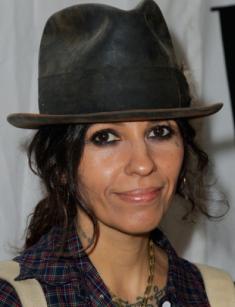 Linda Perry is a famous American musician who earned her first fame as a member of the group 4 Non Blondes. Later, the woman created several hits for top singers and established two record companies.

The would-be songwriter was born in Massachusetts on April 15, 1965. The girl’s origin was mixed: the mother was Brazilian, and the father had Portuguese and Native American roots. Both parents were musicians and instilled the love of art in their children; Linda had six siblings.

In 2014, the producer confessed in the show Behind the Music that one of her half-brothers, Mark, sexually molested when she was a child.

The young woman wrote her first song, “Pity Girls”, at 15. In that period, she had to fight against kidney disease and reliance on drugs. Music became a breathing hole for Perry; she focused on her career.

In 1986, Linda moved to San Francisco; she kept auditioning for girl bands and earned her living as a waitress and a street musician.

1989 brought the turning point: the leader of 4 Non Blondes Christa Hillhouse invited Perry to the group. The debuting album Bigger, Better, Faster, More! was released in 1992.

Linda was not fond of the group and its “polished” sounding; she left in 1995 and started her solo career; this is when her best famous songs were presented. Besides, the musician collaborated with many of her colleagues: Dolly Parton, Susanna Hoffs, and others.

Since 2001, Perry has been working as a songwriter and producer for top stars: Courtney Love, Alicia Keys, Kelly Osbourne, James Blunt. Everybody knew the lyrics of Christina Aguilera’s smash song “Beautiful” in the 2000s. The artist’s recent career pertains to TV shows; her iPhone-recorded covers are immensely popular, too.

Apart from music, Linda Perry is known for her style: she has a talent in fashion and design; one can often see her wearing a leather jacket and a high hat.

Linda is openly gay; she has had several relationships with women. In 2009, she started dating the actress Clementine Ford, but the couple broke up the next year.

Sara Gilbert, the star of the series Roseanne, became the producer’s next love. They began to see each other in 2011 and married officially in 2014; Linda adopted her new wife’s children Sawyer and Levi. In 2015, the spouses welcomed their son Rhodes. However, things have not been smooth recently.

Linda Perry has an official Instagram page; she posts work-related and personal pictures there.

In December 2019, the media revealed that Gilbert had filed for divorce with Linda Perry. The “irreconcilable differences” were named as the cause. The celebrities are going to have joint custody over their son and no spousal support; they will probably remain friends.