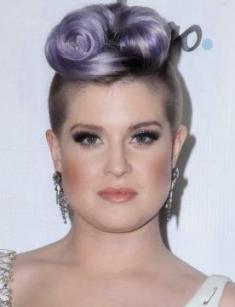 The daughter of the famous rock musician, Kelly Osbourne became a star early and chose the way of a media personality. The woman has tried herself as a singer, actress, and fashion designer. The audience remembers her for her expressiveness, bright looks, and scandals.

Kelly Michelle Lee Osbourne was born on October 27, 1984, into the family of Ozzy and Sharon Osbourne. The girl had an elder sister Aimee and a younger brother Jack; besides, she had a half-brother Louis and half-sister Jessica from the father’s first marriage. Elton John became Kelly’s godfather.

The girl’s childhood happened when Ozzy Osbourne’s career was at its peak: the musician was the soloist at Black Sabbath. Kelly spent her early years in various colleges and hotels in Great Britain while Ozzy was touring all over the world. The father’s behavior influenced the would-be celebrity’s traits of character and manners: the man could appear drunk or in a drug haze in front of his children.

In 1995, Kelly and her family moved to Beverly Hills, Los Angeles. The young woman started going out to night clubs and parties. The mother tried to control her daughter; as the singer mentioned in her interviews, Sharon hired a detective to watch her.

Young Osbourne had issues about her appearance; she also suffered from excessive public attention and began to use alcohol and drugs. In 2005, when the family reality show finished, she agreed to undergo a treatment course at the Pasadena Recovery Center. She came there three times but failed to recover; she began to take Vicodin.

The rescue was sudden: the woman was invited to Dancing with the Stars and gained much motivation. She put off 20 kg. for the project and learned how to love herself genuinely; Kelly realized it was possible to live a cheerful life without bad habits.

Kelly Osbourne earned her popularity in 2002 when the reality show The Osbournes came out. The program proved to be a TV hit, and Kelly contributed to its success: she stood out for her gaudy looks and terrible temper. The media often talked about Kelly’s contrariness and scandalous behavior.

Following the wave of success, Kelly Osbourne began her music career and presented the debuting solo album Shut Up with the cover on Madonna’s “Papa Don't Preach”. She created several music videos including “Come Dig Me Out”. The album did not enjoy much popularity, and Epic canceled the contract in summer 2002.

The failure did not discourage the artist. In fall 2003, she signed a contract with Sanctuary and re-released the debuting work under the new title, Changes. This decision was inspired by Black Sabbath’s ballad with the same name; Kelly sang it with Ozzy and added it to her renewed work.

The second album caused much excitement among fans and the media; Kelly looked like she had put off some weight. However, the picture was made in photoshop; many people were disappointed.

The third album, Sleeping in the Nothing, was notable for lyrical and dance motives and became the most successful collection; fans and Kelly herself were satisfied. “One Word” was the most popular song. The musician had no large shows, only a few performances.

The celebrity kept looking for the meaning of her life and tried various activities. She debuted as an actress at 20 in the teenage series Life as We Know It. Soon, she presented her clothing line Stiletto Killers that remained popular for two years and wrote for the column in the teenage newspaper The Sun.

In the 2009, Osbourne published her autobiography Fierce. The same year, she directed six episodes of The Osbournes reboot. Still, the idea failed.

The artist was actively engaged in social work. In 2007, she participated in the show The Salon that raised awareness about people with HIV/AIDS and their problems. In 2010, Kelly and Ozzy participated in the campaign protecting LBGT people’s rights.

The star has participated in more than ten movies and series. In 2012, she appeared in So Undercover; 2014 brought the thriller Sharknado 2: The Second One. Besides, Osbourne has been nominated for many music awards.

When Kelly joined Fashion Police hosted by the actress and fashion icon Joan Rivers, she seemed to have found the best job. Osbourne collaborated with Giuliana Rancic and George Kotsiopoulos who talked about celebrities’ looks ironically and even with sarcasm. However, Osbourne left the show and explained it by disagreement with Rancic. Rumors had it that Giuliana insisted that Kelly should be fired.

22-year-old Kelly almost married Matty Derham at the Electric Picnic festival in Ireland. Later, the young woman presented it as a joke and said there was no ceremony.

The artist dated the photo model Luke Worrall for more than a year; they engaged in spring 2009. However, the man cheated on his fiancée, and the couple broke up.

As long as Kelly went through two unlucky romances, she decided to keep her private life secret. She was seeing the chef Matthew Mosshart and rarely gave any comments about it.

The would-be lovers met at Kate Moss’s wedding in summer 2011. In 2013, Kelly and Matthew got engaged secretly; the next year, the media reported about their split-up. There were also speculations that Ricki Hall was the celebrity’s boyfriend; their pictures often appeared on the Internet.

Today, Kelly leads a socialite life and frequently attracts the paparazzi’s attention by dramatic changes in her looks. Osbourne put off some weight and supports a healthy lifestyle.

In 2014, Kelly got a tattoo on her shaven temple: the word “stories” in bright violet ink. The popular tattoo artist Dr. Woo created it for her; the musician posted a picture on her Twitter page and wrote:

Unlike other family members, Kelly’s personal life is mostly calm. In comparison, her parents announced their divorce in 2016, after 33 years of marriage, and then took their words back; more than that, they repeated their wedding vows in 2017. The woman’s brother, Jack, is a father of three kids: his third child was born in February 2018.

In spring 2018, the paparazzi took pictures of Kelly and an unknown young man. Today, she is dating the model Jimmy Q.

The project Runway Junior is one of the celebrity’s recent works; she is a jury member there. More than 2.1 million people follow the woman on Instagram.