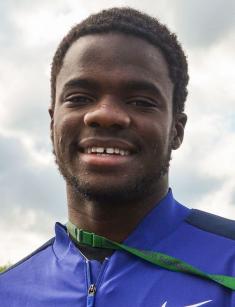 Frances Tiafoe is one of the youngest tennis players in the world who has broken several records. When the athlete was 15, he won Orange Bowl; he also became the Delray Beach Open Champion at 20. Thus, the man is the youngest The United States Tennis Association champion.

Frances Tiafoe and his twin brother Franklin were born on January 20, 1998, in Hyattsville, Maryland. The boys’ parents, Constant and Alphina Tiafoe (née Kamara), escaped from a civil war in Sierra Leone and migrated to the US. In 1999, the father got hired as a construction worker at the Junior Tennis Champions Center in College Park, Maryland. When the center was finished, Constant became a watchman there.

For the next eleven years, Frances and Franklin lived with their father in the Center; they took the opportunity and started playing tennis at four. As for weekends, the boys spent them with their mother.

Constant provided his sons with the places in the Center without qualification tours. The coach Misha Kouznetsov took an interest in Frances’s story, technique, work ethics, and urge to win. He began to train Tiafoe in 2006 and collaborated with him for nine years until the young man left for the USTA National Training Center in Boca Raton, Florida.

Court confidence and sharp techniques helped Francs earn some fame before he appeared in professional sports. Tiafoe won many titles and reached number two in the ITF Juniors ranking.

The 14-year-old athlete won the most prestigious international competition, Les Petits As in France; the next year, he became the youngest player who won Orange Bowl in the match against his compatriot Stefan Kozlov. Several months later, Frances gained the victory at Easter Bowl. These achievements made Tiafoe the best junior at the 2014 French Open.

The sportsman continued to show top results at the US Open junior Grand Slam tournament until the French athlete Quentin Halys defeated him in the semi-final game. August 2015 brought the last junior victory at the USTA Junior National Championship; Stefan Kozlov was his rival again.

The professional debut took place at Citi Open in Washington; Frances was 16. The Russian tennis player Evgeny Donskoy defeated him. Although Tiafoe had a wild card into the US Open, he did not succeed there; the Japanese athlete Tatsuma Ito won the victory.

When the American combined his effort with Michael Mmoh, he reached the long-awaited success. The sportsmen managed to outplay the tennis old-timers Víctor Estrella Burgos and Teymuraz Gabashvili at the ATP doubles. However, they failed to reach the second round.

In March 2015, Tiafoe won the first professional title: he won the ITF Futures in Bakersfield, California. The next month, he participated in the ATP Challenger. In the beginning, the athlete was not even included in the Top 800 players, yet the chain of remarkable victories brought him to Top 300. Little by little, the American was earning his place in the sun. Eventually, the young man reached the final and faced the Argentinian player Facundo Bagnis: it was the first victory over a Top 100 opponent.

Thanks to his brilliant performance, Frances got to the French Open. Still, he was not much lucky and lost to the Slovak Martin Kližan. Despite the failure, Tiafoe became the first 17-year-old American who participated in the core of the competition. The same year, he debuted in the US Open with a wild card. Overall, the athlete improved his rating and became number 176, even though he lost to the Serbian player Viktor Troicki and the British Daniel Evans at ATP Challenger.

By the end of 2016, Frances stopped the chain of failures and surpassed the Salvadoran Marcelo Arévalo; he received the first ATP Challenger title. The man’s ranking improved up to the 108th position which made Tiafoe the highest-paid athlete under 18. Soon, Tiafoe debuted in Australian Open; it was the first time he joined the starters in the Grand Slam Tournament. The athlete’s splendid victories brought him number 65; he also reached the first ATP doubles final.

In 2017, Frances participated in Wimbledon and defeated Robin Haase from the Netherlands; the victory over the world’s number seven, Alexander Zverev, followed. Inspired by these high achievements, the legendary tennis player John McEnroe invited Tiafoe to the Laver Cup team that consisted of top 25 sportsmen. However, Frances lost in the first match against the Croatian Marin Čilić.

The beginning of 2018 was also unsuccessful: Tiafoe won only nine out of 38 games. In the course of time, the promising athlete’s performance became more smooth. He reached the ATP quarterfinal but lost to one of the top players, Kevin Anderson.

Thanks to a wild card, the sportsman could participate in Delray Beach Open; he became the first “wild” athlete who won the tournament. Encouraged and inspired, the young man defeated his icon, number ten Juan Martín del Potro, as well as Chung Hyeon and Denis Shapovalov. Tiafoe was so winged that he crashed number eleven, the Spanish player Pablo Carreño Busta and reached the ATP final again; however, he lost to João Souza. At that period, Frances was included in the top 50.

2018 was marked with another attempt to win the Laver Cup; still, Tiafoe lost to Grigor Dimitrov in the first round.

Similar to the majority of American tennis players, Frances’s style is aggressive and attacking; it is based on a powerful right serve. His serve speed reaches 225 km/h; normally, it is about 190 km/h. When Tiafoe faced John Isner at the US Open, the latter said that Frances had, probably, the best serve in the modern tennis.

Young and busy with sports, the athlete is also happy in his personal life. Frances has been dating his colleague, Ayan Broomfield, since February 2016. The lovers post many pictures together on Instagram and openly talk about their feelings; they might be considering marriage.

As Tiafoe confessed, he entered professional sports for his parents. In March 2017, the young man bought a house in Maryland for his mother; he also purchased an apartment in Orlando for his father. Today, the sportsman is not looking for money – his current net worth is about $2 million – he dreams of becoming the number one tennis player in the world one day.

Juan Martín del Potro is Tiafoe’s icon; the young man had his first tennis ball with an autograph from him. They have faced each other twice; each player won a victory.

“One of my biggest motivations – to get more black people playing tennis. I’m just trying to inspire everyone, doesn’t matter what race… especially younger people”, the athlete mentioned in one of his interviews.

Tiafoe began the 2019 season with the breakthrough at Australian Open: he reached the quarterfinal and defeated Kevin Anderson, Andreas Seppi, and Grigor Dimitrov. However, the second top player Rafael Nadal outgunned him.

Tennis experts predicted the old-timer’s victory. Frances had the same opinion; he confessed that it was quite challenging for him to play against such a powerful sportsman.

ATP New York Open was held in the United States on 11-17 February 2019. Tiafoe faced Jason Jung (Taiwan) in the first match. The athletes had met several times before and showed pretty aggressive playing. Jung was considered the favorite of the game; eventually, he did win in two sets.