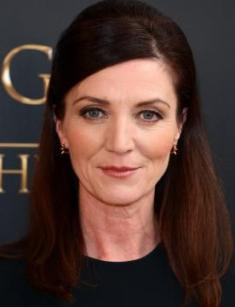 Michelle Fairley is a famous actress from Northern Ireland. In her career, she played in many movies and TV-shows but is mostly known for the roles of Catelyn Stark in the HBO series Game of Thrones (2011–2013), Dr. Ava Hessington in multiple episodes of USA Network series Suits (2013), and terrorist Margot Al-Harazi, the main antagonist in 24: Live Another Day (2014).

Michelle Fairley was born in Coleraine, Londonderry, Northern Ireland to a middle-class family. Her birthday is January 17, 1964. Her parents Bryan and Theresa Fairley worked in a local pub. Besides Michelle, they had daughter Simone Fairley. From the very childhood, Michelle dreamt about becoming an actress. As a teenager, she played in the Ulster Youth Theater. Michelle studied at the Catholic grammar school.

Michelle Fairley is of Irish ethnicity.

Having graduated, young Fairley changed the place of her living: she moved to Belfast where developed and improved her professional skills and gained experience. In the 1980s, the talented young star decided to move again. Then she started living in Manchester – there she entered

Studying there, Michelle continued doing her favorite activity – playing. One of her mentors introduced her to the famous playwright. Due to decent recommendations about Fairley, the dramatist invited her to do the play Joyriders – it was her first serious project.

In 1986 the actress moved to London with the theater. In 1988 Michelle gained enormous popularity for playing a central role in Daughter of the Sea.

However, it was not a limit for the talented girl. At that time she started appearing on TV-screens. So, in 1987 Fairley starred in the film Cidade Oculta. Many directors noted her talent and invited to take part in their works. So, she played on a TV-show Lovejoy – its recording took eight years. Later she was invited to take part in another show Inspector Morse – Fairley worked on this project from 1987 to 2000. Also, Michelle played in a criminal drama Comics (1996) and Precious Blood (1996).

In 1994 Fairley played a role which impressed everyone. It was playing called Death And The Maiden. There the woman acted an angry, vengeful prisoner. It was a sensation – Michelle's popularity started growing and growing.

In 1996 the actress got her first comedian role on a show Safe and Sound on the BBC channel. It was the story about a feud between religions in Northern Ireland. Michelle acted protagonist’s romantic sister Eleanor who was always drunk. Although the show had only one season, it set in motion Michelle's TV-career.

In 1997 the woman starred as Fitzpatrick on the show The Broker's Man' on the BBC channel. In 1999 she got the role of Ray Winstone in the comic drama Birth, Marriage and Death and won a prestigious award.

The same year, Fairley joined «Royal Court» - the club of actors of a local theatre. There playings with her attracted a considerable audience. Working there, the actress took part in 277 playings.

In 1998 the woman was invited to take part in the film A Soldier's Daughter Never Cries by James Francis Ivory. In 2001 she worked alongside Nicole Mary Kidman in the movie The Others.

In 2004 Michelle took a leading role in the playing Ashes to Ashes. In 2007 she played in Othello as Emilia. The work earned the most prestigious awards and nominations.

In 2009 the woman played on the scandal TV-series Misfits as Lucy. The next year became especially productive for the woman. So, in 2010 she played in the films Chatroom, Harry Potter and the Deathly Hallows: Part 1 as Mrs. Granger – she appeared in the episode for a minute.

On March 19, 2010, it was announced that Fairley would replace Jennifer Ehle on a TV-series Game of Thrones as Catelyn Stark (née Tully). Michelle's role is a wise, prudent woman who has got through many losses and breakups, but has always supported her elder son Robb and dreamt about seeing other children – Sansa, Arya, Braun, and Rickon.

She played there two seasons (25 episodes) and gained massive popularity due to it.

Game of Thrones is a unique project where it is difficult to say which character is primary and which is secondary.

So, the woman's talent is versatile: she has coped with the most challenging and demanding roles and has never limited herself.

Now Michelle is working on the show Suits – she acts Ava Hessington, the CEO of Hessington Oil who was being charged with bribery and the murder of her opposers by Cameron Dennis and had to refer to Harvey Specter (actor Gabriel Macht), called the best closer in the city.

The site IMDb evaluated Michelle’s net worth at $3 million.

When it comes to Fairley's personal life, husband and kids, she is very secretive. Although there are many rumors about her relationships and family, there is no proof. Michelle Fairley had once made it to the headlines for being rumored about dating a mysterious guy in 2016. Now it seems like she has dismissed all those rumors and cleared up on it all.

She has denied the fact of dating someone currently. Though she did come out of a serious relationship with a man as they had lived together for seven years. In an interview, she clarified that she did use to live with a partner and that too for an extended period. Michelle has stated that she has no intentions of tying the knot and wishes to remain single for the time being.

Michelle has said she has not yet found her ideal husband. Sources close to her have also said that Michelle wouldl never find a suitable husband as she loved her single life way too much and didn’t want to get married. However, it is known that being a teenager Fairley had many boyfriends and broke a lot of hearts.

Woman herself has been included in the list of ten hottest female celebrities of Ireland – her nude pictures have always attracted men's attention.

However, speaking about her personal life, she said:

“There are times when you have to face the truth, you have to face reality in your life and you either go in with someone, or you go, ‘No, I want a change, I need a change. It’s my life’. It was a voice in your head that you can’t but listen to. Though you ignore it for a long time.”

There also are rumors that she has a daughter named Hermoine Jean, but there are no whereabouts of the child’s father which are why this news might either be a rumor or she might have adopted the child.

When journalists asked her about children, she said:

“I missed the gene. I was never born with that in my psyche, in my body. My sister Simone, from very young, you could tell instantly she did. I have many nieces and nephews, and I am godmother to many children, but it’s never been in me. Sounds awful, doesn’t it? I expect people to always go, ‘Oh my God, cold b—-.’ Why? Why have children just because I’ve got a womb?”

Also, there were many gossips of Michelle being a lesbian as she has no history of either dating or having a boyfriend which led to speculation of her being a lesbian.

At present, Michelle has a net worth of $3 million.