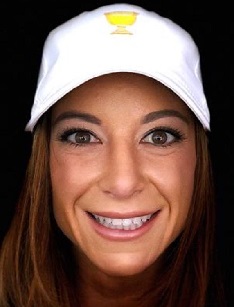 Erica had much attention as the latest partner of worldwide known golfer in recent years. She is from a middle-class family and has an elder brother.

There is little information about her early ages on the Internet. She is from a middle-class family; her elder brother is 36-year-old Scott Herman. She graduated from the University of Central Florida with a Bachelor’s degree. Herman’s religion is Christianity. It rumors that her brother and other members of the family had run-ins with the law about drug-related issues.

Erica had much attention as the latest girlfriend of worldwide known golfer, and always stays in the public eye, but she had a life pre-woods. She made a career in restaurant business. She met Tiger working in his restaurant. After meeting soon they became a couple.

Her net worth is about $300, 000. In 2018 after failed business venture, Erica met severe financial hardship. She had to pay back the debt for 67 years.

As we know, her ex is Jesse Newton, but by the time when Erica met Tiger, she was alone. After their meeting, they started dating soon. The couple appeared at Presidents Cup together. From the very beginning, they didn’t hide the relationships. The legendary golfer cuddled her, considering that there were reporters everywhere. Herman talked with wives of the other golfers and took photos with three former presidents of USA.

Erica doesn’t flaunt her relationships, but at the same time, there are gossips about her. Media gave her the name “gold digger” and “hard partier.” Rumors have it that Erica was following Tiger like a predator during ten years and searching the chance to get the golfer on the hook.

Before he met Erica Woods had a rather complicated life, he dated with various girls who, as media says, in the nude made the golfer “sex animal.” During his marriage to Elin Nordegren Woods slept with 120 women. He was arrested for drugs issues and fallen asleep at the wheel, besides the sportsman had surgery on his lower back.

Erica gave the most significant thing to Tiger – stability, which he needed to climb out his career slump.

In 2017 their relationship became official on Instagram. Tiger published one photo with Erica, but since that time his girlfriend hasn’t appeared on his Instagram. The golfer decided to keep their relationship off of social media. As to couple’s plans, as the sources say the American golfer hasn’t had marriage on his brain, at least yet.

Her favorite celebrities are Johnny Depp and Jennifer Aniston. In her free time, Erica loves shopping, traveling, and visiting Spanish and Chinese restaurants.

As we have seen, Erica’s most significant interest is a sport. Thus, she attended Wimbledon in 2018 where she cheered on Serena Williams. She participated at the Ryder Cup Gala at the Palace of Versailles along with Rory McIlroy, Allison Stokke, and Rickie Fowler in 2018.

Today she enjoys her new relationships and spends with her boyfriend much time cheering him on matches from where golfers’ families stay. On April 2019 the American golfer engineers improbable fifth Masters victory. His emotional celebration Woods shared with a tight circle of friend and relatives, and she was among them.

Though they haven’t legally registered their relationship, she accompanies him at Tournaments and in a social scene like a loyal spouse.

There is no official information about Erica Herman's net worth on the web.