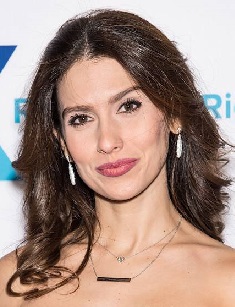 Everyone who is keen on yoga has ever heard about Hilaria Baldwin (Thomas). She is a Spanish entrepreneur, actress, writer of the popular books, 'The Living Clearly Method: 5 Principles for a Fit Body, Healthy Mind And Joyful Life,' and co-founder of Yoga Vida. Hilaria is married to the famous actor Alec Baldwin.

The woman was born in Majorca, Spain, on January 6, 1984. Her original name is Hilaria Lynn Thomas. From the infancy, she was interested in dancing (flamenco, ballet), gymnastics and sport. When she was 5, she became a vegetarian. At the age of 13, Hilaria got started in international Latin ballroom dancing and competed in a dance around the world.

Later Hilaria got to know yoga.

She graduated from New York University with a degree in art history and dance.

Also, she starred in such works as Today, Entertainment Tonight, Good Day New York, Live with Regis and Kathie Lee, The View and The Talk. On every show, she acted her herself.

Except for playing in movies, Hilaria is a businesswoman. So, she co-founded Yoga Vida. She works there not only for money but also because the sport is her lifestyle.

In 2016 Hilaria published her book "The Living Clearly Method: 5 Principles for a Fit Body, Healthy Mind & Joyful Life". In work, she told about her struggles with health and pressure, shared which diets she keeps.

Also, she wrote that earlier she had suffered anorexia and bulimia. Readers find the essential questions in this book: how to find peace in this world? How to stop worrying? How to live happily? The book has received many positive reviews.

In the book, she advises people to take up yoga – this kind of sport has helped many people find themselves, understand who they are. There she also shares her favorite yoga poses.

Besides, Hilaria does some charity work: she joined eBay for a charity to help raise money for the organization 'Bent On Learning,' a non-profit organization that promotes yoga among New York City public school students.

Baldwin likes to take the ritual of bathing which we all have to do anyway and make it the chance to recharge herself. Also, the woman is a good cook – she often publishes her culinary masterpieces and their recipes on Instagram.

The actress often communicates with fans in Social Media. She uses Twitter and Instagram where shows that her life is not ideal like many people consider. This feature distinguishes her from other stars: unlike them, she does not strive to show luxurious attributes but introduces her routine to interested fans.

Hilaria's net worth is $10 million.

Although Alec Baldwin is her first husband, for him their marriage is the second. So, in 1990 the actor married Kim Basinger. In 1995 the wife gave birth to their daughter Ireland Baldwin. By the way, being married to her, the man found a lover Nicole – a professional lawyer, but she left the partner in 2009. According to Alec, he lost his love for Kim because of frequent scandals and misunderstanding. The only thing which stopped him from divorce was their child. However, the spouses ended up being different people and decided to break up in 2002.

Several years later he met Hilaria who also was single. On April 2, 2012, he proposed the woman marry him. Two months before The Cannes Festival where the actor would perform they went on a trip to Europe. Hilaria met another side of her husband's life – world capitals, hotels, private jets... In Cannes journalists literally spied on them, and the world knew about their wedding from the magazines' highlights.

Now they have four children, except Ireland: daughter Carmen was born in 2013, son Rafael was born in 2015 and their second son, Leonardo Angel Charles was born one year later - in 2016 and the youngest child Romeo was born in 2017.

In the interview with InStyle, Hilaria told about her first kid – daughter Carmen. According to her, she is more girlier than her mother is: she likes princesses, crowns, lipstick and pink things.

At the beginning of April, 2019 the spouses announced Hilaria's pregnancy. Unfortunately, on April 9, the parents visited doctors, did an ultrasound and later it was stated that they had lost the baby – miscarriage occurred.

Hilaria Baldwin is bilingual and strives to bring up bilingual kids. She speaks both Spanish and English to them.

The woman admits that when people hear her speaking Spanish, they propose her working as a tutor. In response to it, she says that if she were not so busy with her own children, she would work with joy.

Hilaria pays a lot of attention to her native language that the first language of her eldest child Carmen is Spanish. Hilaria's husband is not fluent in it, but due to her learns new words every day.

When journalists asked the spouses about how they cope with daily routine and don't lose love for each other, Hilaria answered that the secret of their happy life was keeping young souls inside. Of course, Hilaria is not already young, she is a mother and has to do chores, feed the children and do homework with them. But she understands how essential it is to be a young girlfriend for the husband, to surprise him. All these things are the integral attributes of a happy marriage.

When they met, Alec was not the healthiest person: he ate fast food, didn't have a regimen. Hilaria changed his harm habits and improved his health.

"I met him 7 years ago today...and how our lives have changed. 5.5 years of marriage, almost 4 kids...we have had a wonderful time and our moments too. One thing that helps us grow together is that we make it a priority to have our alone time. Children are such a blessing, but they can strain relationships too...taking time, nearly every day, to check in and laugh...yes, get angry and cry and frustrated too-helps us stay together. It is no fairy tale and it isn’t easy...but it’s real and it’s us. Most importantly: never to lose our sense of humor."

By the way, Alec just interjected:

"I realize, at the end of the day, Hilaria is usually right.” Me: that helps too: honesty?￰ﾟWhat are your tricks to sticking together?"