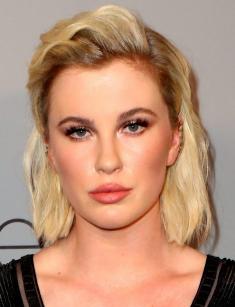 Ireland Baldwin was lucky to be born in the star family of Kim Basinger and Alec Baldwin. The girl inherited from the mother her beauty and a penchant for outrageous lifestyle, and from her father she got a cantankerous character and basketball height of 6'0'' (188 cm) with a weight of 143 lbs (65 kg).

Ireland's childhood was happy, but it was not without pitfalls. Paraphrasing the saying the rich are not always happy, we can say that a child in a star family had her own difficulties. Paparazzi have followed her since childhood. So, the girl appeared on covers of tabloids for the first time in 2007 after her father left her an angry voicemail message, which became publicized.

He called her "a thoughtless little pig". Tabloids were happy to use this as a material. It was later revealed that outburst was the fact that the father couldn't reach her daughter. But this was a reason for Ireland to be offended for a long time. However, the conflict had been exhausted. The oldest daughter of the Baldwins had good relations with younger children from the second marriage.

However, she couldn't keep her head cool. One day during the filming of the TV show dedicated to Alec Baldwin, which, in addition to numerous family members, was attended by other celebrities, including Bill Clinton, the girl came on stage and gave a shrill speech.

"Hello, my name is Ireland, and I'm a Baldwin. Yes, I'm a member of that family. I see other recovering Baldwins here. Some cousins, uncles … I'm here to roast this big old ham I call my father. Speaking of pigs, some of you may remember me like that ‘thoughtless little pig' you read about. That was a decade ago, and my dad and I are in a much better place now. He won't say anything like that, because I'm six feet tall and I can kick his ass."

And then the girl turned to her father and admitted:

"I know you've heard this and time again, but I really am proud to be your daughter, and I'm so happy to be here tonight. And I absolutely love and adore you."

Ireland had been dreaming of becoming a model since adolescence to find their own name and not just stay a star child in the shadow of famous parents. At the same time, she was well aware that, despite her inherited beauty, she didn't have a model appearance. The young woman even struggled with complexes about it when she got criticizing comments on Instagram.

However, in 2013 the trump card fell out. The famous fashion photographer Patrick Demarchelier, who is considered a legend of photography in the fashion industry, took portraits of an aspiring model. The photos were published by Vanity Fair magazine. Then she took part in a photo shoot for the edition of V Magazine.

In 2014, the girl first came to the podium during the show of Donna Karan collection. At the same time, Ireland became the face of the new Sisley collection. The advertising campaign was shocking. Aside from Ireland, two more models participated in the photo shoot. According to the scenario, young people depicted a love triangle.

2014 was productive for Ireland. Then there were two more events, a photo shoot for the fashion brand Rampage, which at that time was an event that gave a good start to further professional growth. The model was invited to Moscow by the Russian edition of Vogue, and she participated in a photo shoot and gave an interview.

Ireland Baldwin signed the first contract with the Agency IMG Models at the age of 17. At the same time, the public saw Ireland's first professional photos in the New York Post magazine. The model is not afraid to shoot naked and often participates in photo shoots in a teasing swimsuit. At the same time, she admitted that she had problems with anorexia. According to her, it was caused by harassment in social networks about a non-standard figure for the model.

Ireland Baldwin's filmography contains a few movies. The first and only film the model appeared in was the movie Grudge Match of 2013. The aspiring actress starred with Kim Basinger as a young Sally rose-the heroine of her mother in her youth.

The movie is focused on both sports drama and love melodrama. Briefly about the plot: two old boxers in 30 years after the end of career were invited to carry out the last fight, but it became clear that the competition goes out of a ring. The movie was premiered on December 25, 2013, and grossed $2 827 113.

The young model has much of personal life. At the age of 18, she had an affair with a professional surfer Slater Trout, but in 2014, on the initiative of the girl, the couple broke up. Then the model was in a relationship with a rap singer Angel Haze, but they broke up a year later. So if someone is interested in the sexual orientation of Ireland, she says honestly that she hasn't made up her mind yet.

In 2018, the ubiquitous paparazzi managed to find out the name of the new Ireland's boyfriend and even captured her sitting in the first row at a concert in California. It is a musician Corey Harper, singing in rock and country style.

There are some rumors that having an affair with a musician, the model followed in the footsteps of her cousin, Hailey Baldwin (Stephen Baldwin's daughter). She became the wife of a Canadian musician Justin Bieber in the autumn of 2018. Ireland will be a bridesmaid at the official celebration will be held at the beginning of 2019.

It's known that Ireland got fond of tattoos. And the body of the model resembles an art gallery in the fusion style. There is a portrait of David Bowie, a color composition of flowers, an arrow, a picture in the style of Hello Kitty and a skeleton on the left hand. By the way, the last image is accompanied by the name of the Destroyers' Bad to the Bone which was extremely popular in the early 1980s.

The career of the model continues to develop rapidly. There are long-term contracts with two model agencies have been signed. The first one is with the International Modeling Group, and the second one is with Two Management.

At the age of 22, a dream come true: the girl became a participant of PETA animal protection campaign, which is held under the motto "I'd Rather Go Naked Than Wear Fur". Ireland is a committed animal rights activist. Her agents have added a mandatory clause in the contracts that the model will not wear clothes made of animal fur.

Ireland shot naked for the PETA campaign, just as Kim Basinger did it three decades ago. In childhood, Kim's daughter saw these photos and she wanted to repeat such an act one day. At the same time, Ireland still doesn't like comparisons with her famous mother. They are really different. The girl is still haunted by the paparazzi, which spoils the mood a lot. But now the paparazzi follow her, the famous model, not the daughter of star parents. It may be small comfort to some, but it's certainly not for Ireland Baldwin.