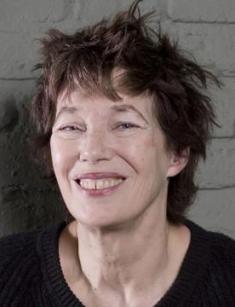 Jane Birkin is a famous English-French actress. She has become popular for her long-lasting creative and personal union with Serge Gainsbourg. In the seventies, hippies considered Jane their sex-symbol.

The future actress and singer was born in winter, on the 14th of December of 1946, in London. The father of the girl, David Birkin, was a navy officer and the hero of World War II. The mother of the girl, Judy Campbell, was a movie and musical artist. In their family, the parents already grew up their elder son Andrew. With time Jane 's brother became a director and writer. After a while, another daughter called Linda was born in the family.

Birkin’s house was situated in the prestigious district of Chelsea. In their family they had enough money: her parents could afford to buy themselves and their children luxury things, and during holidays they sent children on travels.

During the sixties of the previous century, London became the center of the arts. Such event wasn’t unnoticed by the perky girl, and already at the age of sixteen she gave up her studies at the school and set off on conquering the world of cinematography.

The beautiful young girl visited castings and tried herself for the roles. The destiny smiled to the future star, and she was lucky: at the age of seventeen, she had her debut on the theater stage in the play under the title "Carving a Statue." During this period of time, an important event happened in the biography of the young actress. John Barry, who was thirteen years elder than Jane, appeared in the girl’s life. John became popular as he wrote music to the famous "Bondiana" and later won five Academic Awards.

The next achievement of the actress in her career was the role in Barry 's musical under the title The Passion Flower Hotel. Though Jane Birkin desired something more than the roles in the theater, and she focused on the movie industry. She first appeared on the screen in 1965. The girl took part in the movie The Knack ...and How to Get It directed by Richard Lester.

In 1966, the actress received an offer to appear naked in the episode of the movie Blowup directed by Michelangelo Antonioni. The actress agreed and appeared naked on the screen, what caused the public resonance. In 1967, the movie received the award of the Golden Palm Branch.

After a year, the newly-made star went to France to take part in the audition for the movie Slogan directed by Pierre Grimble. Jane managed to interest the director, even though she didn't know French, language, and she received the role. Already famous singer and musician Serge Gainsbourg became her partner on the movie set. They began to feel an attraction to each other, which later resulted in the passionate love affair.

In 1969, the couple appeared together on the screen in two more movies. Later Jane took part in the movie The Pool, directed by Jacques Deray. Although Gainsbourg was writing many songs for his new muse, she dedicated herself to cinematography. In 1973, the actress played a role in one more movie with the ex-girlfriend of Serge Gainsbourg - Brigitte Bardot. The women shot in the movie of Bardot 's ex-husband under the title Don Juan, or If Don Juan Were a Woman.

The ridiculous couple of Jane Birkin and Pierre Richard earned the audience’s love. The beauty Jane and ludicrous Pierre looked as they were in harmony in the comedies. The following movies – Lucky Pierre and La Course à l'échalote collected crowds of people at the premiere.

In her filmography, the actress had two movies, which were shot on the detectives written by Agatha Christie. In the first movie under the title Death on the Nile, which was released in 1978, the actress performed the role of the maid. But in the second movie released in 1981, Jane already received the role of the central character. After she had broken up the relations with Gainsbourg, she received the role in the serious drama movie Preacher’s Kid.

In the eighties, Jane appeared in the comedies Circulez y' a rien à voir, Pirate, and Kung-fu master!. In the middle of eighties, she began to appear in French movies. Both critics and viewers were delighted.

Serge Gainsbourg died in 1991. At the same period of time, the actress has realized her old dream - she played in the musical. Jane dedicated her performance to the memory of Gainsbourg.

As a result, the scandal burst out. The Vatican officially announced that the song was immoral, and the radio stations didn’t’ agree to broadcast the composition. Though this scandalous story has only interested the public: during next months, there were sold several million of the copies of the single, and the song was at the top of the hit charts.

Jane and Serge's relations came to an end in 1980, but they continued their musical cooperation. In 1983, the musician composed a new album for the singer under the title ‘’Baby Alone in Babylone.’’ This album is considered to be the best one in Jane’s musical career. In 1985 Serge composed a duet song for Birkin with their daughter Charlotte.

During the late eighties, the singer gave solo concerts. Her debut concert took place in the hall of Le Bataclan former Paris music hall. At that time the artist was already forty. But, due to her natural talent and charm, the woman found an emotional contact with the spectators in a short time. That’s why the singer began to have a busy performance schedule quickly. Her best songs were released in the albums.

In 1994 the artist gave a concert in London. The show was dedicated to Serge Gainsbourg. At that time it was an adult woman, who appeared in front of the admirers, but not a scandalous popular person.

In 1996 the singer recorded a mash-up of Gainsbourg’s songs under the title ‘'Version Jane'', with which she went on a European tour. In 1998 she released a long-play ‘’A la Legere’’.

In 2004 Jane presented a new compilation of the songs, which were composed for her by the musicians from all over the world. The compositions were collected in the album ‘’Rendez-Vous’’.

At the age of nineteen, Jane married the composer John Barry. In this marriage, their daughter Kate was born, who later became a photographer and actress. Three years later, their marriage came to an end.

In 1969 Birkin got acquainted with Serge Gainsbourg. In 1971 she gave birth to their daughter Charlotte. The girl became an actress and singer. The union with Serge lasted for twelve years. They were considered to be the most scandalous and stylish couple of the previous century.

Jane got acquainted with the director Jacques Dilon in a short time before the break up with Serge. They got married, and in 1982 the woman gave birth to her third daughter Lou, who later also became an actress.

In 2004 Jane was awarded French Order of Merit. Hermès trademark called the bag in honor of the artist.

In 2013 a tragedy happened in the artist's life. Her elder daughter Kate committed suicide and jumped out of the window from the 4th floor.

At present, the former fashion icon brings up four grandchildren and continues to be engaged in creative activities. She went to Bosnia and shot the movie about the Filipino political prisoner. She took part in the campaigns against AIDs.

Birkin lives in the house in the French province, but she likes to spend most of her free time in Paris.

At present, Birkin’s net worth is about $20 million.