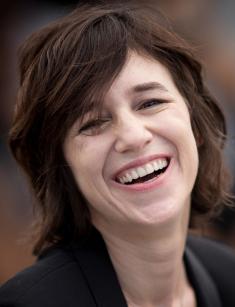 Charlotte Gainsbourg is of English, French and Jewish descent. She was born on July 21, 1971, in the capital of the United Kingdom. The future actress grew up in an artistic family, so Charlotte learned the love for creativity at mother's knees.

Her parents had first-hand knowledge of show business. Mother Jane Birkin is a stage and screen actress, as well as a famous singer who met her future husband, Serge Gainsbourg, during the filming of Slogan.

Serge was a man of many talents, and he was capable of doing several things at once like Julius Caesar. The man played on the theater stage, acted in films and directed movies, wrote outstanding scripts, and created melodic songs.

By the way, Serge and Jane became the youngest star couple in France, and in 1969 they released a scandalous song “Je t’aime ... moi non plus” (the Pope criticized this single), performed with Brigitte Bardot.

So, Charlotte was born at the height of her parents' fame and tasted the fruits of success. However, 12 years after the marriage, Gainsbourg and Birkin decided to separate, and the press began to write about their emotionally turbulent divorce. Jane left her husband for director Jacques Doillon, and Serge began to abuse alcohol.

Therefore, the parents had no time for the little daughter, who originally spoke French, then learned English. It is known that the actress has stepsisters: Kate Barry (from the mother’s previous marriage) and Lou Doillon.

Charlotte made her acting debut in the 1984 French musical melodrama Paroles et musique, which told about the family tragedy of creative people. Although Charlotte did not play a significant role, she was lucky to work on the same set with such outstanding actors as Catherine Deneuve, Richard Anconina, Christopher Lambert, Nick Mancuso and other stars of show business.

Charlotte also participated in the eccentric music video of for her father’s song "Lemon Incest" and attracted people’s attention. In 1985, Charlotte landed the leading role in the French film An Impudent Girl (French: L'Effrontée) directed by Claude Miller.

The film revolves around 13-year-old Charlotte Castang who faces the difficulties of the transition period. It is noteworthy that the novice actress won the Award for Most Promising Actress. Bernadette Lafont and Jean-Claude Brialy also joined the brilliant cast of An Impudent Girl.

In 1996, Charlotte was lucky to play in the drama based on Charlotte Brontë’s novel "Jane Eyre." Gainsbourg got the leading role of Jane who had a difficult fate but a kind heart. In addition to Charlotte, the film featured William Hurt, Maria Schneider, Billie Whitelaw, Joan Plowright, and other stars.

At the beginning of the new century, the talented actress appeared in the film Les Misérables (2000), which was directed by Josée Dayan and based on the novel by Victor Hugo. This drama shows the life of an ordinary man, Jean Valjean, who was sentenced to 20 years in prison for stealing a loaf of bread. Charlotte’s colleagues on the set were Gérard Depardieu, Christian Clavier, John Malkovich, Asia Argento, and Virginie Ledoyen.

In 2000, Charlotte also took part in the movie La Bûche, for which she won the prestigious César Award for Best Supporting Actress. A year later, Gainsbourg played in Yvan Attal’s comedy melodrama My Wife is an Actress.

This film is highly biographic and shows the typical problems of a man and a woman. In 2004, she also appeared in Attal’s film Happily Ever After. This time she worked on the set with Johnny Depp and Alain Chabat.

A year later, Charlotte Gainsbourg appeared in the psychological thriller Lemming. The film tells about the exemplary couple who moved to a new city. Alain (Laurent Lucas) and Bénédicte invite to dinner the new chief Richard (André Dussollier) and his wife Alice (Charlotte Rampling). But they could not have imagined that this seemingly pleasant evening would cause troubles.

In 2006, Charlotte was offered to play the title character again. This time it was the romantic comedy The Science of Sleep, and in 2009 she took part in the blood-chilling horror film Antichrist. Charlotte Gainsbourg and Willem Dafoe performed the leading roles, although Eva Green was initially cast for the project. At first, the actors doubt the success of the gloomy film which was filled with sex scenes, but Charlotte took a risk and included in her credentials the prestigious Bodil Awards.

“If you delete sex scenes from the film, you will see the tragic story of a confused person. And I like such difficult tasks. I have never regretted the roles I’ve played” Charlotte Gainsbourg said in an interview.

Despite such an eccentric plot of the film for adults, it received rave reviews from critics, and Charlotte won the award for the best actress again. In 2013, Gainsbourg also released a cover version of the song "Hey Joe" for the soundtrack of the film Nymphomaniac.

Charlotte Gainsbourg is a kind and sympathetic person who has had both good and dark days in her life. For example, it is known that in 2007, Charlotte was injured in an incident while water skiing.

The woman did not attach special importance to this incident, but then she had severe headache pain. It turned out that Charlotte had intracerebral bleeding, and she got admitted in the hospital where the actress underwent an emergency brain surgery.

As for her romantic relations, Charlotte is a longtime partner of Yvan Attal. The lovers have three children: Ben, Alice, and Joe. Unfortunately, the talented actress did not register an official page on Instagram, so fans can rarely find the happy photos of Charlotte with her husband and children.

Charlotte continues to delight film fans with participation in movies, and 2017 was very fruitful for the actress. She appeared in the projects Ismael's Ghosts and The Snowman.

Among other things, Gainsbourg will take part in the film Promise at Dawn, which is scheduled to premiere in December 2017. Didier Bourdon, Jean-Pierre Darroussin and Finnegan Oldfield will also perform the leading roles.

In September 2017, Gainsbourg released and directed music videos for the singles "Rest" and "Deadly Valentine."

The same year, Nars created a makeup collection in collaboration with Charlotte Gainsbourg, who also starred in the brand’s summer 2017 campaign.

Charlotte Gainsbourg has a net worth of $8 million.