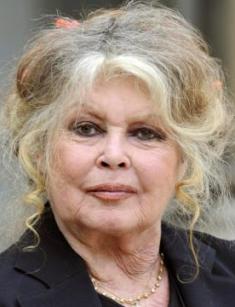 Brigitte Bardot is a French actress, singer and social activist. Brigitte Anne-Marie Bardot was born in Paris in September 1934. The father of the future movie star ran a business, and her mother was a housewife and raised two daughters. One day, when the family of little Brigitte went to a restaurant, a fortune teller walked up to them and predicted that their family name, Bardot, would be world famous. Her father decided that he would be a lucky businessman.

It is difficult to believe that Brigitte was called ugly duckling in childhood, and the girl did not consider herself to be beautiful. At that time the actress wore special glasses, as well as metal braces to correct the bite, suffered from strabismus, and had a dull chestnut hair color. But the girl has always been proud of her figure.

The future celebrity and her sister attended dance lessons. The parents noticed their daughter's inclination and enrolled the girl in a ballet school. At the age of 13, Brigitte went to study at Conservatoire de Paris, passing a serious test. There, the girl was lucky to attend ballet classes held by Russian choreographer Boris Knyazev.

Soon the ugly duckling disappeared. Brigitte became beautiful, and it was difficult not to notice such an attractive woman. They began to offer Bardot to shoot in fashion magazines. In 1949, she already posed for Jardin des Modes, and the following year her photos appeared on the cover of Elle. Then Brigitte was noticed by director Roger Vadim who persuaded his colleague Marc Allégret to invite the woman to auditions.

Brigitte Bardot made her movie debut in 1952, and the aspiring actress took part in the shooting of the comedy Le Trou Normand. Over the following four years, the young actress managed to appear in 17 films, including The Long Teeth, Manina, the Girl in the Bikini, School for Love, Doctor at Sea, Caroline and the Rebels, The Grand Maneuver, Nero's Weekend.

Soon Brigitte became famous for the role in the film And God Created Woman (1956). It is considered the first successful film in the actress’s career. The movie caused a stir in society, and it was condemned by the Catholic Church for excessive frankness. Despite this, the scene that depicts nude Brigitte Bardot dancing on the table made the actress a worldwide star. Besides, the film is considered to be one of the conditions that influenced the sexual revolution. After the role in the film And God Created Woman, the directors began to invite Bardot to their projects, and the actress became the sex symbol of the era.

Since the late 50s, the French woman began to participate in more serious films. Bardot actively worked with prominent representatives of world cinema.

In 1959, she became famous for her role in the movie Babette Goes to War. This movie would be called the most popular in the career of the French actress. The action of the comedy takes place in France, occupied by the fascists. Later, Brigitte’s hairstyle in that film was extremely popular with women. The haircut was even called the Babette.

A year later, Gainsbourg recorded this song with actress Jane Birkin. As a result, the single became a hit, and Birkin gained popularity. Only in 1986, the original song with Brigitte Bardot was released, but the composition did not spark interest.

Brigitte Bardot has been repeatedly involved in political scandals. Bernard d'Ormale, the husband of Brigitte, served as an adviser of the leader of the far-right party National Front, and Bardot often expressed her nationalist beliefs. The actress has publicly stated that she does not sympathize with political parties at all. Nevertheless, Bardot has been condemned for inciting racial hostility.

Brigitte Bardot often says that she doesn’t like the government policy due to an "Islamicization of France." According to the actress, they impose the culture and lifestyle of the Muslims in France, which gradually destroys the identity of the French people.

In 1973, Bardot announced that she was quitting an acting career. At the same time, the actress did not live a solitary way of life, but decided to devote her life to caring for animals. The actress’s love for animals has always amazed others, and her statements surprised the world community. Bardot urged to abandon the use of horse meat once and for all, condemned the deer hunt, which took place in Canada. In 1999, she was not afraid of writing a letter to the Chinese President, in which she accused the Chinese of killing the world's last rhinoceros and tigers to make aphrodisiacs.

On her 75th birthday, the actress asked Italian actress Sophia Loren to present the world an unusual gift, to give up natural fur. Fans still remember Bardot’s statement about women who wear such clothes.

“Fur coat is a cemetery. A real woman will not wear a cemetery on her back,” Brigitte Bardot said in an interview.

Nowadays, the actress lives in a villa in Saint-Tropez and has few hundreds of pets.

Bardot has always attracted the attention of men because the actress has an attractive appearance. The French actress is 5.57 ft. (170 cm) tall, and she weighed 123.45 lbs. (56 kg) at the peak of popularity. The woman has had a lot of love affairs.

Brigitte was only 16 years old when she began a relationship with Roger Vadim. The young woman went crazy for the man, as evident by her reckless behavior. The parents disapproved of the daughter’s choice, so the aspiring actress attempted suicide several times to protest. At the age of 18, Brigitte married Vadim.

The first marriage broke up in 1957. The actress soon had a new boyfriend, Jean-Louis Trintignant, her partner on the set of the significant film for Bardot. The lovers began to live together, but their relationship lasted only two years.

After the breakup with Trintignant, Brigitte Bardot soon married again. This time her husband was Jacques Charrier, and a year later the actress gave birth to their son Nicolas. It was followed by a divorce and numerous love affairs. Brigitte had a relationship with Sacha Distel, Serge Gainsbourg, and Bob Zagury.

Brigitte Bardot’s third husband was the millionaire photographer, Gunter Sachs. The marriage lasted three years. Sachs was a famous photographer whose works were published in prestigious magazines around the world. Besides, the man was a renowned contemporary art collector. Reliable sources have repeatedly reported that American artist Andy Warhol gained worldwide fame thanks to the efforts of the photographer.

At the age of 58, the actress decided to marry again. She and Bernard d'Ormale celebrated the wedding in 1992. A few years later, Brigitte divorced him.

The actress became the first woman in Europe who dared to appear on the screen in a bikini. In everyday life and movies, Brigitte prefers the chic Saint Tropez style. It contributed to the popularity of the resort town of Saint-Tropez.

In 2017, during the presidential elections in France, Brigitte Bardot called on all those who love animals to vote against the former Minister of Economy and Finance, Emmanuel Macron.

According to Bardot, “'If Macron wins, animals die! The plans Mr. Macron has for animals is mortifying, scandalous, desperate, and without any improvement in any field.”

The celebrity claims that the leader of the political party, En marche, lobbies the interests of large companies, sides with breeders and hunters.

"The contempt he gives to animal suffering can be seen in the total lack of empathy reflected in the coldness of his steel eyes," Bardot wrote in a letter posted on the actress’s official Twitter account.

In January 2017, a new documentary film about Brigitte Bardot was released in France. The outstanding director of the biographical movies, Virginie Linhart, created this movie. The project Brigitte Bardot - Amoureuse was based on the films and television programs with the participation of the actress. Viewers also saw home videos made by the father of the famous French woman.

In August 2016, it became known that the castle where Brigitte Bardot stayed was put up for sale. French media reported that it was the estate Le Castellet. Experts estimated the property on the Cote d'Azur at $ 5.6 million.

It is known that the actress stayed in this house after a divorce from her first husband. According to rumors, Bardot even wanted to buy the estate, but then changed her mind and bought a property in Saint-Tropez.

It is assumed that the estate was erected in the XIII century. The house, which looks like a castle, has eight bedrooms, high ceilings, and a fireplace that dates back to the era of Louis XIV. Besides, several pools, an olive grove, and a vineyard are located on the territory of the mansion.

Brigitte Bardot has a net worth of $65 million.