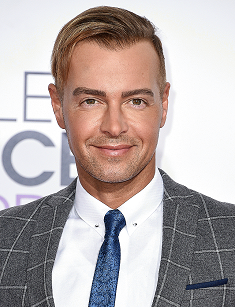 Joseph Lawrence Jr. is a famous American actor and musician. He started his career as a kid – at the beginning of the 1980s and came to prominence after starring in the movie Blossom as Joey Russo. Amongst the works he took part in, there is the series Brotherly Love – Lawrence appeared there with his brothers Matthew and Andrew, and with the popular actress Nell Carter.

Joey’s birthplace is Abington, Pennsylvania, the United States. He was born there on April 20, 1976, to the family of Donna, a personnel manager, and former elementary school teacher and Joseph Lawrence Mignogna, an insurance broker. When Joey was a child, his family moved to Philadelphia. Lawrence has some Italian roots. Besides him, there are two more kids in the family - Matt and Andy, who are also actors.

Lawrence was named after his father, Joseph Lawrence Micnogna, who worked as an insurance broker while his children were growing up.

However, when Lawrence first started to break into the acting business, getting his first TV role on a Cracker Jack commercial when he was just a few years old, he dropped his original surname and took on Lawrence as his official last name. His younger brothers followed suit when they joined him in Hollywood.

Joey studied at Abington Friends School in Jenkintown, Pennsylvania from which he graduated in 1994. Later the young star entered the University of Southern California.

In an interview, Joey once mentioned music has always been his passion. He started working on music as a teenager. So, at the age of 16, he released his first album «Joey Lawrence» (1993.) Steve Barri, Tony Peluso, Terry Lupton, and Ian Prince helped with its production. Lawrence co-wrote some material, including the international hit single «Nothin’ My Love Can’t Fix» (#6 Billboard Hot 100 Airplay, #10 Billboard Top 40 Mainstream, #19 Billboard Hot 100, #13 United Kingdom, #68 Australia). The movie Cop and a Half used this track as the end-title theme. The collection also included "Stay Forever" (Outside My Window).

He was invited to perform on MTV’s Spring Break, The Arsenio Hall Show, and the UK’s Top of the Pops in 1993.

In Summer 2011, Lawrence pleased his fans by releasing singles «Rolled» and «Give It to Ya (Acoustic)» via Pledge Music. In 2017 the musician created a band Still 3. Its members are he himself, Matt and Andy. They released their debut single «Lose Myself.»

Lawrence’s first acting role was a Cracker Jack commercial. As a 5-year-old child, he was invited to The Tonight Show Starring Johnny Carson, where he performed with the song «Give My Regards to Broadway.»

He turned to television shortly after, taking guest spots on popular sitcoms like Diff’rent Strokes and Silver Spoons before landing the role of Joey Donovan on NBC’s Gimme a Break! The series ran from 1983 to 1987 and made Lawrence a popular child actor. He worked there till the show was closed. After Gimme a Break! ended, he provided the voice of Oliver in the 1988 Disney film Oliver & Company. The film was well-received by critics and earned over $74 million at the box office.

Lawrence transitioned from child star to teen heartthrob with the NBC sitcom Blossom. He played ladies’ man Joey Russo on the series from 1991 to 1995 and became a pop culture icon through his character’s «Whoa!» catchphrase. At its peak, Blossom averaged 12 million viewers per episode. Joey’s jokes made him an endearing part of 90’s pop culture, and people still yell «Whoa!» when they pass Lawrence in public.

When the series ended, Lawrence starred in the NBC sitcom Brotherly Love opposite real-life brothers, Matthew, and Adam Lawrence. Brotherly Love was canceled after two seasons.

The star worked in Run of the House and starred on such programs as American Dreams, Hawaii Five-0, The Karate Kid and CSI: NY. One of Lawrence’s movie credits is Urban Legends: Final Cut (2000).

Lawrence returned to TV, after a string of guest-star appearances, in 2006 when he competed on Dancing With the Stars. Lawrence was paired with professional dancer Edyta Śliwińska. In an interview about his stint on the reality competition show, Lawrence said, «It was a great time.» He finished in third place and then took a turn on Broadway, starring as Billy Flynn in Chicago in 2007.

In 2009 Lawrence made an appearance in the television movie My Fake Fiancé with Melissa Joan Hart, which premiered on ABC Family to 3.6 million viewers. The work became the most-watched television movie of the ratings season. In Summer 2010 he got the role in the ABC Family sitcom Melissa & Joey and worked there alongside Hart again. She acted as a woman who hires Lawrence as a nanny to help care for her incarcerated sister’s kids.

Joey’s character was a former figure in the financial industry whose company came under investigation for wrongdoing and caused his professional life to be put on hold. After starring in the movie, Lawrence became some kind of a sex-symbol: the scenes where he was shirtless drove the fans crazy and showed how hard the actor worked out.

Melissa & Joey earned multiple award nominations during its run, including three consecutive nominations for Favorite Cable TV Comedy by the People’s Choice Awards. That time Lawrence had an annual salary of $534K during his time on the series.

In 2012 Joey signed a contract as a dancer for a special engagement in June at the Rio All-Suite Hotel and Casino in Las Vegas.

In 2019 Lawrence appeared in Celebrity Big Brother. In a recent interview, Lawrence said of Big Brother,

«I’m not sure I can win the show… I don’t have a strategy. I’m not very familiar with it.» Joey reportedly describes himself as a «reactive guy» who is «pliable to the situation.»

This year Joey also applied for the casting for acting as batman in The Batman. However, now there is no precise information about who exactly will play the character.

Joey’s middle brother Matthew (Cheryl Burke’s boyfriend) also got an early start in showbiz, appearing as Danny Carrington in Dynasty in the mid-1980s. He was then cast as one of Robin Williams’ children in Mrs. Doubtfire before playing the younger version of his brother Joey’s character on Blossom.

Today, Matthew is best known for his role as Jack Hunter on Boy Meets World. He appeared on the show, part of the late 90’s TGIF lineup, for three years until it ended in 2000.

Andrew, the youngest Lawrence brother, was born on January 12, 1988. He did a handful of on-screen work, even working with his brothers on the TV series Brotherly Love, before settling into a career in voice work. His earliest credits include the Disney animated series Recess, where he voiced playground leader T.J. Detwiler, as well as several video games.

Lawrence married Michelle Vella in 2002; the couple divorced in 2005.

Joey met his second wife on vacation in Disney World when the two were teenagers. He then married and divorced from Michelle Vella, before reconnecting with Chandie Yawn-Nelson.

He shared with journalist how he proposed to Chandie. He said the proposal was after he found her again and they got back together. They were driving in a car. They hadn’t seen each other in four and a half years, and Joey flew into San Antonio to meet her, to see if the feelings were still there, and they were. When they were sitting in the car, literally, he didn’t even plan it. According to him, they looked at each other in the car, and she started crying. Lawrence said, «Let’s just do this,» and Chandie said, «OK.» So, they set a date, and a year later they got married.

Despite Lawrence’s lengthy career as an entertainer, he has run into some legal trouble. He recently filed for bankruptcy, and, according to the site Behind the Voice Actors, currently has an estimated net worth of $400K.

In addition to his owed back taxes, Lawrence owed Capital One an estimated $30,991, American Express an estimated $48,506, Ford Motor Company an estimated $42,000 and Daimel Trust a whopping. $130,000. Lawrence’s bankruptcy was eventually settled in August 2018.