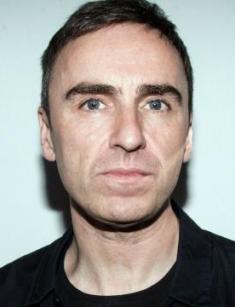 The Belgian designer Raf Simons is one of the iconic fashion figures today. He is called the most influential minimalist who has rediscovered slim-fitted men’s suits, polo necks, pipe pants, and maxi skirts for fashion lovers.

Experts are always interested in his new collections: everybody expects new mind-blowing ideas in clothes and footwear. In 2008, The New York Times called Simons, arguably, “most important men’s wear designer in the world”.

The future designer was born into an ordinary family living in a small Belgian town, Neerpelt. It happened on January 12, 1968. The father, Jacques Simons, was a military man, and the mother, Alda Beckers, kept the house.

In 1991, the young man graduated from a Genk college, School of Industrial Design and Furniture Design, and worked in local galleries for some time. According to Raf, his country had three national treasures: diamonds, chocolate, and fashion; he chose what seemed most exciting.

The member of the famous Antwerp Six, Walter Van Beirendonck, provided the young designer with an internship in his studio.

Simons used to view the fashion industry as something glamorous and showed little interest. However, his opinion changed when Van Beirendonck invited him to Martin Margiela’s all-white show: the young man was so impressed that he decided to design clothes.

The early period was marked with useful networking. Raf met the designer Veronique Branquinho, the stylist Olivier Rizzo, and the photographer Willy Vanderperre in the Antwerp bohemian café Witzli-Poetzli; the new acquaintances helped him launch the personal brand.

In 2000, the designer took a break in his career and closed the company, but the Belgian company Gysemans Clothing Industry offered Simons to work on its production technology the next year, and the brand Raf Simons reopened. The same year, the man became a curator at the University of Applied Arts Vienna; he spent five years there.

In 2003, the little-known designer won the prestigious Swiss Textiles Award; critics immediately noticed the new name and started watching him.

2005 turned over a new leaf in the designer’s career: he launched the second line of the brand Raf by Raf Simons. The book about Simons and his ten-year work was released; he also became a creative director at Jil Sander for seven fruitful years.

At the same time, Raf contributed to capsule collections for other brands: he introduced a glasses line for Linda Farrow, bags and backpacks for Eastpack, and sports shoes for Аdidas.

The collaboration of Raf Simons and Adidas was particularly interesting: they presented a limited edition of sneakers with cut-out holes. Clients could also purchase three pairs of matching socks with various prints.

In 2012, Simons took the position of the creative director for Dior’s women’s line instead of John Galliano. Soon, the designer was accused of racism: only white models participated in his runways.

Three years later, Raf left the job: he wanted to develop his own brand more thoroughly. He also mentioned some other non-working reasons that led to his decision.

In summer 2016, the Belgian designer began to work as a new Calvin Klein designer and creative director. In November 2018, the media reported the conflict between the company’s administration and Simons: the expenditures were too high, and its cover was not satisfactory. In December, Raf Simons left the Calvin Klein.

In January 2019, the designer appeared in Paris and presented his new men’s collection; critics emphasized it was optimistic and attractive.

Raf has a personal Instagram page and often shares photos and videos with models. He continues to follow his style: long coats, jackets, and big boots. Coats and sweaters are accompanied by screenshots from David Lynch’s Blue Velvet.

The designer does not talk about his personal life much. He has a big house in New York and collects paintings. Raf’s parents often visit his shows.

Secrecy encourages people to spread rumors; some media claim that Simons is gay. However, there is no information about men or women he dated. Raf has many friends: the artist Sterling Ruby, the designer Peter Mueller, the photographer Willy Vanderperre, the florist Mark Colle, and others.

“Fashion has become extremely systematic now. It has become surrounded by a technical structure of nance and production that makes it very complex. I lose interest”.

The designer often thinks about leaving the fashion industry for a private farm in picturesque Belgium. He can allow that: Raf Simons’s net worth is $18 million in 2019.