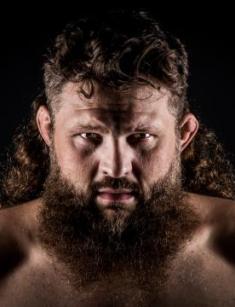 Roy Nelson is the athlete, whose name is known in the world of the single mixed combats. He performs in the Heavyweight division of Bellator MMA. Nelson participates in the fights of the UFC, IFL, EliteXC and has the title of ex-champion among the heavyweights in the IFL.

Roy Nelson was born in the U.S. state of Nevada, in Las Vegas, on June 20, 1976. He loved sports and was fond of not only wrestling but also baseball, football and even was a member of Las Vegas Blackjack in his youth. Roy played for the rugby team for two seasons: in 2002 and 2003.

The teenager began to study kung fu at the age of 16. Roy had an objective perception of reality and his own opinion of what happens around him. He tried to contribute to the life of his native city, combining training with study.

It is not easy for a young man to adhere to the right moral principles in Las Vegas. Nelson worked as a volunteer and paid attention and time to difficult children after school. Unlike his peers, the athlete did not use drugs and wanted to help others.

In 2003, Roy appeared in the professional ring for the first time. So, Nelson's career in MMA began. In 2009, he received a black belt.

Roy used his knowledge in the first battle with opponents in the octagon. The athlete was able to overcome stronger opponents easily. Nelson chose a nontrivial way, understanding that it is possible to get to the UFC in different ways. He became a member of the favorite reality show "The Ultimate Fighter." Organizers of the program remove the training and fights of applicants for entry into the UFC and the winner of the show has fans around the world.

Roy Nelson repeatedly defeated rivals in the ring. Among them were Kimbo Slice and Brendan Schaub. His victory brought the athlete the status of the unconditional leader of the tournament and opened the prospect of getting into the sport. The next opponent for Nelson was the Dutch fighter, Stefan Struve, who is known under the pseudonym Skyscraper.

Struve had tactics and high growth, he was a legend in the promotion but the wrestler suffered from a lack of endurance, unlike Roy. The first round of the meeting ended with a knockout and a victory of the young opponent.

Organizers decided to make a fight of Nelson with Junior dos Santos, the strongest fighters of the promotion. Roy did not manage to gain a lot of skills by that time. And it was not so easy for him to reflect strong blows of the Brazilian fighter. Santos was a winner in this fight. But this fight brought Roy the love of the audience because he managed to stay undefeated until the decision of the judges.

The next battle, in which Nelson had to be in the role of the victim, was a meeting with Frank Mir. Roy was not in his best physical shape, for which he was criticized. The athlete said that he was going to lose weight for a transition to a semi-heavy weight category. It did not happen but defeat was followed by victory.

Nelson managed to be a winner in the fight with Mirko Filipović. Fans were sure that the long-time participant of battles would be the winner but Nelson knocked him out in the 3rd round.

Fabrício Werdum was a top athlete, who was the opponent of Roy, he was the first fighter, who managed to defeat Fedor Emelianenko. Nelson could not resist but the battle was so spectacular that it was the best performance of the evening. Roy Nelson entered the top 10 of the UFC, although few people believed in his ability to take this title.

The athlete was often in fights for "a verification" of contenders for the top 10 of the category of heavyweight. Those athletes, who managed to survive, received the ticket in ten best heavyweights of the UFC. Defeats followed Roy's victories in the octagon. He managed to defeat Antônio Rodrigo Nogueira, Antonio Silva, Cheick Kongo but could not resist the fight against Mark Hunt, Alistair Overeem, Josh Barnett and Derrick Lewis.

Roy Nelson got a chance to try his hand in a new way, changing the promotion. Having become the fighter of Bellator, he decided to use the opportunity. Roy`s tactics did not change but it often brought victories and demonstrated effectiveness. Nelson surrounds the enemy and waits for the moment to apply overhead.

The fighter makes crisp and accurate strikes without any injuries at the time of convergence. Only a couple of fighters managed to knock Roy out. Roy Nelson's performances are remembered for their brightness and dynamism but the fighter does not manage to be in the top of 10 best athletes of his category.

Roy's biography is closely connected with sports and his wife, Jess Nelson share this hobby. The couple has been married since 2009. The athlete is happy in his personal life and his beloved wife supports him in classes with the younger generation of athletes.

Roy loves children, so he is a caring father in a relationship with his son. Joint photos with his family are often published on his account on «Instagram.» He likes to share with fans his touching moments of pastime with his child.

In 2018, Roy Nelson fought against Sergei Kharitonov on competition of Bellator 207 and had a defeat. He lost the battle with the athlete Matthew Mitrione.

The fighter continues his athletic career and will come face to face with a former opponent Mirko Filipović in February 2019. Nowadays, the athlete is in a competitive physical form, although analysts do not make big bets on him.