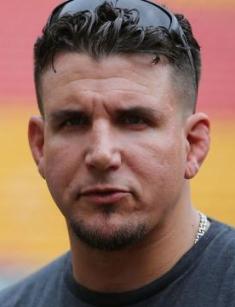 Frank Mir is a mixed martial artist who participates in MMA and UFC events; he used to be the UFC Heavyweight Champion. Experts view him as one of the best Heavyweight division embers. Indeed, his professional record is impressive; Mir is the first sportsman who knocked out Antônio Rodrigo Nogueira.

Frank Mir was born on May 24, 1979. His life has always been connected with mixed martial arts: the boy’s father owned an American Kenpo school and insisted that his son should practice jiu-jitsu. Mir was reluctant but gave in finally.

The young man also attended Bonanza High School. He began to fight in the ring as a junior student but lost the first nine meetings. The failure did not stop him, and 1998 brought the victory in the state championship for adults. Mir did not limit himself in sports and also practiced track-and-field and soccer; he broke the record in discus throwing: 54 m. 20 cm. In 2004, Frank received a black belt in jiu-jitsu.

As soon as Frank finished his studies, he did not have the opportunity to apply his skills to practice: he worked as a nightclub bouncer until the UFC matchmaker Joe Silva noticed his talent.

Frank Mir’s professional debut took place in 2001: he had to face the four-time world champion in jiu-jitsu Roberto Traven. The newbie seemed to have no chance to win, but he immediately gained the victory with an armbar. The next opponent, Pete Williams, was also defeated in the first round with an inside shoulder lock.

The meeting with Ian Freeman marked the first failure. However, Frank improved the situation with three consecutive victories and faced Tim Sylvia in the battle for UFC Heavyweight Champion title in 2004. That night, Mir got the victory and the black belt in jiu-jitsu.

The triumph was darkened soon: the athlete had a road accident when he was driving a motorcycle. His vehicle hit a car, and the man had a broken femur and torn knee ligaments. It was a direct threat to Mir’s career, but surgery promised a positive outcome.

While the athlete was recovering, Tim Sylvia lost to Andrei Arlovski, and the latter was awarded the Interim Heavyweight Champion title. Mir was unable to fight against the winner and had to accept the rival’s success.

The sportsman returned to the ring in February 2006 and fought against Márcio Cruz but lost. Five months later, he met with Dan Christison. Despite the victory, Frank’s condition was far from being perfect: the trauma deprived him of techniques and speed, and experts did not appreciate his performance.

The next rival, Brandon Vera, gave a technical knockdown to Mir. Criticism was getting sharp, and few professionals believed the man could reach the same success as he had had before the accident. Frank had to miss the fight against Antoni Hardonk due to his shoulder injury. However, the postponed event took place, and the victory marked the rebirth of the sportsman.

In 2008, Frank Mir defeated the debutant Brock Lesnar; the following battle against Antônio Rodrigo Nogueira in Dana White’s mini-tournament was a pure success for Mir. The athlete was supposed to fight Lesnar at UFC 98, but a knee injury prevented him from doing that. The rivals participated in UFC 100, and Lesnar won with a technical knockout.

The victory over Cheick Kongo happened in December 2009. Soon, Shane Carwin took the interim UFC Heavyweight Champion title, but Mir rehabilitated in the match against Mirko Cro Cop and won in the third round.

The jury gave the victory to Frank when he fought against Roy Nelson. Nevertheless, Junior dos Santos surpassed the athlete and won the UFC Heavyweight Championship.

The further performance of the ex-champion was marked with mixed success. Daniel Cormier, Josh Barnett, and Alistair Overeem defeated him, but Frank improved his results after a year of recovery and crashed Antônio Silva and Todd Duffee. The following meetings with Andrei Arlovski and Mark Hunt brought failures.

The man’s personal life has been happy. He married in 2004; his wife’s name is Jennifer. The couple has three kids together: the daughter Isabella and the sons Cage and Ronin. Besides, Mir welcomed Jennifer’s son from her first marriage; he brings him up as his own child.

Frank collaborated with Absolute Championship Berkut for a while as a sportscaster. He often shared his opinion about upcoming events; for example, he predicted the victory of Ryan Bader in his fight against Fedor Emelianenko in 2019.

Despite the loss against Javy Ayala in 2018, Mir is not going to finish his career.

In 2019, the sportsman has tried himself in professional wrestling and participated in Bloodsport: the staged fight based on the 1988 movie under the same title.