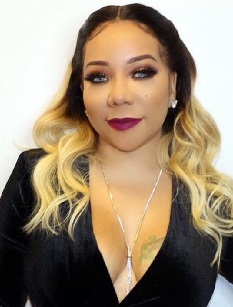 Tameka Dianne “Tiny” Cottle (Tiny Harris) is a famous American singer and a songwriter. She became popular in the 1990s after joining the American multi-platinum R&B vocal group Xscape. The celebrity is mostly known for her haircut with braids and under a pseudonym «Tiny» - she acquired it due to her height of 4’11”.

Harris’ birthplace is College Park, Georgia. She was born there on July 14, 1975, to the family of European American mother, Dianne Cottle (b. 1945) and an African American father, Charles “Speedy” Pope (1936–2013). So, the star is of mixed-race. She became interested in music as a child – she dreamt about performing on stage. Cottle’s father and her uncle, Joseph Pope (1933–1996) were the founders of the R&B band The Tams.

As a teenager, Harris became a member of the R&B group Xscape in 1992. She studied at Tri-Cities Performing Arts High School. Jermaine Dupri, a famous producer, noted the group while singing at his birthday celebration in Atlanta. They signed a deal with his new label So So Def Recordings.

Together they released three albums which were certified platinum: “Hummin’ Comin’ at ‘Cha”, “Off the Hook”, and “Traces of My Lipstick”. For her talent, the singer was awarded by two Soul Train Music Awards for Best New R&B Artist and Best R&B Album and the A-Town Music Award for Best Duo/Group. She was a leading singer on six of Xscape’s hit songs: “Understanding,” “Do You Want To?”, “All I Need”, “Love’s a Funny Thing,” “My Little Secret”, and “Am I Dreamin’.” Besides, she took part in the recording of singles for Soul Food, Panther, Bad Boys, and Love Jones. In 1998, after the release of Xscape’s third album, “Traces of My Lipstick”, the band parted ways.

Two years later Harris and her former colleague Kandi Burruss received a Grammy Award for Best R&B Song for penning TLC’s hit single “No Scrubs.” Also, Cottle was honored with American Society of Composers, Authors and Publishers award in the R&B and Pop Music categories for “No Scrubs,” as well as with the ASCAP Rap Award for her work on the Sporty Thievz track “No Pigeons.” In her career, the woman has worked with many stars, including T.I., 8Ball & MJG, Lil Kim and Bow Wow.

Five years after their breakup, Cottle reunited with former colleagues - sisters LaTocha and Tamika Scott and added a new member, Kiesha Miles to their band. Xscape released an album called Unchained and the single “What’s Up” in 2005. Tiny Harris and the ladies of Xscape were among the hottest artists in the 1990s but compared to singer and songwriter R. Kelly.

Cottle works on a project the OMG Girlz with Kiesha Miles. Cottle’s daughter, Zonnique, is a part of the musical trio.

She appeared in her husband’s video for “Hello” along with their family and the OMG Girlz.

In 2014 Harris got back to music, having created her own label Pretty Hustle. She also published a single “What The Fuck You Gon Do?”. It immediately reached the number 5 spot on the iTunes R&B/Soul charts and less than 24 hours after release it became the number one song on the charts for the genre.

She and bandmate Kandi Burruss, also have writing credits on the song “Shape of You” by Ed Sheeran.

In 2018, Tiny Harris left her XSCAP3 EP Promo to spend some time with her one-year-old daughter Heiress and to do working out.

In 2019 Harris with her eldest daughter were invited to star in the series Wild 'n Out.

Harris’ net worth is evaluated at $5 million.

In 2001, Cottle began dating rapper T.I. They tied the knot on July 30, 2010, in Miami Beach, Florida. They have three children together, as well as four from previous relationships. They also had a baby girl named Leyah, who was stillborn in 2007. Their son Clifford Joseph Harris III was born on August 25, 2004, followed by Major Philant Harris on May 16, 2008, and Heiress Diana Harris on March 26, 2016.

Zonnique was born on March 20, 1996, to parents Tiny and Zonnie “Zeboe” Pullins. She was formerly a member of the girl group OMG Girlz and has since released solo music under her own name. Zonnique also has a recurring role on the reality series Growing Up Hip Hop: Atlanta, and has over 2.8 million followers on Instagram. In 2018, Zonnique changed her eye color, opting for the same cosmetic surgery that her mother used to change her eye to icy grey. She later had the procedure reversed, however, citing ocular pain and a fear that she could go blind.

Messiah Ya’Majesty Harris was born on February 2, 2000. He is a music producer who worked on his dad’s most recent album, Dime Trap.

T.I. and Tiny’s second child, Leyah Amore Harris, was stillborn on March 22, 2007. The sac that held Leyah was split in two, and they had not combined by the time she had turned 16 weeks old. Tiny talked about the trauma of losing a child, saying that she went through a period of depression. “Here I am in the hospital to have a baby, deliver it, but I’m going to go home with no baby,” she explained. In 2014, Tiny got a jewelry piece to commemorate her daughter.

Their family faced another tragedy this year: T.I.’s sister Precious Harris was hurt in a car accident in February 2019. She was driving with her granddaughter Kairi Chapman when she suffered an asthma attack, and inadvertently drove the vehicle into a telephone pole. She was recovered from the scene and kept in Intensive Care until her death on February 22. She was 66.

The couple had to get through difficult times in 2016-2017. Harris even filed for divorce, citing unreconcilable differences as the cause.

That time Tiny was invited to the Wendy Williams Show to discuss the issue. Williams asked her about Instagram model Bernice Burgos, who was revealed to be having an affair with T.I. earlier that year. Since this revelation, Burgos and Harris have engaged in a series of bitter arguments on social media; criticizing one another and claiming that the other is a liar. The rapper has kept his distance in the matter, but it’s obvious from Harris’ bluntness on the matter that she’s had enough. According to Tiny, the woman came after she filed for divorce.

Harris also spilled a few interesting details as to the nature of her relationship with her husband, saying that Burgos was “somebody who just comes in and is gone” and that its simply “what [T.I.] does.”

Some of Tiny’s friends were speaking out on the situation and one friend in particular took to Instagram to GO OFF in defense of the Family Hustle star. Sabrina Peterson — Tiny‘s gal pal, also used the opportunity to call out Tiny’s ‘ghetto’ friend — Shekinah Anderson — for not sticking up for Tiny publicly.

Fortunately, the spouses managed to save their marriage and remained together. Nowadays they live together in their own house in Jonesboro, Georgia.

On September 1, 2010, Tameka Cottle and her husband T.I. were arrested and accused of possessing methamphetamines. Interestingly, five months before T.I. finished a prison stint on weapons charges.

They were arrested in West Hollywood. Deputies smelled marijuana and pulled the couple over, the Los Angeles County Sheriff’s Department said. They were revealed from jail at about 4 a.m. Thursday after posting $10,000 (U.S.) bail each.

Earlier, T.I. spent seven months in an Arkansas federal prison and three months in a Georgia halfway house on federal weapons charges. He was accused of possessing unregistered machine guns and silencers. He was sentenced to serve three years of supervised release after his prison sentence ended in March and was ordered not to possess a controlled substance illegally.

Since his release, the rapper, who previously spent time behind bars for drug offenses, has vowed to live a better life. He spoke to children about the dangers of drugs and guns.