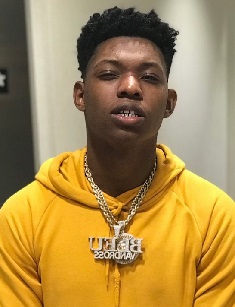 Yung Bleu’s real name is Jeremy Biddle. He is Alabama native, who born there in 1994. He became a well-known rapper in 2017 thanks to his viral single “Miss It”. He released six serial mixtapes “Investments” and got wide acclaim and recognition of others rappers. He recorded his first songs at the age of 11 with Nokia cell phone.

Nowadays, the lyrics of his songs translate the importance of love and relationships. The rappers top hits are “The Plan”, “Old Me”, “Unappreciated”, “Miss It” and “Ice On My Baby”. His net worth is estimated at $1 million.

Jeremy was brought up in Mobile, which is located in the state of Alabama. He was born there on April 4, 1994. The young boy experienced a hard life and racism. Jeremy was a member of a large household. From an early age, he became interested in music. He liked to listen to Tupac Shakur, Boosie Badazz and Lauryn Hill. Also, the songs of Luther Vandross inspired him to start making music. Yung Bleu was willing to record his middle school raps by any means necessary.

He used to get on the bus and to record on his little white Nokia. He was eleven years old then. He used to record the beats off somewhere else to the tape, then played it from the tape recorder and recorded on the phone. Jeremy got older and left his DIY skills behind, moving on to more sophisticated recording setups by the time he turned 16.

Soon after, he moved to a better part of town and switched his style up, moving away from gritty street raps and incorporating more sung experiences about love. It put the young rapper in a better situation, once he started broadening his vocabulary, broadening his creative thoughts. It just put him in a different lane. He started making a rap about stuff that made more sense. Also, he began getting into relationships. He didn’t have too many friends like other rappers. Maybe this fact helped him not to be involved in crime. Jeremy got the job at the local pipe mill. He wanted to earn money and to invest them in music. Later he used the word “invest” to give the names to his mixtapes.

In 2013 Yung Bleu released his first mixtape, called “Hello World”. The hot single “Go Head” was the leading track. Drumma Boy became the producer of Yung Bleu. It was a small flash in the rap music world. Later the rapper signed a contract with Young Boss Entertainment, which helped him to issue some new singles. In 2015 his first big work came to the world. The first part of “Investments” didn’t help Yung Bleu to get to the tops of music charts.

His next tracks “Change Up”, “On The Line”, “As the World Turn”, and “Run It Up” also didn’t have success. Like any novice rapper, he started to develop his fan-base over social networks, YouTube and SoundCloud. It was the right decision for him. Yung Bleu’s newly released songs received millions of downloads and views. Also, social media helped him to find the next record label. Jeremy made a connection with Boosie Badazz, who took the young talent under his wing.

They released some tracks together, and the result of their relationships’ development was a signed record deal. Yung Bleu became the part of Boosie’s Columbia Records, and it was the real start of his rapper career. The label helped young talent to create most of his top songs. He released his viral single “Miss It’ in 2017.

The music video had collected 74 million views on YouTube by October 2018. With 2018’s Lil Durk assisted “Smooth Operator” knocking on 6 million views and "Unappreciated" hitting the 9 million mark without a video, Bleu built quite the name for himself. His 2018 mixtape “Lucci Vandross” featuring YFN Lucci, was expected by fans a lot. They even stormed his tour bus. The album "Bleu Da Ruler", released in 2017, still is one of the more popular tour albums from Yung Bleu.

In the beginning, the critics used to say Yung Bleu sounded like Kevin Gates. However, through deeper investigation of Jeremy’s tracks, lyrics, and topics, they became understanding how they were wrong. The biggest record Yung Bleu has right now is “Ice On My Baby”. Jeremy collaborated with Lil Durk, Kevin Gates, and Rich Homie Quan. He wrote the “On Cam” lyrics in collaboration with Moneybagg Yo. Jeremy also worked with Wiz Khalifa, the biggest achievement of Yung Bleu’s career, according to Alabama native himself. Yung Bleu is not afraid of speaking about his mistakes. He even released a single “Behind Enemy Lines”, where sang about this theme.

Yung Bleu gives few interviews, but last time he told to XXL his major career’s goal. He said: ”I'm not gon' say I just want to go platinum; I just want to be remembered. I want to make an impact on where, ten years from now, you still listen to my music. That's why my albums have to be deep. 'Miss It' is going down like a song that you will always want to listen to.”

Yung Bleu has a son. He is a big fan of Luther Vandross. According to some media, he has a girlfriend, but her identity is unknown. Some of his songs Jeremy dedicated to her. For example, in the track “Slide Thru” there are lyrics

“I got my mind on my money, but my mind's on you right now. How would you feel if I slid through right now? Had a couple drinks or two. That's why I'm thinking about you”.

There is no information if Yung Bleu has been in jail.