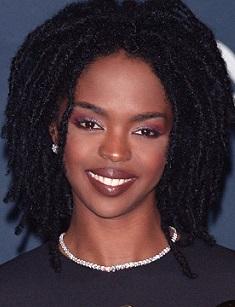 Lauryn Hill is a famous American singer, songwriter, and rapper mostly known as a member of the band Fugees, and for her solo album «The Miseducation of Lauryn Hill.» She started doing Off-Broadways, which got her into Hollywood movies. Over the years, she has also released many solo albums and singles.

She is the winner of many prestigious awards, including 6 Grammy Awards and 4 American Music Awards. She is known as the 'mother of hip-hop invention.'

Lauryn Noelle Hill comes from East Orange, New Jersey – she was born there on May 26, 1975, to the family of Valerie Hill, an English teacher and Mal Hill, a computer and management consultant. Besides Lauryn, her parents had a son Malaney who was born in 1972. Before Lauryn was born, her mother and father had lived in New York and in Newark.

From the very infancy, Hill was surrounded by music – her mother played the piano, father wrote lyrics and sang in local nightclubs and at weddings. As a child, Hill appreciated music by Curtis Mayfield, Stevie Wonder, Aretha Franklin, and Gladys Knight.

As a middle school student, Hill performed with the song «The Star-Spangled Banner» before a basketball game. In 1988 Lauryn appeared on Showtime at the Apollo with the track by Smokey Robinson «Who's Lovin' You» but the audience reacted horribly. The girl stood it initially. However, having left the stage, she started crying.

Studying at school, Hill teamed with Prakazrel «Pras» Michel to create a music group. They found the best young musicians, gave concerts in local showcases and high school talent shows. Originally, Hill was a simple singer. Later she became interested in rapping. One of her icons was Ice Cube.

Besides music, Hill succeeded in acting. She took acting classes in Manhattan. In 1991 she appeared with Jean in Club XII, MC Lyte's Off-Broadway hip-hop rendering of Shakespeare's Twelfth Night. The same year, future celebrity acted on the soap opera As the World Turns in a recurring role as troubled teenager Kira Johnson.

Also, Lauryn Hill played in Steven Soderbergh's 1993 motion picture King of the Hill, in a minor but pivotal role as a 1930s gum-popping elevator operator. Soderbergh biographer Jason Wood described her as supplying one of the warmest scenes in the film. Hill graduated from Columbia High School in 1993. When she was 21, she entered Columbia University and thought of doing a major in history, but when the sales of her album «The Score» went into millions, she dropped out of college.

In 1994, her band changed its name from Tranzlator Crew' to 'The Fugees. Shortly after, their album «Blunted on Reality» was released. Although the collection did not bring commercial success, Hill gained a lot of popularity for her 'raspy alto voice.'

Some time later the same year, Hill founded the «Refugee Project,» - a non-profit organization aimed to bring change in the attitudes and lifestyle of troubled urban youth. She also raised money for Haitian refugees.

In 1997, Lauryn Hill left The Fugees to work on solo projects. She also starred in movies Hav Plenty and Restaurant. She made her first solo record «The Miseducation of Lauryn Hill.»

In 1998, «The Miseducation of Lauryn Hill» was released. The collection was nominated for 10 Grammy Awards. In addition to the top songs from this album, her top hit «Can't Take My Eyes Off You,» from the movie Conspiracy Theory was also nominated.

In 2001, after a long period of the gap in her music career and staying away from the publicity, Hill came to show-business again with an album of the concert entitled «MTV Unplugged No. 2.0». It received a mixed critical reaction, but AllMusic gave it 4 out of 5 stars.

In 2004, the musician sang the tracks «The Passion» and «So High» with John Legend. She also sold her song «Social Drugs» as a pay-per-view on her website, along with her autographed posters. She performed with The Fugees at Dave Chappelle's Block Party.

In 2007, Hill pleased her fans by her new solo «Ms. Hill», which included featured cuts for «Miseducation of Lauryn Hill» and a lot of compilations that she accumulated over the years. She also wrote a song for the movie Surf's Up entitled «Lose Myself.»

In 2010, Lauryn Hill performed in the Raggamuffin Music Festival and also appeared at the Harmony Festival in Santa Rosa, California. During the same year, her single «Repercussions» finished 83rd on the Billboard.

In 2012, Hill gave a concert at the Warner Theater, Washington D.C. and presented a new song called «Fearless Vampire Killer.» She also embarked on a tour, titled «Black Rage,» along with the rapper Nas.

2013 was marked by Hill’s single 'Neurotic Society (Compulsory Mix).' Besides, she released the songs «Everything Is Everything» («After Winter Must Come Spring»), «I Just Want You Around», «When It Hurts So Bad», «To Zion» and made a cover of Lily Allen’s song «As Long As I Got You.»

Lauryn Hill’s net worth is evaluated at $8 million.

Hill has dated her bandmate Jean for a very long time, even after he got married to Claudinette. It led to the end of The Fugees as it was a turbulent relationship. Speaking about Hill’s current love, in 1996 she started relationship with Rohan Marley—son of the legendary singer Bob Marley—and they have five children together.

In 2013, she was sentenced to imprisonment and a house arrest for three months after that. She was put behind bars in May but due to her good behavior and lack of prior criminal record; she was released in October. After jail, her life divided into «then» and «now». Hill decided to dedicate herself fully to music and a family. Now she is looking for her Sverige tour.