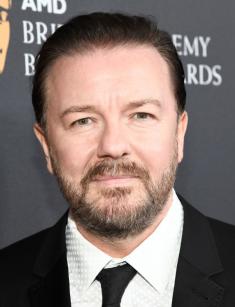 He is a talented and recognized actor. His multitalented nature allowed him to get success in several fields, including acting, writing, directing. Besides, he is well-known for his humanitarian work and influence on social media.

He was raised into a big and friendly family. He has got two brothers and a sister. His family was full, Ricky’s father emigrated during the war in England. There he met his future wife. The actor’s parents lived together in a happy life. His mother died at the age of 74.

At college, he began studying biology but then changed his mind to choosing philosophy. By the time of graduation, his talent was so vivid that he decided to pursue a career in the entertainment sphere. He and his friend formed the music band and even managed to sign the contract with a recording label. They released two songs that weren’t successful in the UK. Those times he also worked as a manager of the famous rock band.

In 1996 he began working on the radio station as a host. During the 90s, he also created comedy sketches for the TV channel and appeared on the small screen as an actor. By the 2000s, he got a regular role on the show “The 11 O’Clock Show”. That time he hosted his talk show, but the show wasn’t popular and soon closed.

In 2001 his life radically changed after releasing the first season of the comedy sitcom “The Office.” The tv series is made in the mockumentary style. Ricky portrayed the boss with significant delusions about his talents. That show gained critical and public success and became popular all around the world. The successful project allowed the actor to get a significant promotion, the public’s love as well as the reputation of a skilled comedian. He began performing as a stand-up comedian as well as tried his hand in writing.

In 2002 the actor took several prestigious awards, among them Broadcasting Press Guild Awards and British Comedy Awards. He was named one of the best comedian actor.

He also worked as a director and screenwriter in the movies “The Invention of Lying.” In 2003 his writing skills, as well as acting ones, were highly appreciated. As a praised writer, he won Broadcasting Press Guild Awards. He also took British Academy Television Awards as for the best comedy performance in the situational comedy.

Next year, 2004, the actor didn’t stop to gather accolades and gained six awards as a writer of the year and best comedy actor on TV.

In 2005 he returned on the screen as a struggling actor in the TV series “Extras.” That was the other highly successful project, which brought the actor many accolades. Those times he also launched the show on the Internet Ricky Gervais Show. That podcast was top-rated and gathered a base of regular fans. That year he was numerously nominated and received the significant award for outstanding achievements in the entertainment industry. In 2008 he achieved the new heights taking the Golden Globe Award for his exceptional work in “Extras.”

Besides regular work on the small screen, the actor made several appearances in the movies, among them “Night at the Museum” and “Ghost Town.” The latter allowed him to play his first leading role. The actor portrayed a man with near-death experience who could see ghosts.

The recent events displayed the 58-years old actor stay in comedian’s shape. Thus in 2020, the actor took part in the awarding ceremony “Golden Globes 2020”. His hilarious awards speech on the ceremony had watched 1,5 million on YouTube for three days. He opened the awarding ceremony with the statement, which proved to be very cynical.

“Let’s go out with a bang. Let’s laugh at your expense. Remember, they’re just jokes. We’re all gonna die soon, and there’s no sequel, so remember that.”

The actor called the guests of the show not to use it as a political platform. However, many people began considering that Ricky joined the right-wing political party after his speech. The actor mocked that thought on Twitter. He also used jokes about Leo DiCaprio and Harvey Weinstein, making his statement even more controversial. Many celebrities reacted to his speech in different ways, among them Adam Driver and Tim Allen. Ben Shapiro also expressed his opinion about his speech on the late show.

Since 2009 he regularly expresses his presence in social networks. He has got an account on Twitter, where he became a trendy blogger. Thanks to his widespread presence on social media, he received an award in 2012. In 2014 he was named the most influential person on London Twitter. By 2015 his account had gathered 7 million followers. On Twitter, the actor tries to call people’s awareness concerning animal protection. Besides, Ricky promotes his work to his fans and to express his opinions. Thus he considered that Brexit wasn’t wrong decision.

He is a lover of music as well as acting. Since childhood, he has stayed a big fan of David Bowie. Besides, he draws inspiration from classic comedy duos and contemporary stand-up comedians.

Among the awards which the actor received, we should mention Primetime Emmy Award for outstanding comedian performance. From 2008 to 2020, the actor continues to win prizes and nominations every year, proving the infinite power of his talent.

He is known as a vivid animal right supporter. The actor translated his thought about animal protection via Twitter. Besides, he contributed to curbing animal abuse. For his prolific career the actor gathered a huge fortune. His net worth is about $130 million, that’s why he allows tospend a big amount of money to charity.

In 1982 he met an author and producer and fell in love. He and Jane Fallon remained together for years, even though they decided not to marry.

When the reporters asked them about the decision not to tighten the knots, they answered that they didn’t believe in God and didn’t see the necessity to make an actual wedding ceremony. Besides, they are child-free because they didn’t imagine the possibility to dedicate 16 years of life to the other person.

The actor is known as a supporter of minorities’ rights. He praised the same-sex marriages in Britain. The actor is an atheist as well as a humanist. He said that he denied religion when he was eight’-years boy. He vividly expressed his thoughts in the article, where he defended his decision to stay atheist. As a personality with a vivid position promoting rationalism, Ricky received an award from the Richard Dawkins organization.