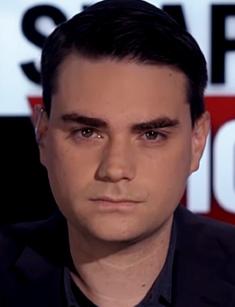 Benjamin Aaron Shapiro is a political commentator, lawyer, and writer. Shapiro is the creator and main editor of The Daily Wire, and he is also occupied in writing articles for Creators Syndicate and Newsweek and hosting The Ben Shapiro Show. Benjamin is famous for great speeches, for instance, at CPAC, Politicon (VS Cenk Uygur), before Congress in 2017, and for his books which amount is more than 10.

Benjamin Shapiro was born in Los Angeles in 1984. His parents both worked in Hollywood: mother was an executive of one TV Company and father worked as a composer. As a kid, Shapiro was interested in music. He started playing the violin rather early, and by 12 years old, in 1996, he performed at the Israel Bonds Banquet.

Speaking about Benjamin’s education, he studied at the Walter Reed Middle School, and after skipping third and ninth grades, he went to the Yeshiva University High School of Los Angeles, where Shapiro graduated in 2000. At the University of California, Benjamin got his bachelor degree in political science, and then he studied at the Harvard Law School till 2007. Since childhood, Shapiro was very interested in politics, which would become his principal interest in the career.

After graduating from Harvard Law School, Shapiro worked as a lawyer at the firm called Goodwin Procter. In 2012, he already ran his own legal consultancy company Benjamin Shapiro Legal Consulting.

By age 21, Shapiro has written two books. In his first book “Brainwashed: How Universities Indoctrinate America's Youth” (2004), he claims that there is a wrong atmosphere at universities because students who haven't formed their own strong opinions, might be overwhelmed by teachers. His fourth book, “Primetime Propaganda…” (2011), is about Hollywood having a left-wing agenda which is actively promoted through various prime-time programs.

In 2012–2016, Shapiro worked as an editor-at-large in Breitbart News, a conservative website. After leaving this position, he became a rather frequent target of anti-Semitic from the alt-right. In 2013, Benjamin and his business partner Jeremy Boreing created a news website TruthRevolt that was about observing media and activism in the U. S. Besides this, Boreing and Shapiro founded the website The Daily Wire in 2015, where Ben works as editor-in-chief.

In 2012, Shapiro became a host on the morning program of the radio station KRLA-AM 870 together with Heidi Harris and Brian Whitman. In 2016, he was one of the hosts for a conservative radio show, “The Morning Answer." Also that year, Benjamin was getting a lot of pressure due to the 2016 presidential election. Although he was told to support Donald Trump more, Shapiro still criticized Trump and supported Ted Cruz.

Benjamin also hosts his political podcast The Ben Shapiro Show, which was ranked as the second most popular podcast in the U.S. In 2019, his podcast changed one hour to three hours of work. The Ben Shapiro Show is being broadcasted by over 200 stations. On his show, Shapiro had a lot of interviews with various people, for instance, with Justin Trudeau and Andrew Yang who, by the way, is a 2020 Democratic presidential candidate. Ben does not only take an interview with some people, but he is also interviewed by others. This year, in the BBC Politics Live broadcast, Shapiro was interviewed by Andrew Neil. It became a scandal because Ben called Neil a "lefty." Soon after that, he apologized which was rather interesting: look at Ben before and after this case, and you will notice that this man can make concessions. Besides, Shapiro appeared a few times on The Joe Rogan Experience.

Shapiro is a speaker. He speaks at college campuses across the United States, and the mood of his speech is usually conservative. Not all of the students are happy to see Shapiro. In 2016, Ben was scheduled to hold his speech at the California State University. The University president, William Covino, canceled this event three days before the date. Eventually, the speech took place at the right time. Protesters blocked the doors to the event, and at the beginning of Ben's speech, someone pulled the fire alarm. Young America's Foundation with Shapiro as one of the claimants filed a lawsuit against this university saying that the First and Fourteenth Amendment rights of the students were violated by Covino. Apart from that, Shapiro has also spoken at the Chapman University, University of Michigan, University of California, Berkeley, etc.

For now, estimated Shapiro’s net worth is $8 million.

While being such a political activist, Shapiro has a lot of opinions on various spheres of life.

In 2008, Ben married Mor Toledano, who works as a medical doctor. They have two children: a girl born in 2014 and a boy born in 2016. The family lives in Los Angeles. Shapiro is a famous activist who has his followers but also enemies. Fortunately, in 2019, the FBI arrested a man who had made several death threats against Benjamin and his family.

As most of the famous people, Shapiro is often used for laughing and creating some jokes. For instance, in 2018 there appeared a video "Ben Shapiro in a nutshell” which went viral rather soon. Another joke is about Ben arguing from the locker; it shows that this man is very argumentative and he would say his opinion in any situation.

On the website, change.org appeared a petition named “Get Ben Shapiro to Come to Australia and Play Violin." As we said, in childhood, Ben learned how to play the violin.