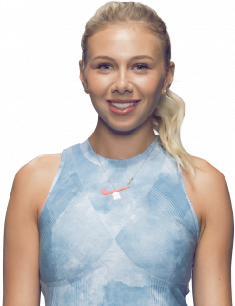 Amanda Anisimova is a Russian young professional tennis player born, living and performing in America. Aged 17, she is the youngest sportsman in the Women's Tennis Association (WTA) top 100 list. Most recently one of the most important events of her life occurred – she won her first WTA title at the Copa Colsanitas on April 29, 2019.

By her professionality, Amanda is often compared to such tennis icons as Elise Mertens, Aryna Sabalenka, Kiki Bertens, Petra Martic, and Andrea Petkovic.

Amanda Anisimova's birthplace is New Jersey, the United States – she was born there on August 31, 2001, to the family of Olga Anisimova and Konstantin Anisimov. The couple had moved from Russia to the USA several years before she was born in order to give their children more opportunities.

Besides Amanda, there is one more kid in the family – her elder sister Maria, who played college tennis for the University of Pennsylvania while attending undergraduate business school. Remarkably, their parents were involved in the finance and banking industries and were strangers for sport in their youth.

Amanda became interested in tennis when she was 2. In her admissions, the girl said she was inspired for playing this game by her sister. Amanda often saw Maria playing, and the desire to do the same was born in her mind.

The family changed the place of living when Amanda was an infant – they moved to Florida. There tennis was more developed, and the girls had more opportunities to practice. Initially, the girls trained with parents. Later, at the age of 11, Amanda started working with Nick Saviano. Max Fomine, who has also been an assistant coach for the Bryan brothers, has served as her traveling coach.

Anisimova’s idol has always been Russian tennis star, Maria Sharapova. Amanda is astonished by her results. Sharapova hit the WTA Tour when she was just 14 years old. Only a few years later in 2004, she took home the Wimbledon title at age 17. In the final, Sharapova upset top seed and defending champion Serena Williams. It made her the third-youngest woman to win the Wimbledon title, behind only Lottie Dod and Martina Hingis.

In 2016 Amanda Anisimova was ranked 2nd in ITF world junior ranking. As a teen, she succeeded to get to the 2015 Abierto Juvenil Mexicano. She was outside the top 300 but happened to become a winner of the high-level Grade A tournament at the age of 14. 2016 was marked by Anisimova's victory in the Grade 1 Copa del Café and reaching the final at the Grade A Copa Gerdau. Due to such excellent results, the girl was the No. 2 seed at the French Open.

Taking part in her second career junior Grand Slam tournament, she became the first American finalist at the girls' event since Ashley Harkleroad in 2002 before finishing runner-up to Rebeka Masarova. In summer Amanda participated in the USTA Girls' 18s National Championship and got to the 4th place.

At the age of 15, Anisimova pleased her parents by other big awards - the first at the Grade 1 Yucatán Cup in late 2016 and the second at the Grade A Copa Gerdau in early 2017 where she had been a finalist a year earlier. Amanda also won her first Grand Slam title at the US Open, having defeated fellow American Cori Gauff. Amanda Anisimova also performed for the USA in 2017 Junior Fed Cup. Unfortunately, she didn't attend the final because of an illness.

In summer 2016, Amanda got a wild card into US Open qualifying – it was her debut professional championship. Her first match was against world No. 124 Verónica Cepede Royg - Anisimova defeated the opposer. However, in the next round, Amanda was outwon. Having got her junior title at the 2017 Copa Gerdau in February, Anisimova stayed in Brazil and played in an ITF $25K event in Curitiba.

The girl advanced to the final on the pro tour at the tournament for the first time. The match was played the main draw. Shortly after, Amanda got a wild card into the Miami Open, where she lost to Taylor Townsend in three sets in her WTA main draw debut.

Amanda added the USTA French Open Wild Card Challenge victory to the list of her winnings and reached back-to-back finals at the ITF $80K event in Indian Harbour Beach and the ITF $60K event in Dothan the following week. She broke into the top 200 of the WTA ratings by capturing her first career professional title at the $60K event in Sacramento towards the end of July while she was still 15 years old.

In 2018 Amanda took part in the inaugural Oracle Challenger Series 125K events at Newport Beach and Indian Wells. At the Indian Wells Open, she was the youngest player who had ever reached the fourth round since Nicole Vaidišová in 2005. Anisimova won all the opposers - Pauline Parmentier, Anastasia Pavlyuchenkova, and Petra Kvitová. At the Miami Open, she beat Wang Qiang in the opening match. Due to such a growth in the sport, Anisimova advanced to the No. 128 in the world rankings. That time she injured her leg and had to miss four months of playing.

She got back to playing in July and took part in the Silicon Valley Classic there she faced Wang Qiang again. Besides, she participated in the Cincinnati Open and got to its third round.

Performing in the US Open, she lost her opening match. Shortly after Anisimova entered the Japan Women's Open. In her first tournament as a 17-year-old, she qualified for the main draw and made it to her first career WTA final, dropping just one set overall and none in the main draw before the final. She defeated top seed and world No. 41 Zhang Shuai in the semifinals before finishing runner-up to second seed Hsieh Su-wei. With this performance, she also cracked the top 100 for the first time.

Amanda took part in the Australian Open, reached its 4th round and advanced to the quarterfinals at the Auckland Open. As for the Australia Open, the girl won her first three matches in straight sets, including a victory over one of the favorites for the title in the world No. 11 Aryna Sabalenka, before losing to eventual finalist Petra Kvitová.

Besides, the girl entered the Copa Colsanitas in Colombia. She became the winner of 4 of her five matches in 3 sets, including the final against Astra Sharma. At the end of the season, Amanda was named the youngest semifinalist at the French Open since Vaidišová in 2006. Performing at the tournament, Amanda beat No. 11 Sabalenka again in the second round and world No. 3 Simona Halep in the quarterfinals.

She did not lose a set until the semifinals when she was defeated by the eventual champion and world No. 8 Ashleigh Barty despite coming from behind to win the first set after losing the first five games and needing to save two set points in the sixth game. With this result, she advanced to No. 26 in the world.

Much of the money came from her win at the 2019 Copa Colsanitas in Bogota. It brought her $250,000 in prize money. It still stands as her lone tournament title in her career, although she also reached the finals at Hiroshima in 2018. Her overall record in matches is 65-32.

There is a rumor Amanda Anisimova is dating fellow tennis player Mark Sverdlov. The two have known each other for a long time. Back in 2009, before Amanda was even 10, the two ranked second at the USTA Florida Jr. State Doubles Championships in the Mixed 10-under division. In addition, they trained together up until 2017 when she shifted her focus full-time to the WTA circuit.

However, Amanda’s «boyfriend» Sverdlov took a completely different girl to prom last month. Today, Anisimova herself seems to be completely focused on her tennis, which has her on the brink of her first Grand Slam title and biggest payday to date.

Besides, people suspect Nick Kyrgios in having a romance with Anisimova. Nick Kyrgios looked quite interested in hanging with Amanda, and he is always fast in commenting her posts which became a reason of speculation on Social Media about their possible affair.

Once in an interview, Amanda said she wanted to become a surgeon. She shared she planned to go to online college or to med school.

She won the 2017 Junior US Open, as well as two other Grade A titles. She also became the first American finalist at the French Open girls' singles tournament in 14 years. Anisimova won her first WTA title at the Copa Colsanitas in April 2019 at the age of 17.