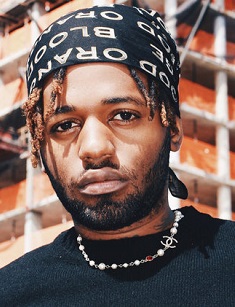 MadeinTYO’s real name is Malcolm Jamaal Davis. He is from Honolulu, Hawaii. He was born there in 1992. Nowadays he is a novice rapper, got wide acclaim thanks to his first mixtape “You Are Forgiven”. His single titled “Uber Everywhere” was listed at number 51 in the Billboard 100 music chart.

MadeinTYO has collaborated with popular hip-hop artists such as Big Sean, Travis Scott, Wiz Khalifa, and Pharrell Williams. Malcolm has released only one studio album. The rapper has an estimated net worth of somewhere near $2 million.

The birthplace of Malcolm is Honolulu, located in Hawaii. Born on April 12, 1992, he didn’t spend much time there. His father was military and moved with his family from one location to another. As a kid, Malcolm lived in Texas, Virginia, and California. There was no place on the map of the US, which Davis didn’t visit. Then the family moved to Japan and settled in Yokosuka, Kanagawa Prefecture. Malcolm studied in Nile C. Kinnick High School. According to Malcolm, growing up in Yokosuka was pretty dope. He did from ninth grade to a year out of high school. He had a prom in Tokyo; he graduated like a couple of minutes away from Yokosuka.

On the weekends he went to Roppongi. Malcolm had a lot of military friends that had curfews, and he thought that all he had was school. Malcolm could do whatever, buy whatever, and drink. Growing up in Japan also made it easier for him to express himself in what Malcolm wanted to do because Japanese were not afraid to tell him “Ahh, I like your shoes” or “I like your hair”. There’s no filter on it.

So, MadeinTYO spent six years in Tokyo, moving back stateside after high school where he wound up joining an art collective started by his older brother, Royce Rizzy, called Private Club. They have always done everything together. They used to look up to their cousin who was rapping, and they watched him recording in his room and wrote their own stuff. He turned the beat off, and they still were rapping. He started setting up sessions in his room to record the brothers.

Their voices sounded super light and pip-squeak. Their mom used to play it—she pulled up in her Lexus blasting it and was like "these my babies". Later Davis took a stage name “MadeinTYO”, dedicating it to his life in Japan. It pronounced as “Made in Tokyo”. He spent the most difficult part of human’s life, adolescence, in Japan. It was a time of first serious problems, decisions, and conflicts. His stage name meant that he was born in Tokyo as a personality.

In 2016 MadeinTYO recorded his first outstanding song in his kitchen. His mom was there, too. The whole crew was there in the kitchen, doing what Private Crew did. At that moment the song just came up. "Uber Everywhere" was just a random line that he said and then ran with. He didn't feel like it was a song until a day later when he listened to it. The single became successful on the Billboard and radio. The later remix of the song featuring Travis Scott was certified platinum by the RIAA.

Later that year, MadeinTYO issued his first mixtape on iTunes. That project was greeted by good critics. He had succeeded to release several singles, EPs and mixtapes with well-known rappers before the first studio album “Sincerely, Tokyo” was issued on October 26, 2018.

His top songs were “I Want”, “Skateboard P”, “Eating”, “Savage”, “Time of her Life” and others. He even recorded a song with his brother, which was called “Tear it Down”. There are such tracks in “Sincerely, Tokyo” as "Figure It Out", “Ned Flanders”, and "Savannah Sunset".

The MadeinTYO‘s style was considered to be more playful and breezy than usual sounds out of Atlanta. The Hawaii-born musician was not rapping about his money or drug use, either. He was recognized as a modest rapper. MadeinTYO was one of the most streamed artists of 2016, based on the statistics of the popular music streaming service Spotify which provides content from various record labels and media companies.

MadeinTYO has been dropping a vast amount of songs. Lately, one of them was the popular song titled “Love You Down”. In 2018 he also recorded a song with Wiz Khalifa titled “Hit Me Up”.

In 2018 MadeinTYO has shared a new track on SoundCloud called "Summer With Santana". It arrived with the simple message: "<3 enjoy some new vibes".

The song looked forward to the simplicity of summer as the rapper rolled around smoking weed and chasing girls:

Soon it became clear that the woman the rapper was singing to was someone truly special to him.

And it was Anhia Santana, digital artist, and painter from Philadelphia, whom the rapper started dating in 2015. She is better known under the moniker Distortedd. Santana gave birth to their son in January 2017. The family now resides in LA. Similar to numerous rappers, MadeinTYO is highly active online through accounts on social media, promoting his new projects.

MadeinTYO has issued one studio album, two EPs, three mixtapes, four singles as a lead artist, and three as a featured artist.