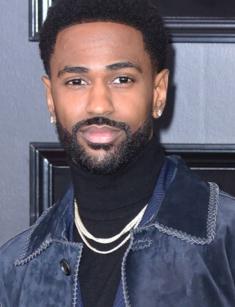 Big Sean is a modern rap icon, idol of millions of fans worldwide. In his career, he has collaborated with other successful rap representatives, such as Kanye West, Drake, Lil Wayne and others. He began getting popularity in 2011 when he recorded his first collection. Big Sean’s albums and songs often get to the top of American charts – what is the secret of his popularity? Read below!

Sean Anderson was born to the family of James Anderson and his wife, Myra. As a kid, he got through his parents' divorce and began living with his mom and grandmother. Their family was a middle-class one, and Sean was forced to help them earn a living from the very childhood. Doing odd jobs, he developed such qualities as diligence, responsibility for his actions, and self-discipline.

He showed apparent talent and inclinations to music as a kid. So, he always impressed his relatives and pals by his musical skills and complicated lyrics he wrote.

In 2005 Big Sean discovered the rapper Kanye West would do a radio interview at a local station. So, future celebrity came to the station that day to demonstrate him his abilities. Originally, West was against the idea of wasting his time listening to a regular fan. Despite, Sean managed to convince the artist and literally impressed him. As a result, the two signed a deal.

2007 is thought to be the beginning of Sean's career as a musician. So, he introduced his debut mixtape entitled 'Finally Famous: The Mixtape' to the world in autumn. Its single under the name 'Get'cha Some' became a real hit and got positive critical acclaim. Such a massive success of the song made Sean shoot a video clip. Hype Williams served as its director. Over the next several years, the musician presented two new mixtapes named 'UKNOWBIGSEAN,' and 'Finally Famous Volume 3: BIG.' They came out in 2009 and 2010, respectively.

In summer 2011, Big Sean's fans could listen to his first studio collection entitled 'Finally Famous.' Such rap icons as Rick Ross, Kanye West, and Wiz Khalifa took part in its recording. The album finished third on the American Hot chart.

The same year, the musician announced he was elaborating his following album. Its lead track named 'Mercy' was dropped in spring 2012. It held the 13th place on the American Hot chart.

In 2012 the singer collaborated with Justin Bieber on the track 'As Long As You Love Me.'

In 2013 Big Sean pleased his fans by releasing his second collection 'Hall of Fame.' Having advanced to No. 3 on the chart, the album received majorly positive acclaim. It should be noted that the work is supposed to be Big Sean's best and most-selling one. One of its most famous songs is 'Beware.'

February 2015 brought the singer the new album entitled 'Dark Sky Paradise' (including the song 'Blessings.') Ariana Grande, Chris Brown and Kanye West contributed to the collection. By the way, the project happened to be a commercial hit making it to No. 1 position on the American Hot chart. Besides the United States, the collection brought Sean recognition in other countries, such as Denmark, Australia, New Zealand, and Norway.

In 2016 Sean collaborated with his ex-girlfriend Jhené Aiko on their album 'Twenty 88'.

The following year, Big Sean published one more successful collection entitled 'I Decided.' Its lead track 'Bounce Back' came out on October 31, 2016.

Besides, in 2017 the musician added the new song 'Pull Up N Wreck' to the list of his projects. 21 Savage and Metro Boomin contributed to its recording. The same year, Sean and Boomin released an album together - 'Double or Nothing.' Besides, Young Thug and Travis Scott appeared on its songs. According to fans, the album's best song is 'Pull Up N Wreck.' Moreover, Big Sean recorded the single 'No Favors' feat. Eminem and 'Living Single' featuring Chance The Rapper.

Big Sean’s net worth is evaluated at $16 million.

Speaking about the celebrity's relationship, he has a long list of ex-girlfriends. So, at the age of sixteen, he got acquainted with Ashley Marie at school. The two started dating and parted ways when the musician turned 19. Shortly after, he got involved with a model Naya Rivera – their first communication was via Twitter. In April 2013 the two confirmed the gossip about their affair – they shared with media their relationship was serious. In October the partners got engaged but ended it one year later.

In 2014 Big Sean was seen together with Ariana Grande – and it was revealed they were a couple. In April of the following year, their affair came to an end.

In 2016 the singer began dating Jhené Aiko – their relationship lasted for three years.

In October 2008, Big Sean's interview was seen on pages of The Source. He shared with journalists his thoughts about fashion and gave his tips how to find one’s clothes style. Moreover, the musician has partnered with Adidas.

Besides music, Big Sean has an inclination towards business. So, in 2013 he created his own clothing firm Aura Gold.

In 2017 it became known the singer bought a considerable home consisting of 6 bedrooms and nine bathrooms located in Beverly Hills.

In 2011, Big Sean was accused of a sexual assault while performing at a concert in New York. Having paid a fine of $750, the celebrity was released.