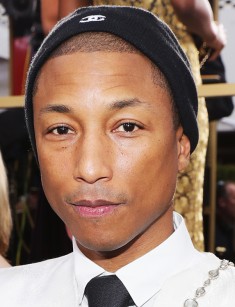 Pharrell Williams is an American singer and producer who has collaborated with Britney Spears, Jay-Z, and Snoop Dogg. The song “Get Lucky” recorded with Daft Punk in 2013 brought the musician the global fame and four Grammy awards. The main composition of the second solo album Girl, “Happy,” topped Billboard Hot 100 for ten weeks and was nominated for the Academy Award. Throughout the man’s career, none of his tracks has been a failure.

Pharrell was born on April 5, 1973, in Virginia Beach, Virginia, into the family of Pharaoh Williams and his wife Carolyn. Soon after the boy’s siblings were born: Pharaoh, Cato, Psolomon, and David.

Pharrell stood out from early childhood. Few people know that the boy was a diligent student and often got it on the neck for his thirst for knowledge.

When Pharrell was a sevenер grader, the parents sent him to a summer camp where the ambitious teenager met Chad Hugo. They joined the local orchestra: Pharrell played the keyboard, and Chad played the saxophone. At the high school, the young men founded the hip-hop quartet The Neptunes together with Shay Haley and Mike Etheridge. The group successfully performed at the school talent competition and, in a while, signed a contract with the producer Teddy Riley who contributed to the development of Michael Jackson’s, Usher’s, and Bobby Brown’s careers.

The Neptunes did not present many singles of their own: they created hits for already popular artists. Not only colleagues but also critics appreciated their works. The musicians were often named the producers of the year and received Grammy Awards and Billboard Awards.

In 2003, the debuting single “Frontin” was presented; later, it was included in the first solo album of the musician. At the same time, Williams recorded the song “Beautiful” with Snoop Dogg and appeared in the music video. September 2004 brought another hit by Pharrell Williams and Snoop Dogg, “Drop It Like It’s Hot”: the song topped Billboard Hot 100 two months later. In 2009, this track was called “Rap Song of the Decade.”

In 2005, the rapper presented the single “Can I Have It Like That” from his first solo album In My Mind (2006). Further on, Williams collaborated with Madonna (he appeared in the music video "Give It 2 Me”), Beyoncé, Shakira, Miley Cyrus, and Justin Timberlake.

In July 2010, the musician turned over a new leaf in his career: he cooperated with Hans Zimmer and recorded the soundtrack for the animated movie Despicable Me with the Hollywood Symphony Orchestra and the music for the 84th Academy Awards ceremony.

In December 2012, the rapper signed the agreement with Columbia Records to release the second album, Girl (March 2014). Soon, on March 31, the musician became a new coach in the seventh season of the American TV show Voice. The next year, the would-be winner of the eighth season Sawyer Fredericks joined Pharrell’s team.

In 2015, Chanel presented the full version of the advertising short movie Reincarnation organized in conjunction with Chanel Metiers d'Art show. In this seven-minute video, the famous model and actress Cara Delevingne and Pharrell Williams performed the song “CC The World” created by the musician specifically for Chanel.

On June 2015, the single “Freedom” created for Apple Music was premiered. Four days before the official release, Williams posted a teaser on his Twitter; later, Apple Music used the same extract in its promo video. On July 22, the full video was published; Paul Hunter directed it. This work became a laureate of Grammy Award for Best Music Video.

In June 2017, the music video of Katy Perry, Pharrell Williams, DJ Calvin Harris, and rapper Big Sean “Feels” came out; the four artists were exploring a piece of paradise. Katy was lying on the grass in a yellow Gucci dress; Pharrell was singing in a boat. Harris was playing the guitar like a rock musician in the 1970s, and Big Sean was sitting on a throne, like a king, with red macaws around. Emil Nava directed the video. This single was included in the track list of Calvin Harris’s new album Funk Wav Bounces vol.1.

The model Helen Lasichanh has been the musician’s only wife. Before the couple married officially, they had been dating for five years. Before that, in November 2008, their son Rocket was born. According to Pharrell, it was his idea to give that name to the boy in honor of Elton John’s hit “Rocket Man.” The artist also devoted the song “Rocket’s Main,” the soundtrack for Despicable Me, to his son.

Helen and Pharrell married in October 2013; the wedding took place at the Kampong National Tropical Botanical Gardens. The party was held on board a yacht “Never Say Never.”

At the beginning of 2016, the man’s wife stopped appearing on the public. To quash gossip, Pharrell Williams said he and Helen were still together and added that his wife was going to avoid noisy social events.

After this vague explanation, the rumors about Lasichanh were spreading. They were confirmed in January 2017 when three new babies were born. Williams’s representative did not reveal any information about the children but verified they were born healthy and felt good and happy, just like their mother.

In June 2017, the animated movie Despicable Me 3 was released; Pharrell recorded the single “Yellow Light” for this project. The same year, the rapper became the main character in the final short movie within the Chanel's Gabrielle campaign. The legendary creative director of Chanel, Karl Lagerfeld, was the author of the video; Antoine Carlier worked as a director.

Pharrell Williams and Chanel have been friends for a long time; the musician is the ambassador for the brand. He broke a record and became the first man in the history of Chanel who participated in the advertising campaign. Before the artist, the actress Kristen Stewart, the model Caroline de Maigret, and the muse of famous designers Cara Delevingne appeared in short movies for Chanel's Gabrielle.

The musician is not only the British model’s friend: they have also worked on several projects together. In December 2014, they co-starred in Reincarnation for Chanel. In 2017, Pharrell produced the woman’s debuting music video “I Feel Everything.” It was the soundtrack for Luc Besson’s Valerian and the City of a Thousand Planets where Cara Delevingne and Dane DeHaan took the lead roles. The single was released on July 20, the day before the premiere of the movie in the USA.

Despite his busy schedule, the musician does not forget about his fans: he regularly posts photos from concerts and vacation videos on his Instagram page. 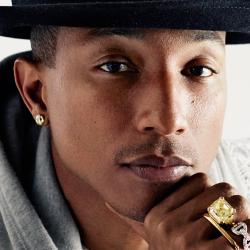