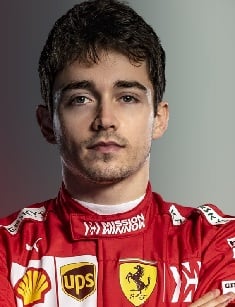 Charles Leclerc is a famous racing driver from Monaco performing in Formula One for Ferrari – their partnership started in 2018. Leclerc is often compared to such karting stars as Max Verstappen, Marcus Ericsson, Pierre Gasly and George Russell. Fast driving is Leclerc’s passion – let’s know what results he has reached due to the love for karting!

Charles Leclerc was born on October 16, 1997, in Monte Carlo, Monaco to the family of Hervé, who raced cars, driving in Formula 3 in the 1980s and 1990s, and was well respected in karting. Charles' father died aged 54. The cause of death was a long illness. Besides Charles, there were two more children in the family – his brothers Lorenzo and Arthur.

Leclerc's passion for racing appeared when he was a kid. So, 4-year-old Charles and his parents visited their friends during the Monaco Grand Prix. Little Charles played cars and listened to the noise of motors outside – motors of the Formula One. According to Leclerc, it is the strongest recollection of his childhood. The following day Charles said he felt bad and was allowed not to go to a kindergarten. His father took him to the meeting with his best friend Philip Bianchi, a father of Jules Bianchi. Their meeting took place at Bianchi's go-cart track.

There Charles took the wheel for the first time. Philip taught him how to drive, explained the basic rules of driving.

As time passed, Charles became more and more experienced. He often asked his parents for going to the go-cart track to pass there several hours. Then Leclerc started doing karting professionally, took part in many tournaments.

2005 is thought to be the beginning of Leclerc's career. Then he took part in the French PACA Championship and won it, as well as did in 2006 and 2008. In 2009 Charles became the winner of French Cadet. In 2010 he advanced to the KF3class in 2010, where he won the Junior Monaco Kart Cup. He continued in the KF3 class for 2011, winning the CIK-FIA KF3 World Cup, the CIK-FIA Karting Academy Trophy and the ERDF Junior Kart Masters. During the year, Leclerc also joined Nicolas Todt's All Road Management company.

In 2012 Charles Leclerc graduated to the KF2 category with the ART Grand Prix team, winning the WSK Euro Series title, as well as finishing runner-up in the CIK-FIA European KF2 Championship and the CIK-FIA Under 18 World Karting Championship.

2014 season was successful for Leclerc. So, he took seven podium positions, including a double victory at Monza, and a victory at Junior Championship. The same year, Charles appeared in a partial EuroCup Formula Renault 2.0.

In 2015 fans could see Leclerc taking part in the FIA Formula 3 European Championship with German team Van Amersfoort Racing. Despite his astonishing performance, he was ranked 4th in the standings, mostly due to damage sustained to his car's chassis following a collision with Lance Stroll at Zandvoort.

Besides, Leclerc performed in the Macau Grand Prix where got the 2nd place.

In 2017 he starred in FIA Formula 2 Championship and became its champion – he performed with his previous team Prema Racing. Generally, the season was great for Charles. The only low on the performance side was the qualy in Monza, and that was his fault because he wasn't good enough in that session. In an interview with Beyond The Grid, Charles said winning the championship was an amazing way for him to honor his father.

According to the driver, his strongest opposers were Oliver Rowland and Artem Markelov. Charles noted that earlier he had not thought they could win the competition. However, in Barcelona, after race one, the hope appeared in his mind. In Bahrain it was a bit unsure whether they had been lucky or if they were very quick because there was a red flag at the wrong moment for the others - so it was difficult to judge.

In the sprint race, his Prema team chose to take a mid-race pit stop, which is very uncommon in the shorter sprint races. He pushed harder on his medium tires, creating a nine-second lead before pitting. This would drop him down to the 14th place, but Leclerc overtook 13 cars and took victory by overtaking Luca Ghiottoon the final lap. After taking pole position for the second time in a row, he then fought off Ghiottoon to win again in the Catalunya feature race, despite a radio issue.

Leclerc did not score any points at his home round at Monaco.

He became the first driver since Nico Hulkenberg in 2009 to win the coveted title in his rookie season. Only two more drivers – Lewis Hamilton and Nico Rosberg have managed to win the Formula-2 Championship in their debut seasons.

In pursuit of the elite trophy, Leclerc started on a pole a record eight times and won the race on seven occasions. The second best was Stoffel Vandoorne, who won the pole six consecutive times in both 2014 and 2015 seasons.

Leclerc first got the taste of F1 car in the first practice session of the 2016 British Grand Prix. It was rumored in 2016 that if Leclerc won the GP3 Championship, he would join the likes of Valtteri Bottas and Daniil Kvyat to graduate to Formula One directly from GP3. The myth was debunked by announcing that he would progress to Formula Two.

In spring 2016 the world knew the news – Charles Leclerc was going to join the Ferrari Driver Academy and perform as a development driver for Haas F1 Team and Scuderia Ferrari. So, Charles took part in the first practice session of the 2016 British Grand Prix driving for Haas.

That time Charles also starred in the Hungarian Grand Prix. Shortly after he participated in the mid-season test in the Ferrari SF70H. Leclerc happened to be the fastest.

At the end of 2017, Leclerc signed a deal with Alfa Romeo Sauber F1 Team to become a regular driver for 2018. Charles was ranked 13th in the championship in his sole season.

Charles Leclerc won the AutoSport Rookie of the Year and the Driver of the Day in 2017 for his exploits in the FIA Formula 2 Championship that season.

In September 2018, Charles Leclerc was hired by Scuderia Ferrari as a replacement for Kimi Räikkönen, who moved to Sauber. They signed a 4-season contract. Leclerc made his first test day as an official Ferrari race driver on 28 November 2018 in Abu Dhabi.

Sebastian Vettel said his new Ferrari team-mate Charles Leclerc would push him hard throughout this season. At the season-opening race in Melbourne, Leclerc qualified two places behind Vettel after making an error on his final qualifying lap. In the race, the two men narrowly avoided a collision at the start as Leclerc tried to pass Vettel around the outside of the first corner, and Leclerc had a trip across the grass later during his first stint.

But in the second stint, after making a later pit stop than Vettel, Leclerc closed a 12-second gap to the four-time world champion before asking on the radio whether the team wanted him to hold position and not try to pass his team-mate. He was told to stay in fifth place. Ferrari team principal Mattia Binotto said he was "happy" with Leclerc's performance on his debut.

At the beginning of 2015, Charles Leclerc started dating Giada Gianni. The Italian beauty was born March 2, 1998 - making her 21 years old. The couple often posts of their trips around the world, including to Disneyland Paris.

Leclerc's father Herve also loved the adrenaline rush of racing in a car. He drove in Formula 3 in the 1980s and 1990s. Also, he was well respected in the world of karting. Leclerc dedicated his F2 title to his father, who died earlier this year.

Two of the most influential persons in his life, his father Herve and his friend Jules Bianchi have both passed away.

Herve was with him at every step of Leclerc's career and motivated him with the tales of Ayrton Senna's heroics on the streets of Monaco. Charles started karting along with Jules on the track which belonged to Bianchi's father.

Just three days after his father's death, Leclerc claimed pole in Baku by a margin of six-tenths of a second. He triumphed the next day and has carried a tribute to his father ever since.