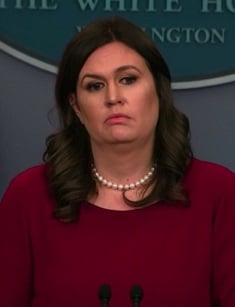 Sarah Elizabeth Huckabee Sanders is an American campaign manager who works as the White House press secretary under President Donald Trump. However, this year it was announced that Sanders had made false public statements and that she would leave her post on June 30, 2019.

Sarah Sanders was born in Arkansas in 1982. Her parents were both politicians: her father, Mike Huckabee, used to be the governor of Arkansas from 1996 to 2007, and her mother, Janet Huckabee, was the first lady of Arkansas. Besides, Sarah also has two brothers, John Mark Huckabee and David Huckabee. As a child, Sanders was growing tough and fearless thanks to her siblings.

Speaking about her education, Sanders graduated from the Little Rock Central High School in Arkansas. Then, she entered the Ouachita Baptist University also in Arkansas, where she was an elected student government president and was active in various Republican organizations. In 2004, Sarah graduated from the university with a bachelor degree in political science and also mass communications.

Sarah has been on the view in politics since 1992 when she was just ten years old. She and her family were involved in the first campaign for the U. S. Senate created by her father, Mike Huckabee. Mike did not have much of a staff, so his relatives used to help him stuffing envelopes, putting up yard signs, etc.

In 2002, Sarah’s father was a part of the Arkansas gubernatorial election, so his young daughter was a field coordinator for Mike’s reelection campaign. By the way, at that election, Huckabee got the post of Governor of Arkansas. In 2007, Sanders moved to Iowa to run her dad’s operation for the 2008 Iowa Republican caucuses, where he turned out to be a surprise winner. Sarah has also served in the Education Department under President George W. Bush and worked on various Senate and presidential campaigns.

Although Sarah’s net worth is unknown, she gets around $180 thousand as her annual salary.

After Donald Trump became the President, Sarah got the position of deputy White House press secretary. In May 2017, she held her first press conference in White House because she was temporarily replacing Press Secretary Sean Spicer. On May 9, during and after the dismissal of James Comey, Director of the FBI, Sanders defended Trump really professionally. Also that month, thoughts about Trump's wish to replace Spicer with Sanders started appearing more and more.

In July, after Sean Spicer’s resignation, Sanders was announced to be the new White House, press secretary. This post is not easy: she needed to fight White House press corps and also to please the president who has always thought that he was the best spokesman for himself. Sometimes, people in the press office cannot get a heads-up before Trump’s tweets, although it is essential that the President likes direct communication with American people.

Sanders is respected by D. Trump; it was said about her that Sarah understands both America and Trump and knows how to connect these two. Sarah became the third woman at this position after Dee Dee Myers in 1993 and Dana Perino in 2007. Trump is not afraid to show how he is proud of his stuff:

However, sometimes, the opinions of Sarah and Trump can be different. For instance, the death of John Sidney McCain, a former U. S. senator from Arizona, who passed away last summer: Sanders publicly called him an American hero and claimed that she would go on his funeral, while Trump did not comment at all due to his tense relationships with McCain.

In 2018, Sanders got the role of U.S. Olympic representative and went to the closing ceremony of the 2018 Winter Olympics in South Korea. She went together with Trump's daughter, Ivanka Trump. Also that year, Sarah had a strict aim to defend the President for calling Omarosa, a TV star, "a dog," and she succeeded!

In summer 2018, there was a discussion about Donald Trump’s Immigration policy that has the separation of migrant kids from their parents at the Mexico–United States border as a result. However, Sanders blamed Democrats in that and referred to the Bible (saying it’s above the law, but in this case, the law is based on the Holy Book), which caused a lot of criticism from the Christian leaders and CNN correspondent Jim Acosta. That is not the only situation when Sarah's comments create some negative reviews. In September 2018, there was an article in the New York Times titled “I Am Part of the Resistance Inside the Trump Administration." For answering this, Sanders used her government Twitter account and called the writer a “gutless loser." This action was considered by the former White House ethics chiefs as abuse of power.

In her work, Sanders often allows herself some controversial comments. In February 2018, a former Staff Secretary, Rob Porter, left his position at the White House due to the domestic abuse allegations. Sarah commented on this that it was his “personal decision," while the deputy press secretary Raj Shah said that Rob was "terminated." Then, in March, there was a scandal between the actress Stormy Daniels and Donald Trump, and Sanders claimed that there was no information about payment from Trump to Daniel. Later, Trump’s lawyer said that there were notes about Trump paying his other lawyer which had paid Daniels earlier.

Recently, in 2019, Robert Mueller compiled the special report called "Mueller Report." It was said there that Sarah admitted lying at the press conference while commenting James Comey's firing. She also often claimed that a lot of FBI agents had called her to complain about Comey, and it turned out to be the information not founded on anything. Besides, Sanders made false statements about Attorney General Jeff Sessions and Deputy Attorney General Rod Rosenstein’s involvement in Comey’s case.

During a Trump rally in Green Bay, Wisconsin, the President was joking about how popular Sanders had become and said: "You're fired!”. Who would think that one day the joke becomes a reality? On June 13, 2019, Donald Trump tweeted that Sanders would be leaving her role as press secretary on June 30 this year. Different people reacted differently but mostly positive like the journalist April Ryan who immediately shared this news on her Twitter. Well, anyway, if we look at Sarah before and after her career as a press secretary, we will certainly see how this woman became stronger!

During her father's campaign in 2008, Sarah met Bryan Sanders, who was a media consultant and just came back from Canada. In two years, the couple got married. Now Sanders and her husband have three children.

The image of Sarah Sanders sometimes turns into the local joke. For example, last year, she wore a striped sweater on the MSNBC channel, and someone used Photoshop to put on her a mask and a hat. That’s when Sarah Sanders as a Hamburglar (the character from the McDonald's commercials) emerged. Other personages who are compared to Sanders are Miss Piggy from The Muppet Show and Uncle Fester from the Addams Family.