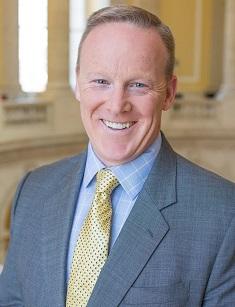 Sean Spicer is an American politician who worked as the twenty-eighth White House Press Secretary and as White House Communications Director under President Donald Trump till July 21, 2017. In his career, Spicer has made a number of public statements which were controversial and false. That’s why nowadays people take his words with caution. But who exactly Sean Spicer is? Let’s know!

Sean Spicer was born in Manhasset, New York, the U.S. on September 23, 1971, to the family of Kathryn (née Grossman), the department manager in the East Asian studies department at Brown University, and Michael William Spicer, an insurance agent, (1944–2016). Sean spent his childhood in the East Bay area of Rhode Island.

Sean Spicer has Irish roots and grew up in a Catholic family. As a child, Spicer studied at Portsmouth Abbey School, a boarding school in Rhode Island. Having graduated, he entered Connecticut College where got a Bachelor of Arts degree in government. In 1993 a conflict occurred - an article in the student paper, The College Voice, referred to Spicer as "Sean Sphincter." He was insulted and complained to the paper and followed up by pushing for college judicial action against the paper, for which he received further ribbing from the campus satirical publication Blats. The situation was later named a precursor of his contentious relationship with the media in the future.

In 2012 Spicer graduated from the Naval War College in Newport, Rhode Island with a master's degree in national security and strategic studies.

In 1999 he joined the United States Navy Reserve – he began his career there with a public affairs officer title. Later he became a commander and was assigned to the 's naval reserve contingent in Washington, D.C.

In 2000 Sean started working as a communications director on the House Government Reform Committee. That time he also served as director of an incumbent retention at the National Republican Congressional Committee (NRCC).

In 2003 he was hired as a communications director and spokesman for the House Budget Committee.

In 2009 Sean Spicer became a partner at Endeavor Global Strategies, a public relations firm he co-founded to represent foreign governments and corporations with business before the U.S. government. He worked with such clients as the government of Colombia.

Press secretary for the Trump administration

On December 22, 2016, Sean became the White House press secretary for Donald Trump. On December 24, he also got the title of the communications director for the Trump administration after the sudden and unexpected resignation of Jason Miller.

In his first press briefing since Trump was inaugurated, Spicer went to immediate war with the press, angrily accusing the media of dishonest coverage. He was upset that a Time Magazine reporter erroneously said that a bust of Martin Luther King Jr. was removed from the White House. The reporter corrected the report.

He also lambasted the press, claiming that Trump’s inauguration crowd size was the largest in history, but many in the media have contested this Spicer claim as well as others. Aerial photos clearly show larger crowds for Barack Obama, and Spicer also made other false claims, such as that the Trump inauguration was the first time that ground coverings were used.

Spicer’s briefing evoked memes, jokes, in the news and in Social Media and the hashtag #SpicerFacts.

His briefing was notable for how angry it was right off the bat; Trump adviser Kellyanne Conway then got into a dispute on Meet the Press, arguing that Spicer was using “alternative facts.” Host Chuck Todd responded that they were falsehoods, and Spicer has been criticized by other former press secretaries.

However, at a press conference on January 23, Spicer struck a more conciliatory and explanatory tone with the press, saying, that his “intention is never to lie” and complaining that the “default narrative is always negative,” which he called “demoralizing.”

This is not Sean Spicer’s first time working in the White House. In fact, Spicer worked in the George W. Bush administration from 2006 to 2008, with his formal title being assistant of the United States trade representative for media and public affairs. Spicer was responsible for being President Bush’s communicator on issues related to trade, often speaking to international media on behalf of the president.

While he was working under President Bush, Spicer was an advocate for free trade, which is at odds with President Trump’s position on the issue today. On January 23rd, President Trump withdrew the United States from The Trans-Pacific Partnership.

Interestingly, while working at the White House, Spicer once was its Easter Bunny. There are lots of funny pictures of him wearing a costume on the Internet.

During the 2016 election cycle, Spicer was the chief strategist and communications director of the Republican National Committee.

Spicer started as communications director for the RNC in 2011, and he added the title of chief strategist in 2015. Among other duties, Spicer was the one to organize all of the Republican presidential primary debates, working with broadcast networks and determining debate formats.

In addition, Spicer worked on planning Republican primaries and caucuses, and he helped to select delegates heading into the Republican National Convention.

Like almost every Republican in Washington, Sean Spicer was once critical of Donald Trump. When Trump launched his campaign by saying that many undocumented immigrants are rapists and murderers, the Republican party struggled to undo the damage caused by these comments. Although Spicer had to be diplomatic and did not directly call out Trump, he did imply that comments like these were damaging to the GOP brand.

In a conversation on CNN about Republicans’ attempts to appeal to Latinos, Spicer said,

“I mean, as far as painting Mexican Americans with that kind of a brush, I think that’s probably something that is not helpful to the cause.”

He was more directly critical of Trump when the candidate disparaged Senator John McCain by saying that he is not a war hero because he was captured.

Spicer said in a statement at the time,

“Senator McCain is an American hero because he served his country and sacrificed more than most can imagine. There is no place in our party or our country for comments that disparage those who have served honorably.”

Trump never apologized or expressed any regret for the John McCain’s remarks.

Finally, after the first Republican primary debate, Spicer said that Trump needed to actively work on getting his language under control.

What is Sean Spicer doing now? Having left the White House, Spicer succeeded to be on the red carpet: he made a cameo appearance at the presentation of the Emmy Awards on September 17, 2017 spoofing his own image by predicting that the Emmy’s broadcast would garner "the largest audience to witness an Emmys, period." He appeared on Extra, at Oscars, on The Late Late Show.

Spicer's net worth is evaluated at $14 million. He earned a yearly salary of $176,461 for his work as the White House press secretary.

Sean Spicer is married to Rebecca Miller Spicer, who herself used to have a job in the White House. His wife has experience in television, and she worked as the associate director of communications in the George W. Bush administration, being responsible for producing key televised events like bill signings, according to her profile on the National Council for Adoption website.

Prior to this, Rebecca worked in television news, spending many years producing the evening broadcast for an ABC affiliate in Washington, D.C. She was working this job when she married Sean Spicer on November 13th, 2004 at the St. Alban’s Episcopal Church in Washington, D.C. Her other TV jobs have included positions at KTRK in Houston, WTNH in New Haven, WVTM in Birmingham, and CNN in Atlanta.

Spicer spent 12 years in television news. She produced the 6 p.m. newscast at WJLA in Washington, D.C., which received the Outstanding Newscast Award from the Associated Press and received an Emmy Award nomination for coverage on September 11, 2001.

At the moment, Rebecca Miller Spicer is the senior vice president of the National Beer Wholesalers Association, which represents the interests of beer distributors. As the chief communications officer, she manages the communications strategy for the trade association, which represents 3,300 licensed, independent beer distributors nationwide. She manages internal, membership, and external communications and also develops and executes key public relations strategies related to the association’s advocacy priorities.

Rebecca has two bachelor’s degrees, the first in studio art and art history from the University of the South, and the second in telecommunications from Indiana University.

Rebecca and Sean have two children.

“See? I’m not alone. Other people think you’re not the ice cream of the future, too.” (The company reorganized its debt, stayed in business and kept selling its product.)