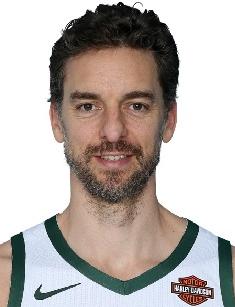 Currently, his rights belong to the new champions of the association, Toronto Raptors. So, they became the only brothers in history to win NBA titles. Pau has an estimated net worth of $65 million. Neither married nor single, he has a girlfriend.

Pau is from Barcelona, Spain. He was born in a family of basketball players. Although his mother had a medical education, and his father worked in a hospital, it didn’t stop them from playing basketball. Pau’s father had a height of 6”3’, only two inches higher than his mother.

Pau was their first child. He was born on July 6, 1980. His brother Marc was born, when Pau was five years old. At the age of six, their family moved to the Barcelona suburb, Sant Boi de Llobregat. Pau spent the rest of his childhood there.

Initially, Pau did not want to connect his life with the sport. He dreamed of being a doctor and of finding a cure for AIDS. That’s why he entered a medical school at the University of Barcelona. Later he left it because his of successful basketball career at FC Barcelona. Before switching to basketball, Pau was playing rugby. He also loved football.

Pau’s first basketball club was Cornellà, where he was playing a center position. His height gave him a great advantage above his teammates. So, when he took 16 years, he signed to a junior team of Barcelona. In 1998 he won his first medals. The junior national team invited Pau to play for them. Of course, he agreed. Spain became the champions of AST and FIBA Europe Championship.

Pau made a debut appearance in the senior team of Barcelona only on January 17, 1999. In season 1998-1999 Pau spent only two official games, played only 11 total minutes, for which he scored two rebounds and six points. In season 1999-2000 Pau played more often, appeared in 26 games with average scores 4.2.

Next season was the last for Pau in Spain. His 29 appearances in first 33 games of Barcelona, with 11.3 points and 5.2 rebounds on the average, and received the title of MVP of Spanish National Cup allowed him to enter the 2001 NBA draft.

One of the top players ever to play in Spain appreciated Gasol:

"In the Copa del Rey, he showed a lot of maturity despite the pressures and expectations that were thrust upon him. He was a matchup nightmare for anyone who played against him. He's got very, very long arms, and he's very active. If you defend him with a three, he's just too tall. If you defend him with a bigger guy, he'll drive and create fouls. He also showed a variety of post moves. And he plays with heart".

Spaniard became the third number of NBA draft in 2001. Atlanta Hawks selected him, and later sold his rights to Memphis Grizzlies. Pau showed the outstanding game during his first season and became the first foreign player, who could receive the Rookie of the Year Award. He scored 8.9 rebounds per game and 17.6 points on average.

Pau played in all regular games in first two seasons. It is still a great achievement not only for beginners but also for any basketball star. All in all, he spent 240 games in NBA before got injured on April 5, 2004. However, it didn’t prevent Pau from getting in the NBA playoffs that season. It was his first appearance there. The Grizzlies couldn’t win a single game in 2004, 2005, 2006 playoffs.

In 2006 Gasol was selected to the All-Star Game. In February 2008, Gasol was sold to the LA Lakers. Instead, Grizzles received the rights for Marc Gasol trade and Kwame Brown. Before Lakers, Gasol had managed to set a lot of record in Grizzlies, and he is still their all-time leader in many statistics.

First three seasons in Lakers were the most successful years of Gasol’s career. He was in his prime at that time. In 2008 he became the first Spanish player, who appeared in NBA finals. However, LA Lakers lost Boston in six games. Pau was the second leader of Lakers in playoffs’ statistics. Next season Spaniard was selected to NBA All-Star Game and won his first championship ring.

In season 2009-10 Gasol extended the agreement with Lakers, and won NBA twice. It was the last season of exciting Lakers. Next years the team was damaging. Pau Gasol was criticized a lot but continued to defend the team’s honor. He became the co-captain of Lakers. The final year of his contract was 2013-14. Pau became a free agent after its ending.

That time Pau was often compared to Chris Bosh. People wanted them to play together. Pau’s past teams made him great. And in summer 2014, he decided to sign with the team of another great player, Michael Jordan. Spaniard joined Chicago Bulls.

In the first games, Pau could gain career-highs blocks and points. He finished 2014-15 season as the NBA double-doubles’s leader. Next year he got his sixth call to Dream Team. At the age of 35, he made a triple-double.

Gasol received an offer from Spurs and signed with them on summer. In April 2017, he scored 20,000 career points. It was only the second time when a player from Europe could make that achievement. The first was German, Dirk Nowitzki. Next time Spaniard treated his injuries more often than played for Spurs. He spent some good games but left the team in March 2019. Two days later he moved to Bucks. On June 11, 2019 he announced his retirement.

Pau Gasol began representing his national team when he was a teenager. He played in several tournaments and has 14 medals of different value. He made his international debut with the senior Spain national basketball team in the 2001 EuroBasket, where Spain became 3rd.

Spain was one of the strongest national teams while Gasol was its member. They fought with the USA national team on equal terms. Pau won silver medals at EuroBasket in 2003 and 2007 and at Olympic Games in 2008 and 2012. He was also Spain’s flag bearer at the opening ceremony of the 2012 Summer Olympics and the highest-scoring player of the 2004 Summer Olympics. In 2006 Spain became the strongest world team on the FIBA World Championship.

In 2014, Spanish player became the member of best players’ team of the FIBA Basketball World Cup. The following year, he received the MVP of the tournament, following some outstanding performances, scoring 25.6 points and 8.8 rebounds per game. On 7th September 2017, he became FIBA Eurobasket’s all-time leading scorer.

Pau continued to be interested in medicine even after moving to the USA. In 2009, playing in LA, he decided to join the charity program benefitting the St. Jude Children's Research Hospital. Sometimes he communicated with doctors and observed the surgeries.

Pau is well educated. Apart from native languages, Spanish and Catalan, he can speak English, French and Italian. He liked to speak Spanish to Kobe Bryant when they were playing for Lakers. It helped to keep their plans in secret. Of course, Gasol was better than Kobe in Spanish.

Also, Pau likes to read, to listen to operas, and to play the keyboards. He was starring in the crime series CSI Miami, where played the role of a serial killer. SO, he is a multilateral personality. Watch his top 10 play, and you will love him.

Pau Gasol was dating a model Bojana Barovic in 2005. They broke up after three years. Then in September of 2009, Pau was in relationships with Spanish Cheerleader Silva Lopez Castro. They first spotted together in the NBA All-Star Weekend in the LA Sports Awards. But Silvia cheated on Pau with the husband of R&B singer Monica. And in March 2014, the couple separated.

Before Gasol started dating Lopez Castro, it was rumored he dated Chris Hemsworth’s spouse Elsa Pataki. Currently, he is romantically involved with Catherine McDonnell. Pau has a net worth of $65 million