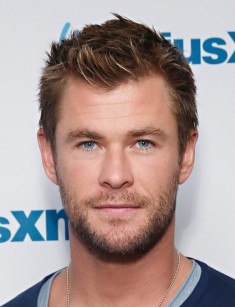 Chris Hemsworth is a Hollywood actor of the Australian origin. He earned his fame for the role of Thor in the Marvel universe: he appeared in the movies about this character and crossover blockbusters telling about the adventures of the Avengers.

Apart from the role of the Scandinavian deity, Chris’s filmography includes dozens of roles in full-length movies and series.

Chris Hemsworth was born in one of the largest Australian cities, Melbourne. He was born into the family of a social worker Craig Hemsworth and an English teacher Leonie Hemsworth.

There were three children in the family: Luke was two years older than Chris, and Liam was seven years younger. Today, Chris’s brothers are also popular actors, although none of them was going to devote their lives to cinematography. Liam Hemsworth is famous for the movie The Hunger Games, and Luke appeared in a popular series Westworld.

The boy went to the high school at Heathmont College, but frequent travels made his education fragmentary. The family moved often and finally settled on the Philip Island when Chris was 15; he spent his youth there.

The young man studied at school and took an interest in sports: he went to the gym, swam, and surfed. This hobby had a positive effect: Chris’s weight is 95 kg, and his height is 190 cm. The actor’s body is athletic, sculpted. His excellent shape helped him gain the roles of superheroes.

Since 18, Chris Hemsworth auditioned for various projects together with his elder brother. In 2002, he played King Arthur in the Australian and Dutch alternative historical children’s series Guinevere Jones. The young actor also got several episodic roles in the youth series Neighbors, Marshall Law, The Saddle Club, and Fergus McPhail.

The series Home and Away was the first more or less successful project: Chris played the role of Kim Hyde; although he was not the main character, his figure was quite notable. The actor appeared in some 170 episodes of the series and even received the local awards as the best debutant.

In 2009, Hemsworth felt he had enough of the Australian cinematography and moved to Hollywood. He appeared in three movies: Star Trek, A Perfect Getaway, and Ca$h.

Thanks to his professional approach to work and undoubtful acting talents, Chris Hemsworth caught the attention of producers. In 2011, the movie Thor based on the popular American comics for children and teenagers was released. Chris played the god of thunder and lightning; according to the comics plot, he lives in a different world, Asgard – just like in the Scandinavian mythology.

Thor came to the Earth when the father of the young god, the Asgard king Odin, banished his successor for being too arrogant, short-sighted, and cruel. The character lost his powers but found new associates with whom he was going to save the Earth and other worlds. The astrophysicist Jane Foster (Natalie Portman) became Thor’s main assistant in this mission. Anthony Hopkins personified Odin. The god Loki (Tom Hiddleston) became the central villain figure: he tried to gain Odin’s throne.

The comics blockbuster brought Chris Hemsworth fame. In a while, he appeared in the new movie The Avengers. The new movie embraced several Marvel movies that had come out earlier and created the whole universe from the separate projects. Thor, The Incredible Hulk, Captain America: The First Avenger, and Iron Man became the prequels of The Avengers. As the story runs, the superheroes united their effort and turned into a powerful team to fight the threat to the humanity; alone, none of them could accomplish that. Robert Downey, Jr., Scarlett Johansson, Jeremy Renner, Tom Hiddleston, and Samuel L. Jackson became Hemsworth’s stage partners.

Chris did not want to be seen as a one-role actor. He appeared in the psychological thriller The Cabin in the Woods, the military drama Red Dawn, and sports movie Rush based on the historical events. The actor chose the diverse roles on purpose; he proved he could look interesting and be sought after not only as a mythological figure or a superhero.

In 2012, for the first time in his career, the artist earned $5 million: the fantastic movie Snow White and the Huntsman brought him that sum. Kristen Stewart and Charlize Theron starred in the movie as well. Four years later, Hemsworth appeared in the movie sequel and earned $10 million.

Further on, in 2013, the actor participated in the sequel Thor: The Dark World. Two years later, another Marvel movie sequel, Avengers: Age of Ultron, came out.

The same year, the actor participated in the crime detective Blackhat and the family comedy Vacation. Chris Hemsworth often accepts several offers at the same time, so three or four movies starring him may be released almost simultaneously.

The man is responsible when it comes to work. When the role in the movie In the Heart of the Sea, the screen adaptation of the novel Moby-Dick, required losing weight, Chris did that. By the end of the shooting, he lost 15 kg. and his weight was only 80 kg. The artist was exhausted: sometimes, he almost fainted on camera.

In 2016, the long-awaited sequel Captain America: Civil War was released. The Avengers team split up into two parties, and all characters except for Thor were involved in the conflict; the actor did not appear in the movie. When fans asked what Thor was doing when his friends started the feud, Marvel presented a series of short funny videos about Thor’s life in Australia.

Soon, the premiere of the movie The Huntsman: Winter's War took place. The story distanced from Snow White’s line: she did not even appear there. It is the story of young Eric (Chris Hemsworth) who sneaked out of Queen Ravenna’s army; Eric’s reasons for revenge the evil queen become clear.

In July 2016, the movie Ghostbusters came out; it was the adaptation and reboot of the 1984 movie. Melissa McCarthy, Kristen Wiig, and Leslie Jones played the main characters. Hemsworth got the role of the Ghostbusters’ secretary. The movie received mixed reviews. Critics appreciated the plot and filming, but bloggers and journalists crushed the project and publicly rejected to watch the movie.

The first trailer got the maximum negative reviews in the history of YouTube and got a million of dislikes. Ghostbusters was banned in China which made a negative effect on the global box office.

The main complaint was about the idea of the 1980s movie where all the men were replaced by the female cast. Bloggers accused the movie of unnecessary feminism and insulting the franchise canons. In return, the movie representatives called such critics non-tolerant and accused them of being sexist.

There were several comments on Chris’s character: Kevin was called unbelievably stupid. Still, Kevin was a pretty accurate male version of the secretary from the original, and the assistant’s small mind was presented comically as well.

Later on, Chris Hemsworth came back to the role of Thor. In October 2016, he appeared in the scene after the credits in Doctor Strange.

The actor tried himself in modeling. Hemsworth is the spokesperson for the perfume Boss Bottled.

During the shooting of the series Home and Away, Chris met an actress Isabel Lucas. The young people were dating for a year, but their relationship reached a deadlock.

In 2010, on Christmas, Hemsworth married a Spanish and American actress Elsa Pataky; by that moment, they had known each other for several months. The woman is famous for the role of Elena Neves in Fast & Furious 4.

Chris and his wife live in Australia: the couple decided to settle there to bring up their children in a peaceful place, far from the paparazzi’s attention. There are three children in the family. The daughter India Rose was born in 2012; the twins Tristian and Sasha were born in March 2014. Hemsworth has a dog and three donkeys. His mansion is situated near a bay; together with his children, the actor can see whales and cachalots floating around.

Elsa Pataky’s mother is delighted by Chris Hemsworth and calls him the best father for her daughter’s children she could ever dream of.

Chris continues to do sports. He participated in the Australian show Dancing with The Stars where he became number six.

Hemsworth has a verified Instagram page. Judging by the numerous photos with his children and wife, the actor does not keep secret his personal life and shares the joy of interacting with his nearest and dearest.

The actor is a passionate fan of surfing; he often publishes microblog posts about his hobby.

2017 gave the Australian actor the chance to play the lead role in the fantastic comedy Thor: Ragnarok; the movie grossed $800 million. Chris’s character no longer had his long, blond hair that used to be Thor’s trademark. The new haircut made him look less like a Scandinavian god. As the story runs, Thor lost his axe again and got captured; he had to fight in gladiator games and go against his friend and team member Hulk.

The story is set after the events of Avengers: Age of Ultron and simultaneously with Captain America: Civil War which explained why Thor did not take part in the Avenger’s fight.

In 2018, the third part of the popular blockbuster, Avengers: Infinity War, enriched the actor’s filmography. Separated, the Avengers had to unite with Guardians of the Galaxy against the space threat: the supervillain Thanos.

The box office reached $2 billion. The movie was created in secret: the lead actors Robert Downey, Jr., Mark Ruffalo, Chris Evans, Scarlett Johansson, and Benedict Cumberbatch worked on false scenarios and did not know the movie plot: the producers did that on purpose so that the story details would not be revealed earlier than the movie release.

The next Marvel movie, Untitled Avengers 4, is being made now. The Australian actor will appear in the familiar role. As the producers announced, even the characters who had died in the previous movie will appear, although they will not be present on posters.

Chris Hemsworth is said to appear in the fourth part of Men in Black; Steven Spielberg will produce the movie. The actor and Tessa Thompson will play the main characters. The fourth part of Star Trek is another upcoming movie where the artist will participate.

In the new detective thriller Bad Times at the El Royale created by Drew Goddard, Hemsworth got the lead role. His character, a priest, a singer Darlene, a vacuum salesman, and a Southern girl gather in a hotel for a night; evil things occur there. Dakota Johnson, Jeff Bridges, and Jon Hamm also starred in this project.

Chris Hemsworth got into the top highest-paid actors of the year. George Clooney became number one; Dwayne Johnson, Jackie Chan, Chris Evans, Will Smith, and Adam Sandler were also included in the rating. 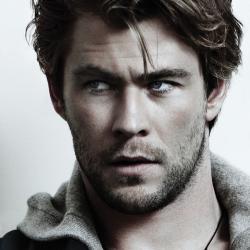