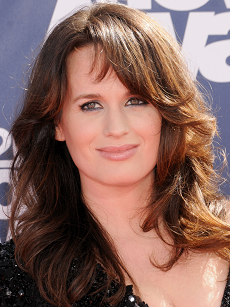 The Michigan native, Elizabeth Reaser, started her movie career in 1998, one year before her graduation from the Juilliard School. She became a recurring guest star on the TV drama Grey's Anatomy, which earned Reaser her first Emmy Award nomination. She is best known for her role as Esme Cullen in all five installments of the Twilight movie series. She is not married. Reaser’s net worth is roughly estimated at $2 million, including all of her properties and earnings. The actress accumulated it through her TV and movie career.

The hometown of Elizabeth was Detroit. She appeared on July 2, 1975. Her father, John, worked as an attorney, was a restaurateur and then became a substitute teacher. Elizabeth’s mom, Karen, was a housewife and brought up three children. Elizabeth was the middle child of three girls and wore braces for a long time.

Reaser attended a Roman Catholic school located in Bloomfield Township and Auburn Hills’ high school. During her studying, Elizabeth worked several odd jobs, including being a caddie at a country club. However, she dreamed of being famous actress. After graduation from the school, Elizabeth enrolled at Oakland University in Rochester Hills. She dropped it in a year to be accepted into one of the most prestigious drama programs in the country, Juilliard’s drama program.

Juilliard was difficult, but Elizabeth overcame the difficulties and was awarded by B.F.A. in May 1999. Finding work in her chosen field was no piece of cake. Having gone to Juilliard opened a few doors. But it was essential to find acting roles so she could invite agents and hope against hope that they’d come and see her.

To collect at least any resume, Elizabeth undertook any projects in theaters and on TV. Reaser started from a recurring role on Guiding Light with critically lauded appearances in productions of Sweet Bird of Youth and The Winter's Tale in Los Angeles and New York. Elizabeth made her breakthrough in Blackbird of Adam Rapp. Before moving to off-Broadway the performance was released in London.

The Reaser’s stage playing attracted the attention of several moviemakers. She appeared in a crime TV series, The Sopranos in 2000, and Law and Order: Criminal Intent in 2002. Soon, Elizabeth received her first movie roles. She made small but significant appearances in The Believer (2001) and Thirteen Conversations About One Thing (2001). In 2004 she played Malissa Zubach in the Showtime TV feature Mind the Gap, where she performed a young North Carolina native who aspired to escape her lower-class background.

In 2005, the Bloomfield native filmed in Marc Forster's Stay as a love interest to Ryan Gosling's mysterious mental patient. The same year Elizabeth filmed in one of the most important and best projects of her career, Sweet Land, an independent period drama movie written and directed by Ali Selim. She played the main role of Young Inge Altenberg. Newport Beach Film Festival’s Jury recognized Reaser, the best actress for the playing in that movie. She made a great impact on the movie’s commercial promoting.

Reaser's success continued when she landed the role of vampire Esme Cullen, the adoptive mother of the Cullen siblings, in Twilight in 2008, a movie based on the first installment of the best-selling book series by Stephenie Meyer. Reaser had never heard of the books before her audition. Reaser appeared in all five movies of the Twilight series. The last part was released in 2012.

Reaser also performed on the theaters’ stage. In 2014 she debuted on the Bay Street Theatre with the World Premiere of Conviction. Apart from Elizabeth, the cast included Garret Dillahunt, Sarah Paulson, Brian Hutchison, and Daniel Burns. Played in One and Two and Hello, My Name Is Doris in 2015, Reaser also starred in supernatural horror movie, Ouija: Origin of Evil, alongside Annalise Basso and Lulu Wilson.

Reaser began her TV career in 1998, playing Molly in Sports Theater with Shaquille O'Neal. Apart from mentioned above, in 2000 – 2006, she was a cast member of Hack, Saved, Standoff. The Reaser went on to land her breakout role as Jane Doe (also known as Rebecca Pope) on the hit TV drama Grey's Anatomy. The storyline her character was involved in became one the show's most memorable plot twists. She played a pregnant mother suffering from amnesia following an intense ferry accident.

Reaser appeared in 18 episodes and went on to earn both Emmy and Screen Actors Guild Award nominations for her work. Also, she was the main star of The Ex List and Manhunt: Unabomber. In 2015 Elizabeth appeared as Diana Baur in one episode of Mad Men. Soon she became the cast member of Netflix’s comedy-drama anthology series Easy alongside Michael Chernus, Jane Adams, and Zazie Beetz. In 2019 Elizabeth got the role of Mrs. Winslow, the Commander’s wife, in The Handmaid's Tale. She became both a friend and a source of inspiration to Serena Joy.

In the 2010s, Elizabeth Reaser was registered by PETA as a vegetarian. In 2011 she was romantically involved with director and writer Gavin Wiesen. It was the only known story of her relationships, as Elizabeth keeps her private life in secret. She is not married and is without a husband or a child at the moment. She is active on social media, and her Instagram has more than 250k fans.