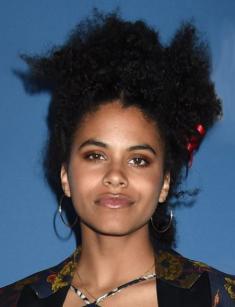 Young Hollywood actress Zazie Beetz became famous for playing the role of surly Vanessa in the comedy-drama television series Atlanta. After the release of the first season, the Amer-ican press called the story about rappers seeking success a breakthrough. Fans enjoyed the ap-pearance of the actress in the second part of the superhero action movie Deadpool and stated that African-American artists need to be given more lead roles. There is no actual information about the salary and net worth of the actress. However, according to some information, her net worth is estimated at approximately $1 Million.

Zazie Beetz’s family can be called international. Her mother is African-American, and her fa-ther is German. The girl was born in the early summer of 1991 in Berlin. She grew up in Man-hattan and studied at Muscota New School, Harlem School of the Arts and LaGuardia Arts High School. At Skidmore College, the future actress received a bachelor's degree in French. However, at home, the family speaks both German and English. The actress has a younger brother named Justin.

Later, Zazie moved to Harlem and started looking for work and went to auditions and cast-ings. She participated in theatrical productions Metamorphoses, Death of a Salesman, Lost in Yonkers, The Woman. Josephine Baker, Billie Holiday and Nina Simone influenced Beetz as an actress.

In 2015, Beetz created her own website, rather like a diary in which the actress shares the events of life, as well as her thoughts and plans.

Beetz's creative biography began in 2013 with a starring role in the short film The Crocotta, followed by another in a movie called Beasts. The following year, Zazie expanded her filmog-raphy. In 2015, the movie Applesauce was released. It is a comedy about two couples whose already complicated relationship has been complicated by the maniac psychopath.

The plot of drama James White is focused on a young man who lives and enjoys life. And only the news of his mother's illness makes the protagonist take up his mind and start thinking about the future.

2016 was a landmark for the actress. Zazie got the title role of the popular TV series Atlanta which tells about two brothers, one of whom is on the way to success, and the second is try-ing to settle in after. The episode Value especially impressed viewers and critics. And Beetz's acting attracted attention the most. The actress was called a new star.

Remembering how she got into the fateful film, Zazie said that she was not preparing for the audition as the invitation was unexpected for her. And for this reason, at first, the actress thought that she had played not good enough and it would be pointless to wait for the con-tinuation. But when three weeks later she was called and invited to the audition in front of the camera, Beetz did her best to make directors choose her.

Besides, according to Zazie, the decision of Donald Glover, the creator of the series, was in-fluenced by a curious case. Desperately looking for actors, the director watched one of the tapes with the participation of Beetz. At this time, Donald's acquainted walked by and said that she kept in touch with the actress from the screen. And Glover thought that it was a good idea.

Zazie was against the fact that Atlanta was considered a comedy. Working on the film, she tried to focus on explaining the reasons why her character constantly felt between a rock and a hard place, and how Vanessa deserved this.

Moreover, Beetz does not consider herself as a comedy actress. She can be funny only if she feels that way, but not as the director dictated. In addition to Atlanta, Zazie also starred in the Netflix comedy series called Easy with Emily Ratajkowski, Orlando Bloom and Gugu Mbatha-Raw.

According to the actress, the movie allowed her to immerse herself in acting entirely. Atlanta and Easy, along with a few other projects, definitely approved her to maintain that lifestyle when she was just doing her job, which was such a great gift, Zazie said.

Independent drama Wolves, filmed by Bart Freundlich, was shown at the Tribeca film festi-val. Wolves is the name of the school basketball team, and its star is Anthony played by Michael Shannon. The guy is going to have a bright future until his father appears at home with an irrepressible passion for gambling. Zazie played Victoria, Anthony's girlfriend.

In the sci-fi thriller Geostorm, the actress got the character of a hacker named Dana, who helped to discover the climate weapon. Famous "Spartan" Gerard Butler portrayed the protagonist and the savior of the world. And Andy Garcia played the role of President of the United States. Although the movie raised the current topic of global warming, it had not caused enthusiasm among the audience.

In her profile on Instagram Zazie often posts images with the actor and producer David Rysdahl, and comments to them are full of tender words. This led her fans and the media to believe that they are dating, and which is more, their relationship is serious. Some of the American tabloids are already calling to wait for the announcement of the imminent engagement. Nevertheless, she still has no husband.

Beetz supports the feminist movement and advocates the spread of a culture of peoples whose skin color is different from white. In this concern, she finds support from David.

The musical-comedy series Atlanta received a Golden Globe Award in the category Best Television Series and has been prolonged for a second season. The first episodes of the second season premiered in March of 2018.

In May 2018, the continuation of the story about the X-Men, the movie Deadpool 2 was shown on big screens. A year earlier, producer and lead actor Ryan Reynolds revealed the secret of who would play the mutant albino Domino. Zazie Beetz was entrusted to portray the character.

The results of the casting surprised fans. According to the Hollywood tabloids, some more famous actors had auditioned for this role: Kerry Washington, the star of the series Scandal, Gugu Mbatha-Raw, a nominee of the British Independent Film Awards, Sienna Miller and even Janelle Monáe, who was nominated for Grammy for six times. The last one, by the way, was considered to be a leader among other candidates.

During the filming of the sci-fi thriller, Zazie's stunt double tragically died. According to witnesses, Joi Harris lost control of the motorcycle and at high speed drove into the window of the building. As reported by Deadline, the production team complained about the long hours without days off, and according to the story, the motorcycle racer did not have a helmet.

At the Sundance Film Festival, the drama Dead Pigs starring Zazie Beetz received a special jury prize. The name of the celebrity is listed in the cast of one of the most anticipated horror movies of 2018 Slice. This is the product of an independent distribution company A24, familiar to viewers from the movies Green Room, Tusk, and It Comes at Night.

At present, there is no information about Zazie's net worth.