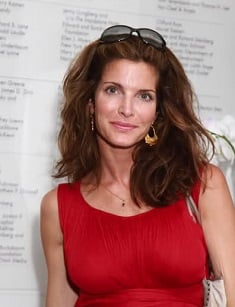 An American model and a wife of a Rockstar had a bright and successful career and a stormy youth. Today she prefers to stay from the limelight, but it wasn’t always like that.

The girl had Dyslexia. Her mother, Venetia Stevenson, was from the creative industry too, she worked as a clothing designer. Her dad was a famous rock star, the singer of the band The Everly Brothers. Her dad had a significant influence on her. Her father had problems with drugs, as a result, the family was broken. That time Erin was only seven. Later Everly confessed she had any bad memories about her father, but she didn’t remember nothing at all.

Erin had two siblings who decided to work in the entertainment industry too. The girl decided to be a performer and worked much to polish her skills. Erin attended a private school for a while but then had to go to public school due to financial problems of her family.

Being inspired by her father’s success and popularity, the Rockstar’s daughter decided to move to New York in 80s and started to work as a model. She took part in print advertisements and commercials and also did brand endorsements for various top designers.

Besides her career as a model, she appeared on two videos “Sweet Child of Mine” and “Welcome to the Videos”, she never starred in movies. Now her net worth is more than $1 million.

Besides her bright appearance and modeling, she was in the limelight as a girlfriend and then wife of Axl Rose, the singer of Guns N’ Roses. At the age of 19, she met him at a party, later they became a couple and married in 1990.

She inspired the popular band to write the song “Sweet Child O' Mine” which became a legendary hit. Erin appeared in two videos of the group. Besides, Axl devoted to her several songs “November Rain”, and “Bad Obsession” among them. Erin was a roommate with Meegan Hodges who was a girlfriend of Slash, the lead guitarist of Guns N’ Roses. In 2007 Slash revealed that once Axl and David Bowie came to blows over Erin.

People didn’t believe that the relationship of Axl and Erin could be long-lasted and happy. They fought and quarreled many times, and she or her neighbors had to call the police.

Their relationship lasted for four years, Erin and Axl were anxious and exhausting. Erin told that on 27 of April 1990 Axl came to her in a dark night and said if she didn’t marry him, he would commit suicide. Next day the couple married.

Erin’s pregnancy gifted them hope for a happy future. Axl looked forward to becoming a father. But it wasn’t going to happen, Erin had a miscarriage. That fact crashed all their hopes. Axl came to the house where they were going to live after the birth of a child and crashed it.

Their marriage lasted for nine months and brought much suffering to the young girl. She became a victim of domestic violence and had to finish an abusive relationship. They got divorced in 1991. After divorce Axl tried to recover their relationships but it was in vain. Soon he was in a relationship with another model Stephanie Seymour. Recently the son of Stephanie, Harry Brant commented his photo on Instagram where he mentioned Erin presenting her in a bad light.

After divorce Erin had big money trouble, lived at her friend’s house but never saw Rose again. In 1994 Erin filed a lawsuit against her ex-husband. Axl paid Erin more than $1 million.

After the divorce, she dated Anthony Kiedis, Matthew Nelson, David Arquette. But her second wedding happened only in 1997 when Erin became a wife of John C. Portman. The couple lived in Atlanta, they had three children, but their marriage came to an end in 2006.

Today Erin and Axl had a friendly relationship. The model was at his concert in 2011, which was held in Atlanta. She supported the singer after the scandal with a photographer who added to his exhibition a photo of the garage with the title “Sweet Child O’Die you R 1 of many nothing special”. This photo hinted that Axl wrote it, but he never did it.

In 2013 Erin shared some photos from the past where she was with Axl on Instagram but later deleted them. Now she is dating with the not public person. She gifted him a daughter in 2009. In August 2015 Erin was arrested after she had attacked her boyfriend with a knife.

Erin has a muscular body, but she has never revealed her body measurements. After her loud relationship with Axl Erin prefers to keep law social profile and lives away from the limelight. As a result, we know less about her biography in the latest years.