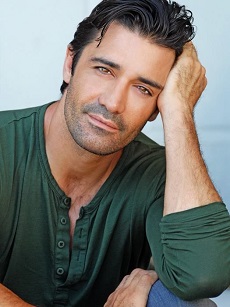 Gilles Marini is a famous American actor of French-Italian nationality, mostly known for playing in the film Sex and the City (alongside Kim Cattrall) and in the American television shows Brothers & Sisters, Switched at Birth and Devious Maids. Besides, he was the runner-up in season 8 of Dancing with the Stars and was one of the returning celebrities in season 15. He has also co-hosted the Netflix show Ultimate Beastmaster. He is currently acting as Ted in Days of Our Lives.

Let's emerge in the world of cinema alongside Gilles Marini!

Gilles Marini was born on January 26, 1976, in Grasse, Alpes-Maritimes, France, to the family of Greek mother and Italian father. At an early age, Marini got acquainted with hard work – he served as a baker in his father's bakery since he was eight years old.

Having graduated from a high school, Marini joined the French army and was stationed in Paris, where he served as a fireman in the Paris Fire Brigade.

In Paris, Gilles met Fred Goudon, a photographer who introduced him to the world of modeling. After fulfilling his military duties, he left for the United States in order to learn English while working as a model. He has struggled with his French accent for some time. He began his career as a model in his early twenties. One of the first projects he took part in was a television commercial for Bud Light beer.

Gilles Marini made his acting debut when he was 29 – he starred in the 2005 horror movie Screech of the Decapitated. The same year, he got the role in the series The Bold and the Beautiful. Then in 2006, Gilles Marini was invited to many movies and TV programs, such as Passions, Criminal Minds, Windfall and Ugly Betty. Besides, Marini appeared in the flick The Boys & Girls Guide to Getting Down the same year.

In 2007 fans could see the actor playing in the short movie L'Une et L'Autre. The next year, Gilles worked in the drama Brothers & Sisters.

2011 was marked by the start of Marini's working in the series Switched at Birth – there he played Angelo Sorrento.

Generally, the 2010s were prosperous for the actor. So, he appeared in numerous pictures, such as Scruples and The Last Rescue, Castle, Modern Family, Hot in Cleveland, Royal Pains and 2 Broke Girls, Devious Maids.

In 2012 Marini worked in the picture Puss in Boots: The Three Diablos alongside Antonio Banderas.

In 2016 Marini starred in an episode Daredevil and Bones. That year, Marini also appeared in three episodes of Teen Wolf.

Gilles Marini’s net worth is evaluated at $1.5 million.

Dancing with the stars

In 2008 Marini started appearing on the reality dance competition Dancing with the Stars. Gilles and his professional partner, Cheryl Burke, got the second place in eighth season after successful tango performance. On May 19, 2009, then seventeen-year-old gymnast Shawn Johnson and her partner, Mark Ballas, were named champions of that season, winning Marini & Burke by 1%.

Besides, he has been paired with Peta Bollywood on the show.

In 1998 Gilles Marini married Carole. Marini and his wife had been dating for some years before tying the knot. The spouses have two adorable kids together: son Georges and daughter Juliana.