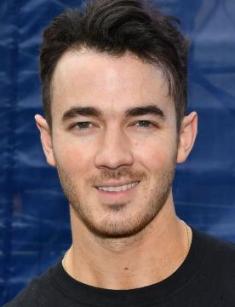 The group Jonas Brothers found its place in the modern show business thanks to Kevin Jonas’s voice. The Columbia Records producers were going to reject the beginning musicians, but they liked the man’s charming tone color. Today, Kevin Jonas is a popular musician, actor, entrepreneur, and a happy family man.

Kevin Jonas II was born on November 5, 1987, in Teaneck, New Jersey. He became the first child in the family of the singer and sign language teacher Denise Marie Miller and the songwriter, musician, and former ordained minister at an Assemblies of God church Paul Kevin Jonas Sr. Later, three other boys were born: Joe (1989), Nick (1992), and Frankie (2000).

The boys grew up in Wyckoff, New Jersey. The place was quiet and hardly suitable for the future celebrities. To amuse themselves, the brothers created the group Sons of Jonas. In the mid-2000s, Nick offered to send their recordings to producers, and the confident young men chose Columbia Records.

At the beginning of 2005, the Columbia Records president Steve Greenberg listened to the group’s demo “Please Be Mine”. He was going to reject the too young boys, but Nick’s deep and surprisingly adult voice impressed him. Eventually, Greenberg offered a contract for three albums, and Jonas Brothers came to existence.

August 2006 brought the limited edition of the debuting album It's About Time: only 50 000 copies; naturally, it was not a commercial success. Perhaps, it was the company’s fault since it was not particularly interested in promoting the musicians. At the beginning of 2007, Jonas Brothers found itself without a recording company.

The same year, in February, Hollywood Records began to collaborate with the siblings. They appeared on the GAP store posters and created the advertising jingles for Baby Bottle Pops.

August 2007 was marked with the second studio album and reached the top five at Billboard Hot 200; “SOS” was the most popular song that appeared in music charts in Australia, Canada, Germany, Italy, Ireland, Great Britain, and the United States. The boys were recognized far beyond their home country.

The third album, A Little Bit Longer, was presented in August 2008 and proved to be a tremendous success; it immediately reached the first place in Billboard 200. The album was notable for the singles “Burnin’ Up”, “Lovebug”, and “Tonight”; radio channels still broadcast them as the 2000 classics. Rolling Stone put A Little Bit Longer to the 40th position in the top 50 albums in 2008; the song “Video Girl” was named number 49 in the top 100 songs of the same year.

The next year, the brothers repeated the success with the fourth album, Lines, Vines, and Trying Times: it topped Billboard 200 and sold 247 000 copies within the first week after the premiere.

The boy band’s popularity grew thanks to music videos and Disney Channel series. However, in May 2012, Jonas Brothers left Hollywood Records and announced their split-up in October 2013.

Unlike Nick and Joe, Kevin has not presented solo albums. Music could be only a hobby for him, not the meaning of his life.

In 2008, the movie Camp Rock was premiered; the brothers played the musicians of the group Connect 3. The sequel Camp Rock 2: The Final Jam followed three years later.

Right after the first movie was broadcast, Disney Channel launched the reality show Jonas Brothers: Living the Dream. The audience could see the artists’ life during the Look Me in the Eyes tour that supported their second album; the shows were held in May-September 2008. The program was renewed with the World Tour.

In May 2009, the brothers appeared in the original series Jonas.

Kevin has also appeared on the screen without his brothers. For instance, the musician told about his teenage life at When I Was 17 on MTV. In 2012, Kevin revealed some personal details in the reality show Married to Jonas: one could see Kevin and Danielle’s daily life and live videos from the studio where the brothers were working on the next album. The final episode was released in May 2013.

The celebrity met his would-be wife, Danielle Deleasa, in May 2007 in The Bahamas. On July 1, 2009, the lovers announced their engagement and married in December.

There are two children in the family. On February 2, 2014, the daughter Alena Rose was born. Two years later, the man posted a picture of his wife with a belly on Instagram. The second daughter, Valentina Angelina, was born on October 27, 2016.

Kevin is an evangelist; just like all his family, he has been wearing a purity ring since 16.

As the group broke up, Kevin devoted himself to business: he organized the construction company JonasWerner and became a co-CEO of Blu Market that worked in the communication sphere.